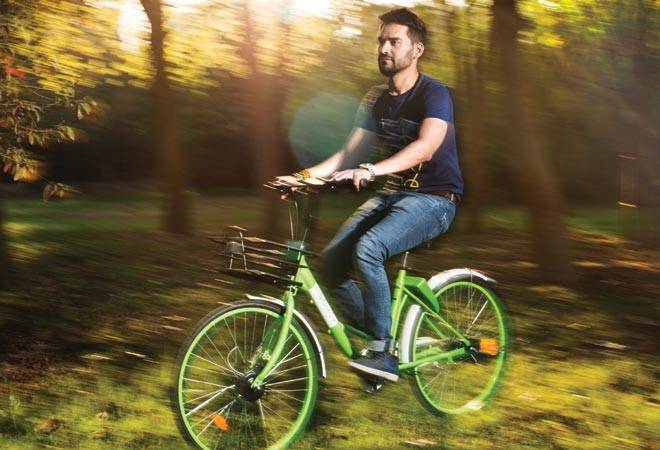 Anveer Khan, who works at Cognizant Technology services in Bangalore, used to take an auto from his apartment in HSR Layout to reach the nearby bus stop. He would pay Rs 70 for the three-km ride, which, aside from occasional spars with drivers, was always uneventful. But just two months ago, Khan bid adieu to this two-year-long routine and embarked on a new cycle of life, literally. The 25-year-old now pedals his way to the bus stop, thanks to Pedl, a bike-sharing service launched by car-on-hire company Zoomcar. Right in front of his apartment, Khan picks up a Pedl bicycle, unlocks it using the Pedl app on his smartphone and merrily rides away. Once at the bus stop, he locks the cycle and leaves it there for another traveller to use. Pedl deducts just Rs 1 from Khan's Paytm wallet for the service. "My daily travel has become much easier and cheaper now. I'm also getting my daily dose of exercise along with the satisfaction of going green," beams Khan.

Khan belongs to a new crop of customers enjoying the emerging technology-enabled dockless bicycle sharing ecosystem in India. Dockless bike-sharing, as the name suggests, does not require a docking station; the cycle can be located and unlocked using a smartphone app.

Last October, Zoomcar launched Pedl in Bangalore, Chennai and Kolkata. The company now operates in 10 cities. Ola Pedal, the cycle sharing service from cab aggregator Ola, is currently in pilot stage in college campuses across the country. In December last year, China's Ofo, which has a presence in 19 countries, announced its India entry. "The whole system will make a disruptive change in the current traffic condition and solve the congestion issue in Indian cities," says Rajarshi Sahai, Director of Public Policy & Communications, Ofo. 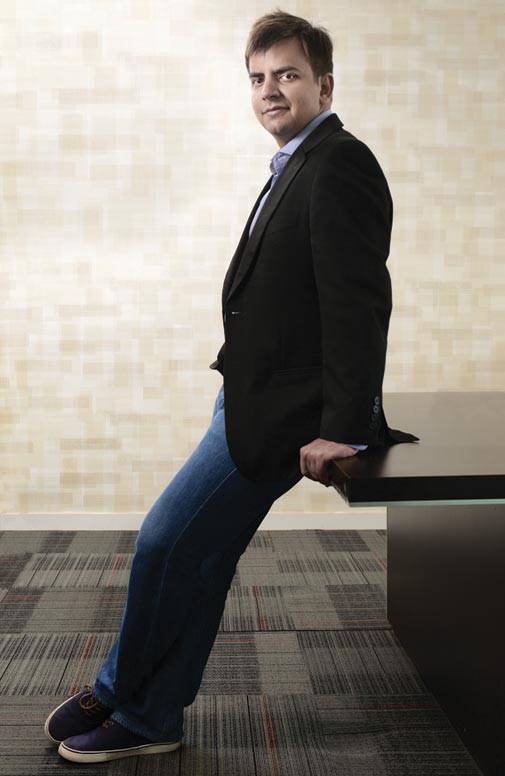 Besides, start-ups such as Yulu, Mobycy and LetzCycle, among others, are exploring this space. The largest manufacturer of bicycles in the country, Hero, is also venturing into this market. "Hero Cycles wants to make cycling happening in this country," says Pankaj M. Munjal, Chairman, Hero Motors Company. Its bike-sharing venture Hexi is operational in the University of Punjab and will soon be launched in Visakhapatnam, Pune and Bengaluru.

The market for technology-enabled bicycle-sharing is only a few months old in India, unlike in China, for example, where the Ofo bike-sharing model has been a success. "The commuter bicycle market has been almost completely disrupted in China, with nobody needing to buy bicycles anymore. Even stealing a bicycle doesn't make any sense because they are so easily available and practically free at that," says Aditya Munjal, Director, Hexi, about the rising popularity of the concept.

Apart from reducing our reliance on cars and other motor vehicles, dockless bicycle sharing services can also resolve last mile connectivity gaps. Sahai says, by encouraging a bicycle-friendly culture, the company hopes "to steer social change towards lesser vehicles on the roads, minimising carbon emissions". This makes sense given that India houses three of the 10 cities with the worst traffic conditions, according to a recent report from the World Economic Forum.

Globally, China leads the bike-sharing market. Its market was reportedly valued at around 10.28 billion yuan ($1.62 billion) in 2017, with the number of shared bike users hitting 209 million, according iMedia Research. This is expected to touch 17.82 billion yuan ($2.81 billion) by the end of this year and 23.68 billion yuan ($3.73 billion) by 2019. Consultancy firm Roland Berger notes that of the 10 million bikes shared globally, seven million are in China. Data from the Chinese government claims that this system has saved the country's transportation an estimated 16.1 billion yuan ($2.54 billion). Studies predict that by 2020, the size of the global market for bike-sharing will be $3-4.5 billion, growing at 20 per cent per annum.

"We are seeing a big market opportunity in this space," says Greg Moran Co-founder and CEO, Zoomcar. Due to affordability and availability issues, taxis, buses or even autorickshaws are not a viable option for short-distance last-mile connectivity in most parts of India, notes Moran. He believes, with the advancement in Internet of Things (IoT) - a network of web-connected equipment from refrigerators and fans to cars and cycles - dockless bicycle sharing system can do a lot better here, he feels. "It is catching up fast; we are seeing a growth of 50 per cent month on month and witnessing about 15,000 rides a day."

Given its traffic-solving ability, Akash Gupta, Founder and CEO of Gurgaon-based Mobycy, expects the industry to flourish in the next couple of years. "It is very much profitable. With only 500 bicycles deployed, we are witnessing more than 3,000 rides per day currently in Gurgaon alone and have crossed 30,000 downloads," he says. Apart from Gurgaon, the company has presence in seven other cities including Bangalore and Jaipur. 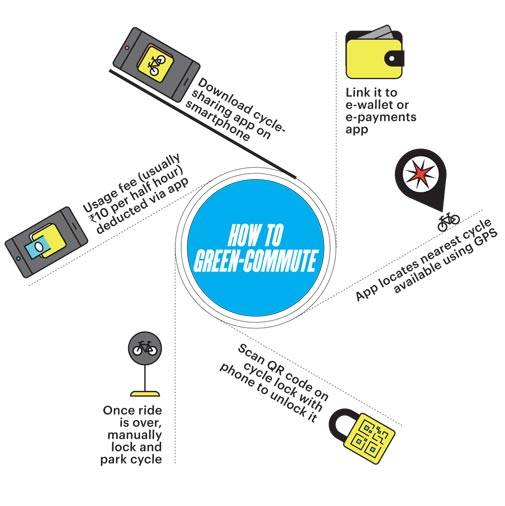 Amit Gupta, Co-founder, Yulu, a Bangalore-based start-up founded in January this year, says the need for app-based bicycle sharing services especially in tier 1 and tier 2 cities, given the large working population and ever-growing number of new cars hitting the roads each day, is immense. Yulu, Gupta claims, is clocking almost 20,000 rides a day.

Ola Pedal, too, claims to get good traction. "We are seeing massive interest from campuses and cities," says Bhavish Aggarwal, Co-founder and CEO of Ola. Buoyed by the response, the company is working on expanding the scope of the offering.

Bike-sharing companies are pinning their hopes on India's Smart City Mission, which they believe will boost the business. "Our expansion across India is very much in line with the country's smart cities vision," says Sahai of Ofo. "App-based bicycle sharing will make transport in these cities smart." The government project is aimed at making 100 cities in India citizen-friendly, technologically-enabled and sustainable.

The ride is not all smooth though. Cycle riders and companies offering bicycle-sharing are aware that the infrastructure in India is riddled with problems. "Our roads are not at all cycle-friendly. We have to be extra careful during peak hours and also while crossing. Even at junctions, we don't have a signal for cycle crossing," says Sanjeev Vasudevan, cyclist and PhD scholar at IIT Madras, where Ofo offers its services.

Amit Gupta of Yulu informs that only five per cent of the roads in India are cycle-friendly. "This is a major stumbling block," he says. He, along with other service providers, is in talks with the government and civic bodies to ramp up the ecosystem. "Till the market matures, we have to balance the growth of the business with the existing infrastructure in a way that will minimise the negative externalities to the population," says Sahai.

These companies are also working with regulators and governing authorities to identify and demarcate designated parking areas, and also educating the community on responsible biking practices. Besides, issues related to connectivity and risk of theft also need to be addressed. "We are in talks with the municipal corporation of whichever place we are operating in to solve the infrastructural concerns," says Moran of Zoomcar. Even if the system-related woes can be resolved, issues like weather could play spoilsport. The extreme weather conditions, especially in North India, can be a hindrance. However, companies are confident that a cycle-friendly infrastructure is what matters most. "Our experience in other countries prove that if there is a more matured infrastructure for cycling, people will use the cycle despite deterrent weather," Sahai says.

Gupta of Yulu, too, is unperturbed. Weather usage surveys, he says, have shown cycle usage never comes to a complete halt due to extreme weather conditions; only the usage may drop to a maximum of 30 per cent.

Globally, the issue of wastage is rearing its head. Recent reports on the Chinese bike-sharing market highlight that there are too many cycles, while the demand is insufficient because of which cities are flooded with abandoned cycles. The US and Australia face a similar situation. Authorities in Beijing, for instance, have formulated specific standards for dockless services, asking companies to facilitate parking and instructing them to provide a digital map to users educating them about the parking areas.

India, however, need not worry about this problem of plenty just yet. In China, there are around 40 bike-sharing companies, whereas here, the market is only taking wings. "Currently, China constitutes more than 75 per cent of the global bike-sharing market and India constitutes less than one percent," says Gupta of Yulu.

Bike-sharing companies have their eyes on scaling up the business by expanding the user base this year. "The Indian market has the same potential as China. We envisage the user base to increase to 250 million by the end of next year in India. It will disrupt transportation in the country," says Gupta of Mobycy. The company hopes to raise around $5 million in the next few months and expand to 12 cities by end of the year with 30,000 bicycles in its armoury. "The business will be profitable when we hit five rides for a cycle per day, hopefully, in a year or two," he says.

Till now, Mobycy has received half a million dollars as investment from angel investors. Ofo raised $1 billion globally in its last round of funding from investors including e-commerce group Alibaba. Zoomcar, the parent company of Pedl, has raised $40 million in Series C funding led by Mahindra & Mahindra in February.

Urban transport experts expect that the monies pouring into this space will achieve what activists and civilian organisations could not in the past few years - make green commuting a reality on Indian roads.

Tanveer Khan and his ilk would be pleased.