Amazon launched its certified refurbished category in India last year. And already, it has become one of the rapidly growing segments for the e-retailer. The refurbished mobile phones segment, in particular, is on a tear, claims Amazon India. "We sold as many certified refurbished products in the first three months of 2018 as we did in the first nine months post launch," says Vivek Somareddy, Director - Seller Services, Amazon India. "There is a promising customer demand across categories including smartphones, laptops, headphones, watches, small appliances and Kindle e-readers."

Amazon is not alone. ShopClues, eBay (now part of Flipkart) and Snapdeal have had dedicated refurbished categories for the past few years and the e-tailers are seeing brisk business. Research firm Counterpoint estimates that the global market for refurbished smartphones alone grew 13 per cent year-on-year in 2017, reaching close to 140 million units, while the market for new smartphones grew only three per cent. Research firm Deloitte sees the Indian used smartphone market growing at a CAGR of about 32 per cent and reaching 46 million units in 2020, generating a revenue of $4 billion. Not only smart phones, but laptops, home appliances like LED television sets, refrigerators, home theaters, etc., are in demand in the recommerce market. According to industry experts, after smartphones, laptops and desktop computers are the most sought after items, followed by LED televisions, headphones, home theatres, watches and refrigerators.

"It is a high margin business," says Anil Talreja, Partner at research firm Deloitte Haskins & Sells, who tracks the consumer sector. "Earlier, the refurbished market was dominated by the grey market and unorganised local retailers," he explains. Now, this market is being taken up by organised players who provide warranty, repairs with genuine parts and also after sales services. New-age recommerce companies started branding the grey market and helped customers gain confidence in second hand products and "their business model is different from that of online classified sites like Olx or Quikr," adds Talreja.

According to industry experts, recommerce business is a win-win deal for both the sellers and consumers. For example, while a brand new mobile phone provides a margin of around 5 per cent, a refurbished model can fetch a margin up to even 10 per cent, or more. For users, its an opportunity to buy high quality aspirational products at more affordable prices. "With organised players coming into the market, customers can save up to 50 per cent while purchasing a refurbished product compared to a new product," says Somareddy.

A wide category of products fall into the reverse commerce market - factory seconds, returns from retailers and e-commerce companies, open box products, second-hand-and-repaired products, and more. "Consumers are interested to buy premium products such as iPhone, home theatre systems or smart kitchen appliances, but they are not willing to pay retail prices. Refurbished products fit their bill," says Dipanjan Purkayastha, Founder and CEO of Kolkata-based recommerce platform HyperXchange. The two-year-old company sells smartphones, laptops and cameras. "We used to sell 15 devices a month when launched and now are selling 15 devices every hour," Purkayastha says.

Delhi-based Yaantra, an online marketplace for refurbished smartphones, claims that they have sold 500,000 units of refurbished smartphones in two years. "Our go-to-market strategy of tying up with financing companies is helping us grab market share," comments Jayant Jha, Co-founder of the company. "We are making products affordable without compromising on quality and with financing options, our customers can take home a feature rich smartphone by even paying Rs 500 a month."

"We have served almost 250,000 customers till now and our customer base is doubling every year," says Rohit Bagaria, Founder & CVO, Budli, a Bangalore-based recommerce start-up which mainly sells electronic gadgets. Founded in 2013, Budli has tied up with 10,000 retailers for selling refurbished products.

Evidently, the boom in the overall e-commerce industry is one of the major growth drivers for the recommerce market. "E-commerce market has a lot of returns. And recommerce industry emerged to manage those returns," says Hitendra Chaturvedi, Managing Director, GreenDust, which was started in 2009 and is one of the pioneers in this space. "In the US, e-commerce has about 20 per cent returns and in retail its about 3 to 10 per cent. "In India, the traditional retail segment has a 5 per cent return rate while in e-commerce it is close to 15 per cent," says Chaturvedi.

These returned products will come to the recommerce market. More than 90 per cent of the used products are still sold through the grey market. With more recommerce companies entering the Indian refurbished industry, the market is all set to become more organised. In the past three years, a handful of refurbished companies have started operations. This has increased market competition and companies are adding more categories to their existing list. While most of the new companies, like Togofogo and HyperXchage, mainly focus on smartphones, tablets and laptops, older companies like Greendust and Ebay have added various categories ranging from health care equipment, kitchen appliances, and so on. Apart from these, there are specialised refurbished players - Coutloot, for example, sells apparels and fashion accessories. As the refurbished goods industry clocks growth, investors are also eyeing the market. Recently, Cashify, a refurbished smartphone seller, raised $12 million Series C round from Chinese investors led by CDH Investments and Morningside Group. Chinese recommerce firm AiHuiShou is a strategic investor in Cashify. The five-year-old start-up had raised undisclosed sums in 2015 and 2017 and claims that its sales grew three-fold over the past year.

In April, Mumbai-based MJVS Fashion, which operates online fashion refurbished marketplace CoutLoot, raised $1 million (Rs 6.5 crore) as part of its ongoing pre-Series A round. The fashion recommerce company operates in 14 cities currently and claims 500,000 downloads for its app. Last year, Tokyo-based incubator and venture capital investor Digital Garage, which is an early investor in Twitter, has made an undisclosed round of investment in Bengaluru-based Elanic, an online platform that sells used and refurbished clothes.

Yaantra has raised $3.1 million (about Rs 20 crore) in its fourth round of funding from existing investors - private equity fund Carpediem Capital. With the latest round of funding, the company has so far raised $10 million. Yaantra registered a turnover of Rs 100 crore last year. GreenDust claims to be profitable since FY15. However, last year, the company stopped owning inventories and operates as a recommerce marketplace as well as a technology solutions provider. "Currently, we are handling a volume of about Rs 12 crore worth of inventories a month," says Chaturvedi. Last financial year, HyperXchange registered a turnover of Rs 9.2 crore and is expected to clock Rs 100 crore in turnover this year. 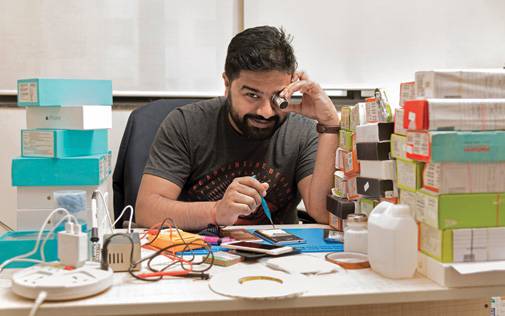 Even though investors see bang for their buck in the recommerce market, consumers have a misconception that all refurbished products are used products or damaged products, which is not true in most cases. "Many a time, it can be just the packaged box was opened. Once the manufacture seal is opened, it cannot be sold as brand new good," says Soumitra Gupta, Founder TogoFogo, a smartphone refurbishing company. "It can also be products which were kept on display, returned through e-commerce sites before the cool-off period of 30 days or products with some minor external damages during shipping." The company claims that it has sold 350,000 units of smartphones in the last three years.

Recommerce companies source goods from e-commerce companies, retailers, OEMs and also directly from customers and have various standards for pricing. The refurbishment process typically includes a full diagnostic test performed through industry standard applications, replacement of any defective or damaged parts and a thorough cleaning and data wiping process.

"Our in-house technology based on analytics is helping us to make the products market ready fast," says Purkayastha. According to Chaturvedi of GreenDust, robust technology is the backbone of recommerce business. "We use reverse logistics ERP which takes care of inspection of the inventory, grading and dynamic pricing and maps it with data analytics software to know the customer perspective. We also use machine learning. This helps us to reduce our turnaround time to less than 30 days," he says.

Bagaria of Budli says that they have a "dynamic in-built pricing algorithm" to determine product prices based on metrics such as age, wear and tear and market demand, current market price, estimated resale value and so on. The price of a refurbished item directly depends upon the grading of the product. Most of the products are sold for about 60 per cent of the retail price along with certification and warranty, claim companies. Agrees Surojit Majhi, a Kolkata-based consumer, who bought a refurbished phone recently. "My refurbished phone costs 40 per cent less than its original retail price and still it functions like a new phone."

That said, there are other challenges. Companies say the recent demonetisation drive has affected the industry significantly. Also, some players had to shut shop after failing to read the market well.

Last year, Delhi-based Surpluss exited owing to issues reportedly aggravated by demonetisation. The company, founded in 2014, sold refurbished products ranging from mobile phones and tablets to fashion apparel. Gurgaon-based Overcart, founded in 2012, also has failed and its website is inactive with a notice saying that the company only accepts bulk orders.

Unprofitable inventory is another hurdle. In the returns market, supply is what the returns are and companies dont have any choice. This will affect profitability. Says Chaturvedi of Greendust: "The companies will be able to sell almost 80 percent of fast moving inventories. But the bottom 20 per cent of the inventories will be very hard to sell and the companies face losses." As the consumer electronics market is moving fast, "if you are not able to sell an inventory in six months, you will face a loss in that product," he adds.

Pricing and market turnaround time is also key for success. Refurbished items do not have structured pricing. "

Customers do not want to pay huge a price for a refurbished phone or a laptop. They will expect almost 40 per cent discount. But you have to consider the price of parts used for refurbishing as well as your margin. Many players source products in bulk and would not be able to turn around the product at a feasible price," says Purkayastha of HyperXchange. Adds Chaturvedi: "In case of new products, your margin is set. So rather than making profit for each product, we are focusing on making profit for each portfolio."

To retain customers and grab market share, recommerce companies are experimenting and inventing new business strategies. "We buy back from our customers. If a customer wants to exchange a product, after, say six months, we are giving almost 50 to 70 per cent of the value of the phone," says Purkayastha. HyperXchange is also planning to come up with ATM kiosk with security features inbuilt, for collecting inventories in future. "Sellers can deposit their inventories here and collect money," he sums up.

"I want people coming to stay longer in India"