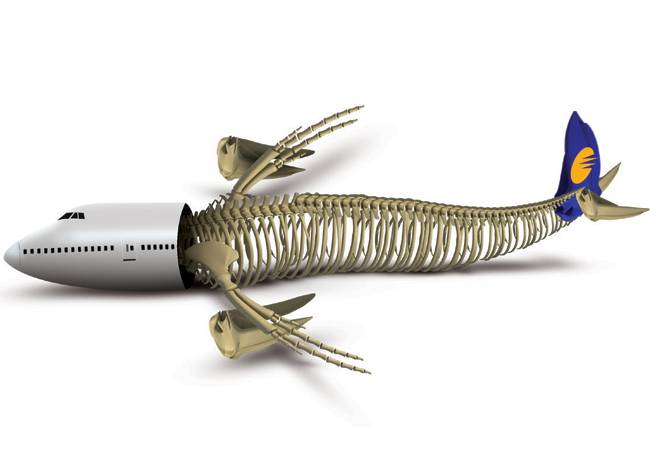 Will jet airways fly again? That's the question everyone has been asking ever since it shut operations in mid-April. The only meaningful assets that it has, airport slots (about 766), will go permanently to rivals by July-end if it is unable to find a buyer and fly again by then. And the only two entities interested in buying it - Etihad and Hinduja Group - are reported to have made it clear that they don't want to take majority stake in the airline. That leaves bankers, who are owed Rs 8,500 crore out of Jet's total liabilities of over Rs 17,000 crore, with no options.

With most of its prized assets gone, Jet, by all accounts, is in a bigger mess than Kingfisher Airlines ever was considering that the latter owed banks just Rs 6,000 crore when it went bust. A large number of Jet's grounded planes have gone back to lessors, and some of them (21 Boeing 737s) have been taken over by rivals SpiceJet and Vistara. Over 4,000 employees out of 14,000 have left the airline over the past few months, including CEO Vinay Dube, CFO Amit Agarwal and CPO Rahul Taneja. An airline typically needs 120-150 employees per aircraft. Assuming that it resurrects with 60-odd planes, as suggested by advisor McKinsey & Co, it will require 9,000 people. Though it has the required numerical strength, the exodus of key personnel, including pilots, to rival airlines will prevent a smooth take off (see How Others Are Gaining).

A revival seems wishful thinking. The lenders, particularly SBI, have been running helter-skelter to find a buyer after Etihad submitted a conditional bid last month for re-investing in the airline in exchange for a minority stake. In the last week of May, the lenders had asked for two weeks to find a domestic investor as they are reluctant to invest more - they promised Rs 1,500 crore funding in February but later backed off and decided to auction the airline. 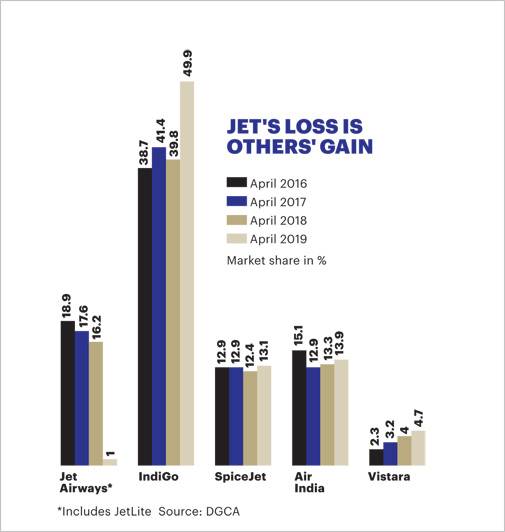 London-based Hinduja Group's interest in acquiring the airline has also not gone anywhere. There are reports that even it is not keen to take a controlling stake and has become cautious following a Dutch court's order declaring Jet bankrupt over unpaid dues to two European entities.

"It seems the bankers are finding it difficult to secure a buyer. Aviation is a cyclical business and it may not be a viable business for the buyer even if the banks offer a significant haircut. It's likely that the bankers will refer the case to the National Companies Law Tribunal, or NCLT, for insolvency," says Yogesh Kumar Gupta, a New Delhi-based insolvency professional. "Jet is beyond salvage. It has absolutely no possibility of flying again," says Devesh Agarwal, an aviation blogger.

Banking sources suggest that the ball is now in the government's court. "The new government has to take a call on what to do with Jet. The final authority rests with the government. We are expecting some response from the civil aviation ministry by mid-June," says a banker.

However, a Jet insider says the government is going to get busy with Air India stake sale, and Jet is going to be lower on its priority list. "The bankers will perhaps call it a complex deal and eventually take it to the NCLT for liquidation. That's a strong possibility," says a source. One reason the government has developed cold feet on rescuing Jet is the absence of public outcry over job losses even in the run-up to the general elections.

Lenders have estimated initial funding of Rs 5,600 crore for Jet to restart operations, though in February, when SBI had prepared the first resolution plan, it had estimated a requirement of Rs 8,500 crore. The resolution plan, which aimed to give 51 per cent equity to the lenders for Rs 1, became void after the Supreme Court quashed the Reserve Bank of India's February 12 circular mandating preparation of a resolution plan within 180 days of the first loan default.

The only evident supporters of revival are government-backed National Investment and Infrastructure Fund, or NIIF, and Etihad. The Gulf carrier has a lot to lose if Jet goes for bankruptcy. Besides its 24 per cent stake, it also has 50 per cent ownership of the Jet Privilege programme. Both NIIF and Etihad have reportedly expressed a desire to invest Rs 2,000 crore each in Jet subject to the lenders finding a majority buyer and committing an interim funding of Rs 1,500 crore.

Jet's liabilities include banks loans of Rs 8,500 crore. Even if banks take a 70-75 per cent haircut or let someone start with a clean slate, the challenges have outgrown the opportunities. "A series of issues - top management exits, bankruptcy proceedings in the Netherlands - are going to make it difficult for the new buyer to hit the ground running," says an aviation consultant. Jet sources say senior staff below CXO level has nearly halved in the past few weeks. About 15-odd senior vice presidents are still holding on hoping for a revival.

"We expect liquidation of assets as the most likely scenario. There will be open auction of Jet's assets. The proceeds from the e-auction will go to secured creditors first. Jet's assets may fetch about Rs 3,000 crore, which will go straight to banks, as they are owed about Rs 8,500 crore," says insolvency professional Gupta.

Experts say even if banks manage a successful auction and keep the proceeds, it is highly likely that trade creditors and employees (not paid salaries for months) will file lawsuits for their dues. Jet's lenders are stuck between a rock and a hard place given that they are now the airlines de-facto owners. Selling at a discounted price, and without sufficient transparency, may result in public scrutiny and litigation, and if they take the insolvency route, unpaid trade partners and disgruntled employees will go after them to recover their dues.

Banks are not going to bear the brunt alone. Jet's founder Naresh Goyal, who was earlier seen to have comfortably escaped the mess, is in a tight spot. He and his wife's recent deplaning from an Emirates' Dubai-bound flight was a pre-emptive step by the government to avoid a Nirav Modi/Vijay Mallya kind of situation. The Enforcement Directorate and the Serious Fraud Investigation Office are reportedly investigating charges of financial irregularities against Goyal.

In Jet's sorry saga, everyone is a sufferer. Within employees, the level of distress varies. Pilots and cabin crew are in a better situation as rival airlines draw up expansion plans and hire them. Traffic agents, handlers, baggage loaders, dispatchers and staff at check-in counters are likely to face problems in getting a job because of surplus workforce in these areas.

Meanwhile, the rival airlines are having a party at the cost of Jet and gaining market share in proportion of their size. Since Jet's grounding last month, Indian aviation's fleet size has come down to 569 from 638 at the start of the year. This has given other airlines a chance to increase fares and improve profitability. SpiceJet, for instance, reported an 11 per cent rise in fares in the January-to-March period. IndiGo CEO Ronojoy Dutta has gone on record that Jet's fall has helped increase unit revenue by 3-4 per cent. If Jet had not been grounded, IndiGo would have lost anywhere between Rs 650 crore and Rs 800 crore in 2018/19, an aviation veteran has estimated. IndiGo and SpiceJet are frantically adding capacity to take advantage of the opportunity. IndiGo plans to add nearly 65 aircraft over the next one year. SpiceJet, which has inducted 25 planes in the past two months, plans to induct 35 more in this financial year.

"Jets crash has sorted out overcapacity concerns for the time being. Benign crude oil prices, stable rupee exchange rate and grounding of Jet have led to some airlines taking an aggressive approach towards capacity addition. A fare war is inevitable, which will put pressure on yields," says Kinjal Shah, Vice President and Co-head, Corporate Sector Ratings at ICRA. This is likely to affect Jet's sale process as a buyer will consider these future scenarios before taking a call.

Jet, started by Goyal 26 years ago, has been facing an existential crisis for some time now. So far, its lenders have managed to stave off bankruptcy even after repeatedly failing to secure a buyer. Expecting the government to use a magic wand to solve all problems seems unfair. Its perhaps time to go for insolvency.