Four years after the regulatory crackdown, drones are set to rise from the shadows as government releases a roadmap for opening up the skies. 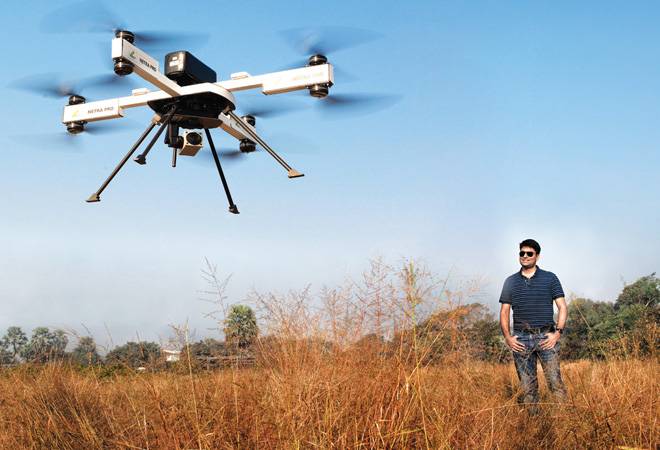 It's perhaps the largest drone manufacturer in the country but Navi Mumbai-based ideaForge was a typical start-up till not too long ago. It was founded by four friends from IIT-Bombay, who built the world's smallest and lightest autopilot - the brain inside a drone system - and the first indigenous micro unmanned aerial vehicle. The technology gave them entry into defence, particularly the Defence Research & Development Organisation, which gave them their first big order. Today, ideaForge says it supplies over 90 per cent of drones procured by the government.

ideaForge's focus on the government is not incidental. The government has been the biggest legitimate procurer of drones in India ever since a Directorate General of Civil Aviation (DGCA) notice in 2014 prohibited their use for civilian purposes, killing at birth what could have been a huge industry, helping tens of different sectors, by now. For instance, in 2014 Amazon had announced that it would make India a test bed for Prime Air Service, its drone delivery arm. The plan could not go anywhere. Mumbai-based Fransesco's Pizzeria tried to deliver a pizza on a drone but ran into police.

However, all this is set to change with the new drone regulations 1.0 - which allow operators to fly after taking clearance through a mobile app - that kicked in from December 1 last year. The easing of the rules is expected to trigger a boom in the use of drones by both enterprises (public/private) and private service providers.

Under drone regulations 1.0, the airspace has been partitioned into Red Zone (flying not permitted), Yellow Zone (controlled) and Green Zone (automatic permission). Though these are still fairly restrictive and allow only visual line-of-sight daytime and 400-feet altitude flights, apart from barring under-the-radar operations, the Ministry of Civil Aviation is already in the middle of preparing draft guidelines 2.0 which will relax such restrictions to a large extent (see How the Sector Will be Opened Up).

The policy prescribes issuance of UIN (unique identification number) and UAOP (unmanned aircraft operator permit), which are similar to number plate and driving licence, respectively. "Getting permission is going to be a paperless process. It's a futuristic policy," says Vignesh Santhanam, President, Drone Federation of India.

Even though the number of drones flown by service providers in India is as high as 40,000, in spite of the 2014 ban, these drones have been largely operating in the shadows, as though technically one could fly drones after approval, the DGCA had no intention of giving the go-ahead. "The notice allowed operations on an approval basis, but it was a de facto ban. It was a knee-jerk reaction," says Anirudh Rastogi, Founder, Ikigai Law - a law firm that specialises in technology.

The regulations say import of drones is subject to permissions from the DGCA and the Directorate General of Foreign Trade. There are no official figures but the industry estimates that nearly 90 per cent drones on the commercial side - used for mapping, surveillance and weddings - are imported, largely from Chinese manufacturer DJI. However, government agencies and enterprises have largely relied on indigenous systems due to safety concerns with Chinese equipment, much like US Army, which issued a memo last year asking its units to discontinue using DJI drones.

The flooding of the market with smuggled drones had prompted the government to ban imports a year ago. But operators continue to import illegally by circumventing the approval process as no domestic manufacturer can match the price and quality of the Chinese products. "Lack of enforcement is leading to illegal imports. Now, the overall compliance is going to be tougher, which will make it untenable for some operators to use it as widely as it is happening today. We are fully autonomous in operations but don't give as much control to users. A 10th pass jawan can use my UAV," says Ankit Mehta, Co-founder & CEO, ideaForge, which supplies to Army, Navy, Air Force, ITBP, CRPF, BSF and various state forces. "DJI has been around for a while. They have cracked the hardware side of drones. For us to get there in terms of price points will take time. DJI drones are the cheapest by a fair margin," says Santhanam of Drone Federation of India.

Indian drone manufacturing is also to a large extent dependent on foreign suppliers for everything from batteries to electronics to mechanical hardware. Bengaluru-based Asteria Aerospace, for instance, sources 40 per cent of its components from abroad. "Be it cameras, motors or radio links, we don't have the ecosystem to make these components here," says Neel Mehta, Co-founder, Asteria.

Will the new regulations encourage product development in India?

Industry experts say the policy has broken new ground with digital sky platform and NPNT (no permission, no take-off). The digital sky will enable the government to digitise the entire sky and control the drone ecosystem. In the first phase, the platform will register pilots, devices and services providers. The second phase will include automation, bi-modal control and setting up of dedicated air corridors. "Once we digitise the sky, we will be able to give people rights to use certain slices of it for some period of time," says Jayant Sinha, Minister of State for Civil Aviation (read interview on page xxx).

Under NPNT, the first-of-its-kind rule in the world, no registered drone will be able to take off without permission. The software in the drone will deactivate the machine if the operator flouts the rule. "It is a game changer," says a drone consultant.

Getting the policy out in four years was nothing short of a miracle given the kind of hindrances it faced. In 2016, the DGCA came out with draft guidelines for public consultation. The policy was stuck for two years because it was challenging to bring the different stakeholders, particularly the Ministry of Home Affairs (MHA) and the Ministry of Defence, on the same page. At one point, things between MHA and DGCA went so bad that MHA is reported to have started working on its own draft regulations though drones are, as a subject, out of its jurisdiction. "It was largely due to security concerns raised by MHA - people militarising drones or taking pictures of important establishments - and safety concerns - what if the drone crashes, causing fatalities - by DGCA. It took time to bridge the gap," says Ikigai Law's Rastogi.

Sinha, who joined the aviation ministry in July 2016, saw the deadlock, went around the country, and held public consultations in Delhi, Bengaluru and Mumbai with industry members. The policy finalised as a result of his efforts is set to redefine the Indian airspace.

The drone ecosystem is set to expand at a fast pace, say experts. To begin with, mining, agriculture, oil and gas, broadcast, telecom and aerial filming sectors will be the prominent users. After drone regulations 2.0, the usage is expected to become more widespread. For example, BVLOS (beyond visual line of sight) flights will enable offshore oil/gas pipeline surveys. Also, payload deliveries will help in smart housing, pick-ups, organ transport and delivery of goods at specified ports. "The growth will be exponential. There are a large number of use cases which have not been explored yet. The usage in industry, infrastructure, surveillance and agriculture, as well for recreational activities, will grow," says Ikigai Law's Rastogi.

The number of service providers is already rising. Rahat Kulshreshtha, Founder and CEO, Quidich, says when he won a contract from the railways to monitor progress of projects two years ago, there were two-three bidders. Today, there are close to 15 bidders for such projects.

"It's a fight between man and drone. If the cost factor works in favour of drones, there will be demand. The procurement is still government-led. Going forward, the enterprise side (PSUs, big private sector companies, railways) of the business will grow. The consumer side may not grow as fast because of rigorous import permission process and training requirements," says Mehta of ideaForge. The service providers are required to take training from DGCA-authorised schools so that they can communicate with air traffic controllers.

It is not just cost that will decide the industry's future as, in some cases, capabilities of drones are unmatched. For instance, a mine surveyor takes days to assess stockpile and find haul routes for trucks, a task that drones can do in two-three hours. "Over the next two-three years, we will see more growth in the commercial market, which will overtake the government market," says Asteria's Mehta, adding his company is on track to sell 150 drones this year, a substantial jump from just 50 drones in the past six years.

Another area where drones have a clear advantage is inspection of electricity transmission towers at Power Grid Corporation. "These towers are 60-70 metres tall. A person used to climb up to check screws, etc. Imagine the kind of analysis a person can do using the 600-odd images captured by drones for each tower covering its every nook and cranny. Proper inspection is important for insurance claims as well," says Rohan Sinha, Evangelist, Indshine, which has worked with railways, National Highways Authority of India and Power Grid Corporation.

"In one year from now, we will see the drone industry taking off in a big way. Many big investors were not able to invest as there was a question mark over the legality of the drones. Globally, the industry has evolved, and investors have figured out sources of value creation," says Quidich's Kulshreshtha. Minister Jayant Sinha says just like the telecom sector in the recent past, India can have five-ten big drone service providers with each of them having hundreds of drones. "We spoke to many venture capitalists when we were formulating the policy. They told us that because of lack of clarity on regulations they didn't think it was a sector that could be invested in. People are excited that we are establishing these world-leading regulations. India can not only develop its own market, it can become a hub for drones globally," he says.

A drone advisory firm says the number of enquiries has gone up. "Overseas companies, especially Chinese and European, want clarity on the regulations. They want to export to India. There are companies which have done installations of the digital sky platform in other countries. They also want to come in," says the consultant.

But has a haphazard DGCA ban followed by four years of slow policy formulation widened the gap between India and others? Sinha says "if you are stuck in a bureaucratic deadlock because someone says no, you have to find a way to solve the problem. Unless someone is committed to solving the problem and creating an industry, it's not going to happen. These are difficult problems."

"Without restrictions, drone manufacturing, service providers, pilots, training companies and industrial applications would have grown substantially. There are hundreds of business cases the industry couldn't tap into," says a consultant.

However, being late doesn't mean India has missed the bus. The drone technology has been changing fast. The silver lining for local operators is that they are not stuck with legacy technologies, and with a futuristic policy, India might just be able to close the gap with the rest of the world.