Getting access and then converting it to inclusion and adoption through appropriate products is the target.
Team BT | Print Edition: December 16, 2018 As fintech players start expanding their presence across the country, the big issue relates to inclusion. All along major banks had focused largely on urban India. As smaller fintech players including payment banks, small finance banks and non-bank financial companies expand their presence deeper into the country, they are making a difference to Bharat.

Business Today organised a roundtable discussion in collaboration with global audit and consulting firm PwC. The theme of the discussion was 'Fintech for Inclusion - How Players Adapt Their Playbooks for Rural Markets; Challenges and Opportunities'.

Prosenjit Datta: What do you all see as the opportunities and challenges for inclusion under fintech?

Rishi Gupta: Over the last 12 years, the world has evolved thanks to technology, regulation and government intervention. There is a big opportunity, provided we see it. Everybody is so focused on urban India that they are ignoring Bharat. We have personally seen that inclusion on accounts is no longer required. There are already about 1.8 billion accounts in the system, which means on an average 2-3 accounts per person. The opportunity is in building accessibility and access. So we are focusing on it, opening up more points, rather than just opening accounts. R. Baskar Babu: I agree with Rishi on access and accessibility, but the difference that it has to cover Bharat or India is not truly relevant because they are interlinked. For a remittance to go from Mumbai to Orissa, the accessibility has to be at both the ends. Even in a place like Mumbai, probably 40 per cent don't have meaningful access to banking.

Harjeet Toor: We adopted financial inclusion early and treat it as a business. With technology, cost has come down. That enables us to go beyond simplistic products. The challenge is that there is still a large behavioral change (needed) in the rural space. Everybody has accounts, I agree. (But) I don't think people use accounts. One is access; second is literacy. I guess as payment banks penetrate deeper, you will have more outlets within the village and people won't need to travel to a branch.

Mohan Jayaram: We are sitting on a tremendous opportunity. If we take a step back and see, there are 1.3 billion people of whom about 275 million have been given a loan at some time. The next 300 million is the opportunity. We are a data-rich but financial inclusion-light country. We have a billion people who have telecom data, and payments data in some form. Is there a way we can use that information to figure out who to give credit to? Yes, we can. If we put together tech, the data and consumer insights against the opportunity of the next 300 million, we are sitting on a fair bit of opportunity.

Abhishek Kothari: I probably represent the newest kids on the block here in terms of trying to create a lending enterprise. Technology and data are still used as an evolutionary mechanism in industry. It's not creating a revolutionary aspect. Can we create something where we don't need a phone to have a loan application? Can we create a social scoring system for everybody based on the data and give them a loan? If you look at it, we are only scratching the surface in terms of data that's machine readable and usable for credit assessment. One of the biggest problems I see as a data scientist is that data is in silos. 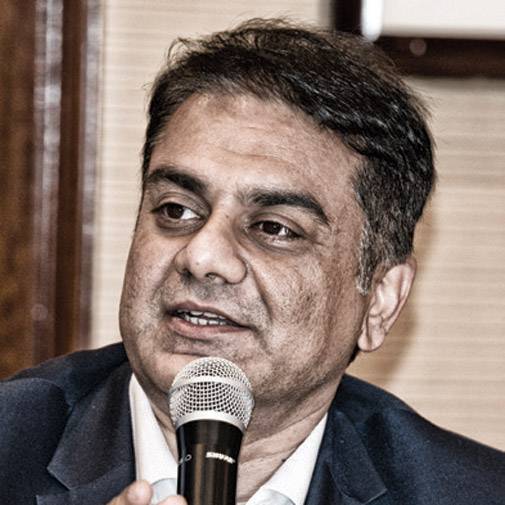 J.P. Singh: Today everybody is on WhatsApp, and most of India is on Facebook in one form or the other. That data can be used for financial inclusion, and financial underwriting. Then market crowding has to stop. Instead, we have to segment the market based on capabilities.

Vivek Belgavi: My observation is that availability doesn't lead to adoption. My favourite example is of MDR (Merchant Discount Rate). The payment acquiring was always betting on reducing MDR, and it became zero. But it made no blip in transactions. We co-founded an investment advisory start-up and thought why don't we offer it to all folks within PwC. It was all nice and very millennial-ish. But there was no adoption because everyone is ingrained in the current steps and processes. To shake them out will require a lot of money and we don't have access to that kind of risk capital to really make those changes happen. If I am Google, I might give you scratch cards and try to drive change. Maybe all global VCs are doing more for inclusion than many of us. We are really pumping money to get that change happen.

Gupta: Amazon, WhatsApp, Google... are payment companies rather than about financial inclusion per se. Financial inclusion really means that the person who uses cash, becomes digital. We continue to see that post- demonetisation cash went down but I believe some Rs 20 lakh crore cash is back in the system again.

We are moving from no digital to assisted digital. That assisted digital will move to self-service digital in the next few years. But cash is going to be there. When demonetisation happened, people already in digital actually started to do more transactions. But now if you have 100 transactions at merchant level, it has now come down to 10 transactions. While there are 300 million smartphones, only 15 million people are active users.

Belgavi: For an app that we are developing for a client, we wanted to do a test. About 50-70 per cent of the 300 million smart phones are below Rs 5,000. These phones do not run more than 2-3 apps at any point. Your app will perhaps come after a WhatsApp, YouTube or a video or music app.

Babu: We will have to go through the assisted digital mode. Mobile (smartphone) penetration among low-income household women is just 8 per cent, 26 per cent for men. It is like credit card penetration. I have six cards, but the average would be less than one.

Jayaraman: In a month we set up about 34 million-odd small micro credits that we give on the basis of prepaid data. What we realised is that when you look at the models that we get out of there and those are largely based completely on data, there is never been someone who has actually lent to these people in the past so it's all new to the credit and so on.

Datta: Any last thoughts or points?

Gupta: I think the government has started to put money into the bank accounts directly rather than giving through the entire panchayat ecosystem. Somewhere the government is thinking of moving the food subsidy in a monetised manner. This government has already seen the benefits of digitisation through the Aadhaar platform and that's why the reason the Supreme Court allowed DBT to continue on the Aadhaar platform. They saved some Rs 70,000-80,000 crore. It also means that at least we'll get some data. You can build up some algorithms on that.

Gupta: I think food is what they want because for every one-rupee subsidy they give, they spend three rupees in FCI. So they will save Rs 2 for giving the subsidy, but on the Rs 1 also they will save money that can be distributed better. Bigger subsidies like MNREGA have moved in. Now maybe food, power. Belgavi: My last thought on this would be literacy. You hear about frauds in cities, with educated people. It is of people sharing OTPs. Imagine that at a Bharat level. Other concerns are gender, caste or income driven imbalance. These are the realities on the ground.

Datta: I've seen as anecdotal evidence that poor women might have bank accounts but they don't have control over it. The money might go in but somebody else actually withdraws it. Any solutions to that?

Gupta: My experience is that saving is done by women only. However, she feels more comfortable giving control over those savings to the husband or son because she is not that literate. So if we're able to find a solution, doorstep saving can be promoted, which is quite an expensive proposition.

Toor: You will have some man from a village who goes once to the ATM with all debit cards and withdraws. That's very common in some rural areas.

One of the places where we found a solution was if you could do the biometric micro-ATM withdrawals. Hopefully with payment banks coming in, we will have more outlets within villages. At present, it's not the son or husband who goes and withdraws, it could be anybody.

Singh: I have seen cases where the lambardar or somebody has control over 100 or 200 people's accounts. He comes to the bank and says give me the cheque book, give me everything, I will operate this account. So, as Harjeet is saying, perhaps biometric is the solution for this.