V Vaidyanathan, the new boss of the merged entity, has had a good run but now faces challenges and high expectations. 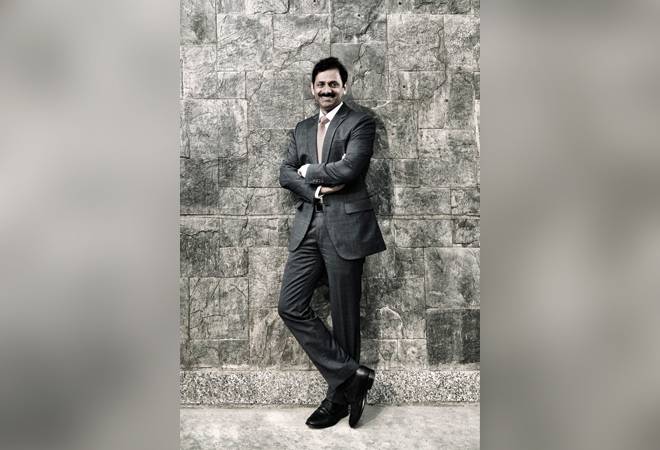 Sandy Weill, the former Chairman of Citigroup, now in his mid-80s, had an exceptional five-decade-long career during which he rose from being a professional to an entrepreneur to head the largest bank in the world. Weill sold his securities business to American Express for a billion dollars in the 1980s and also became the president of the merged entity. After leaving American Express mid-way, he founded a small finance company, and went on to acquire some big Wall Street names like Primerica, Travelers and Salomon. But his biggest kill was merging his entire business with Citicorp. After close to a decade at Citigroup, Weill hung up his boots as Chairman in 2006.

The latest merger of a non-bank finance company Capital First and IDFC Bank draws similarities with Weill. V. Vaidyanathan, 50, who coincidently worked with Citigroup in India as part of the consumer banking division, has got a bank by way of a merger and also the CEO's job to run the merged entity. After working with big brands like Citi India and ICICI Bank, Vaidyanathan first joined hands with retail king Kishore Biyani for a 10 per cent-plus stake to turnaround the struggling Future Capital Holdings in 2010.

Two years later, when Biyani wanted to exit, Vaidyanathan got the US-based private equity investor, Warburg Pincus, to do what was then India's largest management buyout of a listed finance company. In less than a decade, Vaidyanthan, along with Warburg as majority partner, scaled up Capital First (renamed from Future Capital) from market capitalisation of less than Rs 1,000 crore to Rs 8,000 crore. It's not easy to get a banking licence, but with the merger with IDFC Bank, Vaidyanathan now has that.

"When I first left ICICI Bank, I had a very simple idea - to take a stake in an NBFC, build an SME and consumer financing business and convert it to a bank," says Vaidyanathan, the new MD and CEO of IDFC First Bank, the seventh largest private sector bank in terms of total assets.

IDFC Bank's former MD and CEO, Rajiv Lall now assumes the role of Chairman, retaining his stock options. "He (Vaidyanathan) is my wealth manager," said Lall in an interview.

Expectations are high. IDFC Ltd has had a challenging journey. Set up as an infrastructure financing institution in late 90s, it saw the acrimonious exit of its senior management team led by its then MD and CEO Nasser Munjee in 2004. Lall then ran it for almost 13 years before the merger with Capital First. The company struggled because of the headwinds that the infrastructure sector was facing, before it was converted to a bank three years ago. But even then, scaling up retail banking operations was tough in terms of both retail assets and liabilities (deposits). So, unlike other private banks whose retail engine compensated for the loss of growth in corporate advances, IDFC Bank was mired in legacy issues and provisioning for stressed assets. There was a desperate attempt to initiate a merger with the Shriram Group but valuation differences tripped the move. It was then that Vaidyanathan's Capital First came into the picture. 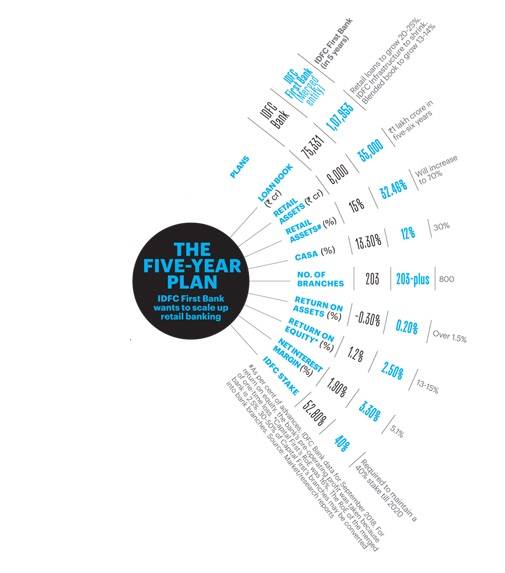 IDFC Bank and Capital First shared a Warburg link - before joining IDFC Ltd, the 61-year-old Lall had worked for Warburg Pincus as a partner in New York, and the PE firm initially had 61 per cent stake in Capital First.

After the merger, the bank's retail book expanded from 15 per cent to 32.46 per cent. The bank got a tested business model of financing small entrepreneurs and middle class customers. But the biggest catch was Vaidyanathan, say many outsiders. At ICICI Bank, Vaidyanathan, along with K.V. Kamath and Chanda Kochhar, had played a key role in scaling up the retail portfolio from Rs 200 crore to Rs 1,35,000 crore. At Capital First, too, the assets book swelled from Rs 91 crore to Rs 30,000 crore in eight years.

Warburg in India is active in the financial services space and has made handsome profits. It currently has a stake in AU Small Finance Bank, and still holds around 10 per cent in the new entity IDFC First Bank. With Vaidyanathan's and Warburg's presence in IDFC First Bank, the stock market is betting on a similar story to play out. The bank's stock has already risen from Rs 35 to Rs 45 since Vaidyanathan took over in January. "India has space for building yet another institution entirely dedicated to financing small entrepreneurs and consumers," says Vaidyanathan.

In his current five-year tenure at the bank, Vaidyanathan's big focus would be to aggressively change the business mix from wholesale to retail banking, build a low-cost current account-savings account (CASA) franchise, cross-sell products and improve profit margins. This is a strategy that all commercial banks follow because retail brings in diversification and relationships and is far more stable in asset quality. Among private banks, ICICI Bank has the highest proportion of retail assets at 57.3 per cent of its advances. The new generation Kotak Mahindra Bank has built a retail book of 42.2 per cent of advances.

Vaidyanathan's plans are expected to roll out in a year. At Capital First, he had exited many businesses such as broking, real estate, foreign exchange and investment management. At the bank, he is likely to wind down the infrastructure book, and the non-infra corporate book will also undergo a big change.

IDFC First Bank's pre-merger retail assets book was at a paltry 15 per cent, but a large portfolio of micro loans came from the acquisition of Tamil Nadu-based micro lender Grama Vidiyal in 2016. Vaidyanathan's positioning for the bank would be a bank for the common man and the new aspiring India. The retail strategy would be to focus on the underserved segments, especially micro entrepreneurs and the emerging middle class. Capital First's product bouquet of affordable housing, loan against property and personal loans will also help, especially as there will be an opportunity to cross sell.

A more immediate challenge, however, would be to build CASA deposits. The bank's CASA ratio is 13.3 per cent, among the lowest in the banking industry. Kotak Mahindra Bank boasts the highest CASA of 50.2 per cent. The higher the CASA, the better is a bank's ability to play a price game in highly competitive retail loans and also earn better margins. Currently, the big boys of banking like ICICI Bank, HDFC Bank and SBI have CASAs of higher than 45 per cent. Mid- sized IndusInd Bank, which is double the size in terms of balance sheet, has a branch network that's seven times and CASA that's three times that of IDFC First Bank.

Vaidyanathan's immediate target is to boost CASA to a respectable 30 per cent in the next five years. Not easy to do, especially as the new payments and small finance banks are already wooing customers by offering high savings rates of over 6-7 per cent. Days after joining the bank, Vaidyanathan has raised its savings bank rates for all maturities.

"In the prevailing scenario, even the best of banking franchises are finding it difficult to improve their SA (savings account) market shares; and CASA growth has been in the range of 11-14 per cent year on year," says Rakesh Kumar, Senior Vice President at Elara Capital. Kumar expects IDFC First Bank's CASA journey to reach the industry average level of 41 per cent in 7-10 years.

IDFC Bank was among the lucky two (the other is Kolkata-based Bandhan Bank) to get a banking licence a few years ago. These two were the latest to get a banking licence after licences were issued to Kotak Mahindra Bank and Yes Bank more than a decade ago. Kotak's retail assets are 42.2 per cent of advances while its CASA is 50.2 per cent. Yes Bank has retail assets of 14.3 per cent and CASA of 33.8 per cent.

Vaidyanathan's eyes are firmly set on the Rs 50 lakh crore CASA market. There is also an opportunity to target customers of public sector banks by offering them better rates and services.

There are already plans to scale up the branch network from the existing 203 to about 800 in the next five years. But that will cost a lot, putting pressure on profitability. "The branches take about 36 months to break even. If branches are consuming opex, how will the bank be profitable?" says an expert. This is a question that Vaidyanathan will have to find an answer to. What works in his favour is that both IDFC Bank and Capital First had healthy capitalisation, so the new bank will not need to raise additional capital for the next three years, according to a report that domestic brokerage firm Motilal Oswal published after the merger. In a research report, Edelweiss states that while there could be near-term challenges of deposit ramp-up and priority sector requirements, over the medium to longer term, the merger will be value accretive and synergistic.

IDFC First Bank also has a legacy book. Vaidyanthan had seen how ICICI managed its legacy book when the development finance institution was reverse merged with ICICI Bank. In the last few years, IDFC Bank had faced higher provisioning and asset quality issues because of the central bank's asset quality review. The infrastructure book, which is at present one-third of total advances, will go down to nil in the next five years. Apart from that, IDFC First Bank has already made all the provisioning needed for stressed assets. It also has corporate business comprising emerging large companies, MNCs, etc.

Over the next 5-6 years, the combined entity is likely to undergo a transformation from being a wholesale focused bank to being a retail bank. There is every possibility that profits will drag in the initial years, but once the bank gets a meaningful CASA, margins and profitability will improve. If one goes by Sandy Weill's strategy of multiple mergers and acquisitions, there is a lot to expect from marathon runner Vaidyanathan.

'All Our Products Will Be Made In India'