Billionaire Mukesh Ambani's Reliance Industries (RIL) has been on a spending spree over the last five years. It built telecom giant Reliance Jio and expanded the petrochemicals business by constructing the world's largest refinery off-gas cracker (ROGC), its downstream units and a paraxylene (PX) plant. Besides these, RIL also invested heavily in Reliance Retail, which has grown to become the country's largest retailer by revenue and profitability - it posted a revenue of Rs 1.3 lakh crore in the last financial year and a profit before interest and tax (PBIT) of Rs 5,546 crore.

On August 11, RIL Chairman Mukesh Ambani told shareholders at the annual general meeting (AGM) that the company has invested Rs 5.4 lakh crore in the last five years. Of this, nearly Rs 3.5 lakh crore went into building Jio and its digital infrastructure with the country's largest optical fibre footprint. Another Rs 1 lakh crore was invested for petrochemical expansion. Ambani says that the investment cycle for telecom is complete and is adding over 10 million new customers every month. Jio added 300 million customers in just two-and-a-half years of operations. Similarly, the petrochemical expansion completed in 2017/18 and resulted in 86 per cent jump in the segmental revenue to Rs 1.72 lakh crore in two financial years and 148 per cent rise in PBIT to Rs 32,173 crore.

But the massive investment has meant that the company's gross debt has risen dramatically in the last decade: it shot up by 438 per cent to Rs 2.88 lakh crore at the end of March 2019. After deducting the Rs 1.33 lakh crore cash in hand, net debt stood at Rs 1.54 lakh crore.

The debt is now at an inflection point - gross debt is 3.3 times earnings before interest, tax, depreciation and amortisation (EBITDA). It needs to be slashed to make the company financially fit for it to resist the eventualities of market slowdowns. With this in mind, Ambani presented a debt reduction plan at the AGM, saying he wants to make RIL "a zero net debt company" by March 2021.

To reduce debt, Ambani took the unusual step of diluting ownership in the businesses, in favour of foreign players. It is selling stake in the oil and petrochemicals business to Saudi Aramco; in the tower infrastructure business to an affiliate of Brookfield Asset Management; and in fuel retailing business to BP Plc. The company had earlier sold 30 per cent stake in its oil and gas exploration and production (E&P) business to the British giant BP for $7.2 billion in 2011. In March, Brookfield had announced the acquisition RIL's another asset - the loss-making East West Pipeline (EWPL), earlier known as Reliance Gas Transportation Infrastructure - for an enterprise valuation of Rs 13,000 crore.

Why is Ambani going in for stake dilution? The reason can be found in largely weak economic conditions and slowing domestic demand.

RIL's refining margins have been shrinking for the last seven quarters. The telecom business may have made a profit of Rs 2,964 crore in the last financial year, but earnings are not enough to repay debts and earn returns on the equity investments at least in the next 10 years. 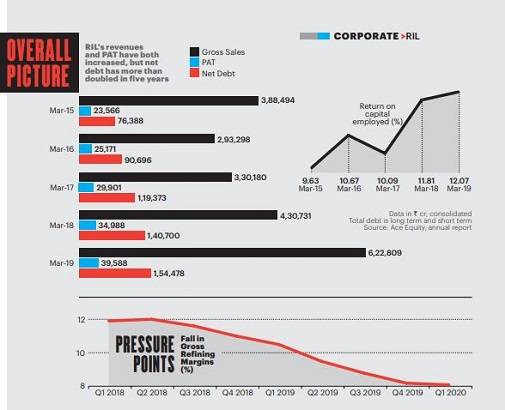 Moreover, cut throat-discounting in the retail business is still a stumbling block for Reliance Retail in increasing its margins. The turnaround of businesses like hydrocarbon E&P and media (the company owns Network 18 assets) are not yet clear.

The biggest reason behind RIL's struggle is its shrinking refining margins, primarily due to volatile crude prices and demand fluctuations caused by trade wars and economic slowdown in various geographies. A weak rupee has also played spoilsport in RIL's case. Falling gross refining margins (GRM) resulted in a 21 per cent fall in the segment PBIT to Rs 19,868 crore in the last two financial years. 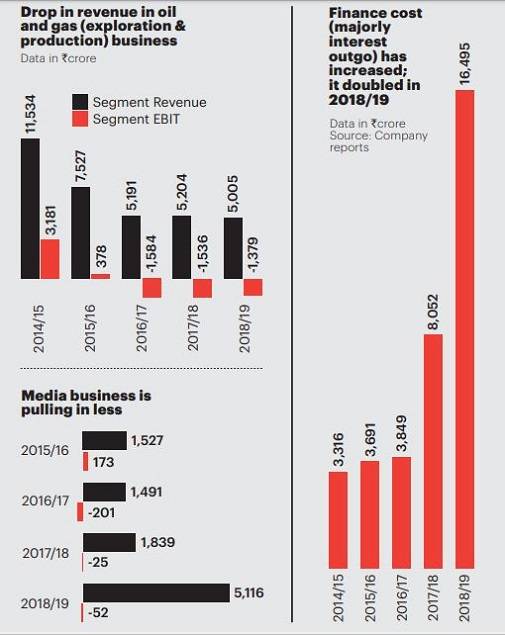 RIL's petrochemicals business, which surpassed the PBIT of its refining segment in the last financial year, has also been affected by subdued demand and lower price realisation in the first quarter of this financial year - the segment PBIT fell 4.4 per cent while revenue went down by 6.6 per cent.

The E&P business has also been making losses for the last three financial years. RIL roped in BP in 2011 to revive the business, but the step failed to bear fruit. At the AGM, Ambani said that both the partners will invest Rs 35,000 crore to bring to production three sets of natural gas fields in the Krishna Godavari (KG) basin block. He is optimistic about starting production from a set of blocks next year.

The second deal is to sell 20 per cent stake in RIL's oil and petrochemicals business - which has two refineries and a petchem complex in Jamnagar, Gujarat - to Saudi Aramco for Rs 1.1 lakh crore. Earlier, Ambani had tried the same foreign partner model in Reliance Petroleum, which had the new export oriented refinery that was built in 2008/09. The American giant Chevron took 5 per cent stake in the subsidiary, but exited soon after. Aramco has evinced interest in holding stake in the $44 billion refinery project of state-run companies in Ratnagiri, Maharashtra.

A couple of weeks back, RIL had agreed to sell 49 per cent stake in its fuel retailing business to BP for Rs 7,000 crore. The deal with Aramco will reduce RIL's controlling stake in this business to 40 per cent from 51 per cent, as the Saudi company will hold 10 per cent stake in the joint venture, which plans to set up 5,500 retail outlets across India. Aramco has also agreed to supply 500,000 barrels of crude oil every day to RIL's Jamnagar refinery (28 per cent of their requirement) on a long-term basis.

After the Aramco and BP deals, RIL's net debt is expected to come down to Rs 37,000 crore. Ambani further announced that RIL has received strong interest from strategic and financial investors for its consumer businesses Jio and Reliance Retail. "We will induct leading global partners in these businesses in the next few quarters," he said. The plan is to list them within five years. If stake in these businesses is indeed sold, it will be another round of ownership dilution in the group businesses.

Ambani is also scouting for buyers for some of RIL's real estate assets (might include land that RIL bought for building special economic zones in Mumbai), and some financial investments. He mentioned that RIL is "de-emphasising" its shale gas business in the US and would only focus on India. This means he may consider selling off the shale gas business and exiting from the production business in the US.

Experts say Ambani has an uncanny sense about the future of businesses. The investment made to build a digital ecosystem was one of the right steps as India lacked infrastructure in this space. He also patiently waited for the right business environment before scaling up Reliance Retail. Ambani's steps to reduce debt may well be another such move.