The podcast industry is booming with locally created content encompassing fiction, comedy and information of every kind

Like most Mumbai office-goers, Raunak Onkar, Research Head at PPFAS Mutual Fund, has to commute hours every weekday to and from work. Through the long roads and endless traffic jams, it is podcasts that keep him good company. "I don't want to read while travelling to avoid straining my eyes, so audio content works best for me," he says. He downloads content on his phone beforehand, as it does not take up much storage space - unlike movies - thus making listening a seamless experience as he shuffles between train, bus and auto.

The podcasting industry in India has found a sweet spot - people listen to them on long commutes, while getting ready, on morning walks and more. Podcasts bring them their daily dose of laughter, fiction or news - the latest in science, technology, economics or public policy. "The advantage of podcasts is that they don't steal your time," says Gautam Raj Anand, Founder of Delhi-based podcasts and content aggregator platform Hubhopper. He maintains that he listens to 8-10 hours of non-music content everyday, even using podcasts to fall asleep.

Podcasting is a $402-million industry in the US, the biggest global market for podcasts. Though India is well behind, its nascent market is growing fast, monthly listeners rising to 40 million at the end of 2018 from 25.4 million at the end of 2017, a 57.6 per cent increase, according to PwC's Global Entertainment & Media Outlook. "The number of listeners is growing by the day," says Ambi Parameswaran, Founder of brand advisory firm Brand-building.com, who also has a podcast show - Sponge: Leadership Lessons. "Listeners are spread across age groups and regions and are listening to a wide breadth of content." PwC estimates maintain listenership is set to increase at a compound annual growth rate of 34.5 per cent to 176 million by 2023. 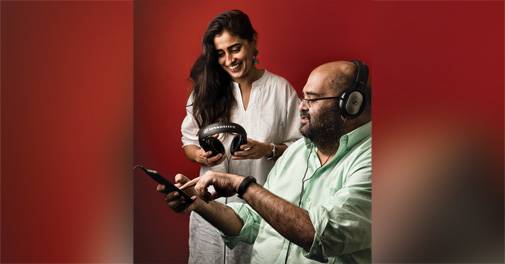 International podcast platforms such as UK-based audioBoom, Chinese audio network Ximalaya and American audio streaming service TuneIn, among others, are also targeting India. While 10 years ago, there were no Indian podcast platforms, there is now challenge from the likes of Audiomatic, Indus Vox Media (IVM) Podcasts, Indicast and Hubhopper.

Podcasters have also been helped by radio's failure to provide much variety. In India, most FM channels play Bollywood songs all day. A major reason is that news and current affairs programmes are still not allowed on private radio channels. The licensing cost of setting up a radio station - around Rs 150 crore - is another deterrent, constraining innovation.

IVM Podcasts, started in 2014, has aired 3,900 episodes so far across a wide spectrum of genres. Its most popular show is the comedy podcast Cyrus Says hosted by renowned comic Cyrus Broacha; others much listened to include The Seen and the Unseen on public policy, Advertising Is Dead on marketing, The Habit Coach on self-help and Paisa-Vaisa on personal finance. "There is room for growth in all genres as the space is evolving," says Amit Doshi, Founder of IVM Podcasts.

While the podcast audience is primarily young people living in metros, it has also begun moving beyond them. Hindi podcast platform aawaz.com found that while the bulk of its listeners (52 per cent) were in the 25-34 years age group, 26 per cent were above the age of 34. (The remaining were in the 18-24 age group.) Parameswaram of Brand-building.com says he has listeners even in their 40s and 50s. When IVM began, 80 per cent of its listeners belonged to Mumbai, Delhi, Bangalore and Hyderabad. It's down to 50 per cent. "We have listeners in Ranchi, Kanpur, Lucknow, and even in the smaller industrial towns of Uttar Pradesh," says Doshi. aawaz.com says its top five markets are Mumbai, Delhi, Lucknow, Indore and Patna, but that an equal number of listeners are from metros and non-metros.

Monetising podcasts calls for innovation and platforms have been exploring different business models to achieve this. One of to create branded content for OTT players. IVM has made an informative series on mutual fund investment MF101 for Bloomberg Quint and Aditya Birla Mutual Funds, and a Poker podcast Mera Kaam Poker for online poker site Spartan Poker. OTT platforms are also partnering with podcast platforms to create exclusive content - IVM has worked with Audible, Spotify, Gaana "Book My Show: Jukebox"and JioSaavn.

Revenues also come from ads in between podcasts. Since podcasts call for "passive listening", analytics show they are more likely to be heard to the end than videos, which need "active watching", and are likely to be pursued to their conclusion. Cold coffee outlet Sleepy Owl, online mattress sellers Wink and Nod and skincare products company Mamaearth are among those which have advertised on Hubhopper. The podcast platforms, investing most of their earnings in creating more content, are yet to achieve profitability. Advertising revenue totalled $7.2 million in 2018, up from $0.5 million in 2014. But PwC estimates that as audience grows, advertising revenue is set to rise at a 58.9 per cent CAGR to reach $72.9 million in 2023. "For digital videos, advertisers pay per view. Similarly, for podcasts, rates are decided per stream. Advertising on podcasts starts from minimum Rs 4 per stream. It is at par with YouTube advertising but the more mass you go, the cheaper it becomes. But you can't have a lot of ads lest it kill the flow of listening," says Sreeraman Thiagarajan, Co-founder of aawaz.com.

Does that translate into suitable income? Not yet. "No one is quitting their jobs to become a podcaster but experts from different areas are using it as a platform to share knowledge and information. It is not necessarily done as a career but is seen as an interesting new medium," says Gauri Devidayal, Director, Food Matters India, and hosts of podcast The Colaba Cartel.

Independent content creators depend upon integrated ads. "The cost varies on the basis of listenership. It will most likely be upwards of Rs 30,000 per month," says Thiagarajan.

With smartphones increasingly used in small towns and data packs getting cheaper, listeners will increase. Doshi expects his regional base to rise to 75 per cent in coming years. Increasingly, podcasters are looking at non-English content. While aawaz.com is exclusively in Hindi, IVM offers Hindi, Kannada, Tamil and Marathi podcasts and will soon include Gujarati, too.

But there is a difference in the kind of content Indian language audiences prefer. "Long-form podcasts work in English, but the vernacular calls for byte-sized content," says Thiagarajan. "The top genres are humour, fiction, poetry, devotional and spiritual discourses. Users love listening to Premchand's stories or recitations from the Bhagavad Gita." Bareilly-based Lav Tomar, a theatre artist, says he likes listening to podcasts than on social media. He enjoys listening to stories from Manto and Hatim Tai, apart from poetry and Dharma podcasts. "I am fixated on podcasts for stories because it brings back childhood memories of grandparents narrating them to me." New, interesting content is a constant need for the podcast platforms. Hubhopper is thus trying to develop an ecosystem of independent content creators from small towns. It has launched an online platform Hubhopper Studio that enables creators to distribute their products and even earn revenue from them. It holds workshops on the art of podcasting, teaching enthusiasts hoping to turn podcasters about how to use devices and editing software effectively, as well as to market their podcasts. "We bring podcasters together, so they feel part of a movement and support and learn from each other," says Anand.

But lack of standardisation in audio analytics is a challenge as content creators then don't get an idea of how specific podcasts are being received across distribution platforms. This restricts their ability to get more advertising.