Those who walked into Infosys founder Narayana Murthy's room at the Bengaluru headquarters, could catch a glimpse of him listening to Western classical music, particularly Mozart, Bach, Beethoven and Tchaikovsky

Those who walked into Infosys founder Narayana Murthy's room at the Bengaluru headquarters, could catch a glimpse of him listening to Western classical music, particularly Mozart, Bach, Beethoven and Tchaikovsky. Mozart is his favourite. "Almost every piece of Mozart to me is extremely easy to like and appreciate," he says. "The Divertimento (a variety of instrumental works for solo or chamber ensemble), minuets (a slow, ballroom dance work)? these are the short pieces that are very attractive."

Murthy's father introduced him to Western classical music. Murthy learnt an important lesson that is the fulcrum of building great corporations. "My father used to make us sit on the floor and listen to Western classical music," Murthy recollects. "For my father, it was a good example of how a set of 50-100 musicians, each of who is a maestro in her or his own field, could come together and work as a cohesive team under the direction of the conductor. Together, they produced something divine. He used to say this is the best example of teamwork," says Murthy. This teamwork, Murthy later realised, was mostly missing in Indian classical music where musicians playfully compete with each other. "Indian classical music is not teamwork oriented - in a jugalbandi, you have to prove you are smarter. Every player of some instrument has to get an opportunity to show how good she or he is - at least in South Indian classical music that is the case. Whereas, in western symphonies, all play together as a team," Murthy explains. Goutam Das Basketball has always been a stress buster for Gerd Hoefner, Director and President, Siemens Healthcare. Hoefner served as a coach-manager for his basketball team and played at the semi-professional level for 25 years as a player-coach. While he had to cut short his basketball journey due to a knee injury, he now nurtures his love for the game by playing with his daughters. Hoefner started playing in 1972 during his schooling days at Lohr, Germany. "Our local sports club Turn-und Sportverein von (TSV), which was active in soccer and other sports, formed a basketball team. We soon began competing at different leagues in Bavaria and gained fame by winning championships," he says. Hoefner opted for business but continued to serve as coach-manager at his basketball club.

Hoefner believes everyone needs to pursue team sports in formative years as a lot of cognitive work happens in teams. It also teaches one to be a team player. "Basketball taught me the significance of getting along with everyone, because in the end, you have to be friends if you want to be a successful team," he says. "You move together and turn difficult (business) situations into opportunities," he says.

Hoefner says that sports prepares people for shorter feedback cycles and to keep improving. Like a game plan in basketball, businesses too must continuously evolve, he says. "In the end, what matters are the results," says Hoefner. PB Jayakumar

One Quarter at a Time 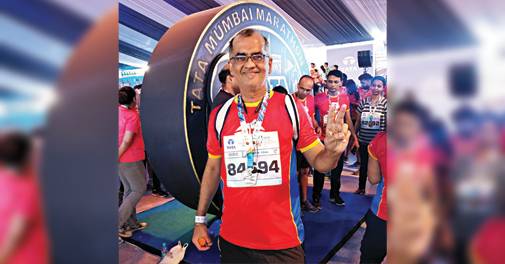 The ever-growing bucket list - that's the story of everyone's life. Vikaas Sachdeva, CEO, Emkay Investment Managers, found a way out. "I dedicate each quarter to accomplish a thing. It could be learning skills such as playing guitar, lawn tennis, table tennis or tasks such as getting investments and taxes right or finishing books on my shelf," he says. For two quarters in a row, he resolved to complete as many National Institute of Securities Markets courses as possible. "I wrote at least 10 exams and was the oldest person in the exam hall." Now Sachdeva is running marathons. "Three days a week are for running, another three for weight-lifting and one day for yoga," he says.

His bucket list has one permanent fixture. Sachdeva loves watching sports live. "I dont get much time with my son. We have watched the French Open at Paris. In 2018, we went for the Jakarta Asian Games. We plan to attend the Tokyo Olympics this year," he says. "I also want to expand my expertise on acupressure." Aprajita Sharma Amit Burman, 50, Chairman of Dabur India, has always been serious about fitness - something he learnt from his father, late G.C. Burman. "My father was also a fitness conscious person. I have grown up seeing him go about his fitness routine without fail." So, it's no surprise that Burman shows the same discipline. "It runs in the family. So I started early but this really became part of me from around the time I was 20. That was during my college years spent studying abroad." It has been years since then but Burman's focus remains steady. Every evening, he hits the gym between 5.30 pm and 6.30 pm. "Exercising has always been a part of me."

However, the time he gets to spend at the gym has gradually reduced from around 90 minutes to about an hour, he says. "Earlier, I would do cardio for half an hour and weights for about an hour but now I hardly have time left for cardio, which I intend to correct."

An early riser, Burman is up by around 6.30 am every day and reaches office by about 8 am. It is a habit that has helped him beat the peak hour gridlock en route to Gurgaon.

Burman finds time for working out even if he is travelling. He feels that working out should be part of every business leader's life because that is the time one can switch off from the world, focus on oneself, and reflect on things - personal and professional. "It rids your body of negative thoughts and toxins, rejuvenates you and leaves you with a positive attitude."

So, what is his personal fitness goal? "I did a half marathon five to six years ago. In the next three to four months, I want to start my regime and repeat that." - E. Kumar Sharma All CEOs try to stick to a strict diet regime. Some succeed while most fail to maintain it in the longer term. Then, there is Jack Dorsey, CEO, Twitter, and CEO and Chairman of Square, a payment processing product.

The 43-year-old has adopted an intermittent fasting schedule - he eats during a window of six to eight hours and fasts for the rest of the day. Dorsey eats only dinner. His meal is reported to have fish, chicken or steak and a lot of greens. That's followed by mixed berries for dessert. Dorsey claims the strict regime helps him "stay sharper".

As if maintaining that diet regime was not enough, Dorsey walks the five miles to work three times a week. On the other two days, he works out of home.

Dorsey aims to meditate for two hours a day - one hour each in the morning and evening. He follows the meditative ritual of Vipassana. Recently, he finished his third Vipassana 10-day schedule in Worcester, South Africa. He tweeted: "Continues to be the toughest and best thing I do for myself." Africa had a big impact on him and he said he plans to spend at least three months there in 2020.

Vipassana entails long periods of silence as well as sitting on meditation for hours. The retreats are not only mentally challenging but physically daunting as well. During the 10 days there are no devices, reading, writing, physical exercise, music, intoxicants, meat, talking, or even eye contact with others. S.N. Goenka, whose establishment Dorsey visited, was one of the most popular proponents of Vipassana. Anup Jayaram