Drug regulatory reforms in China have turned the heat on the Indian pharmaceutical industry and raised the cost of bulk drugs. But some firms have managed to turn the crisis into an opportunity by filling in the space left by the Chinese.

Ludhiana-based IOL Chemical, the largest maker of ibuprofen active pharmaceutical ingredient (API) in the world with annual capacity of 12,000 metric tonnes, is in a sweet spot, a rarity these days in a segment such as API manufacturing, where China has taken a lead over India. "We are noticing shortage of products from China and rise in prices. This is a big opportunity for the companies in India to build global capacity to take advantage of the trend. For instance, we have - over the past one year - more than doubled our ibuprofen API capacity from 5,000 metric tonnes per annum to 12,000 metric tonnes," says Vijay Garg, Joint Managing Director, IOL. The company has "33 per cent world market share for the product as against 10 per cent a year ago," he says.

The reasons lie thousands of miles away in problems that the API or bulk drug industry - which provides key ingredients for tablets - is facing in China. Around mid-2017, China's Food and Drug Administration joined the International Council for Harmonisation of Technical Requirements for Pharmaceuticals for Human Use (ICH) as a member. China also became a member of the Geneva-based Pharmaceutical Inspection Convention (PIC). The steps required the Chinese

regulator to become more stringent. This resulted in shutdown of massive capacities in China, for years a big supplier of bulk drugs globally. Though this has led to a rise in prices of bulk drugs - a key input for pharmaceutical companies - some Indian bulk drug makers like IOL are trying to fill the gap left by the Chinese. "This could be a blessing in disguise for the Indian API industry," says D.G. Shah, a veteran in the Indian pharma industry. The former director-general of Indian Pharmaceutical Alliance had shared this and other insights with Business Today just before his sudden death in February this year. 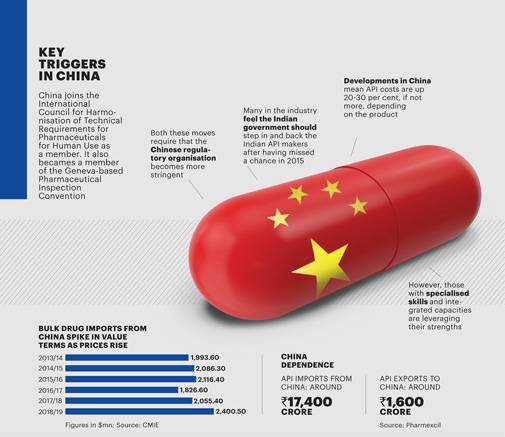 Garg says due to regulatory challenges and environmental issues, some units in China have stopped production, resulting in a shortage of ibuprofen API in the global markets. IOL has been able to feed into the global markets vacated by China such as markets in Latin America and Europe. He estimates that the production of ibuprofen API in China is down from 9,000 metric tonnes a year in 2017 to 6,000 metric tonnes today. Exports account for 40 per cent sales of IOL. Garg says India and the US are the two biggest markets for ibuprofen. "We are right now not selling in the US, but have started the qualification process and hope to start later this year. A year ago, we were largely a domestic player. Now, close to 80 per cent of our added capacity is for exports." It is a market that China was servicing earlier. There is no study on the precise impact on India, but the general view is that prices of bulk drugs have risen 20-80 per cent in the last six-eight months depending on the drug concerned. IOL has been able to increase domestic prices by 30 per cent in the last one year.

An ace at carving out a niche in the global market is M. Narayana Reddy. He had founded Virchow Laboratories in Hyderabad in 1981 to make sulfamethoxazole, an antibacterial drug used as a low-cost, broad-spectrum antibiotic. Back then, there were 30 others in the city making it. Today, Virchow Labs - the flagship company of the Rs 3,500-crore Virchow Group which makes numerous drugs, drug intermediates and biopharmaceuticals - is the biggest producer of sulfamethoxazole in the world, manufacturing around 7,000 tonnes per annum. "The company today meets over 85 per cent global demand for this product," says Mundla Vishnu, Reddy's son and Director at Virchow. No other company makes sulfamethoxazole except one in China and, that too, is able to meet only a small part of the local demand. Reddy has been able to build a niche in this space by complete vertical integration. The starting point for sulfamethoxazole, for him, is substances as common as sugar and sulphur. Virchow has been supplying to China as well and is expecting a rise in margins after the 10-year anti-dumping curbs there ended in mid-2018. Other than this, over the past three years, Virchow has been supplying a drug intermediary called GCLE. Made at its another group company, Virchow Petrochemicals, it is an intermediate for making cephalosporin, a broad spectrum antibiotic. "Today, there are hardly any makers in China for this intermediate," says Vishnu. Virchow has been supplying this to China for the last four years, but Narayana Reddy says the Chinese government has also started investigating GCLE for possible imposition of anti-dumping duty on the lines of sulfamethoxazole. "We are sharing all the data to show there is no valid case for such a move,'' says Reddy. The two products - sulfamethoxazole and GCLE - account for around 30 per cent of the group's revenue.

Some companies have done vertical integration to manufacture ingredients and manage input price variations. Hyderabad-based Laurus Labs says developments in China may have a short-term negative impact for companies in India, but are likely to be good for them in the long run. "For antiretroviral APIs, we have started making some of the intermediates we were getting from China," says Chava Satyanarayana, Founder and CEO of Laurus Labs. "This helps us overcome surprises in prices and supply disruptions," he says. Antiretrovirals account for a significant revenue earned by Laurus.

Then, there are those who have sensed a new opportunity and are planning accordingly. One such player is Jubilant Lifesciences. "There is strong demand for crop protection intermediates because of environmental issues in China, which Chinese factories are not able to meet. Hence there is a good opportunity for our crop science ingredients business to develop and launch new products," says its 2017/18 annual report. "We plan to launch five new products in the near future. However, we may face competition in these products once Chinese producers shift their plants to new locations to increase manufacturing capacity. We plan to mitigate this risk by planning alternative products using the same assets (i.e., our multipurpose plants) optimally as per the contribution margin," it adds.

According to Pharmexcil, in 2018/19, India imported Rs 17,400 crore worth of APIs from China and exported APIs worth around Rs 1,600 crore. This shows India still has to cover a long distance in substantially reducing its China dependence. So far, the India API industry has been surviving on a margin of 6-8 per cent, mainly due to Chinese dominance. One will have to see the extent to which the current price rise entices the Indian players to strengthen their API businesses. There are 300-400 API makers in India. The hub is Ankleshwar, the largest chemical cluster in Asia, followed by Hyderabad.

But then, replicating overnight what China has done over several years is impossible. Many in India are disappointed by the relative government inaction and lack of support to the industry's efforts to build API capabilities. This despite the government designating 2015 as the year of APIs to make the country self-sufficient in bulk drugs. Many Indian companies are still dependent on China for key intermediates like penicillin derivatives and cephalosporin derivatives.

Deepak Sapra, Senior Vice President & Head, PSAI Business, Dr. Reddy's Laboratories, says: "We are seeing an impact on certain APIs and intermediates due to the recent developments in China. However, the Indian pharma industry has capitalised on the situation to reinstate the production of certain APIs in the country. The efforts by the Indian pharma will continue to bring the sector back on the growth trajectory. The government should also promote manufacturing within the country to reduce the dependency on imports." To what extent the new government listens needs to be watched.