If you are like most people at the gym, you are familiar with the ‘cheat biceps curl’. This is because most lifters, more men than women, like to curl as much weight as they can.

Jamal Shaikh
If you are like most people at the gym, you are familiar with the ‘cheat biceps curl’. This is because most lifters, more men than women, like to curl as much weight as they can. As a result, they end up swaying their upper body back and forth, like one of those dunkingbird pendulums you find in novelty shops. Not only does this look stupid, it’s a good way to throw your back out of gear as well.

In Part 2 of our Killer Biceps series, we list out two Men’s Healthendorsed ‘cheat curls’ that help build strength and power, along with size, of course. The first (A) makes use of falsely made oversize grips that will help you add more iron to your arm workout, and more muscle to your arms. The second (B) shows you how to lift extra-heavy and fast without losing form. By focussing on speed and strength at the same time, you’ll work on your deepest, largest muscle fibres, a process that helps create thicker, denser-looking muscles.

Whoever said cheaters never prosper sure didn’t know what he was talking about! 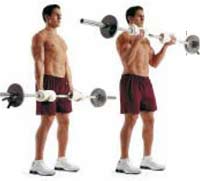 A. curl for strength
The following two exercises utilise towels to create oversize grips, which force your forearms to work harder than usual. Try the workout below twice a week for three weeks. When you switch back to your normal grip, you’ll find you’re stronger than ever. Do 3-5 sets of the first exercise, then 3-5 sets of the second exercise. Rest 90 seconds after each set.

1. Fat-grip Barbell Curl (4-6 reps)
Wrap two hand towels around a barbell and grab the towel-wrapped bar with an underhand, shoulder-width grip. Hold the bar at arm’s length in front of your thighs. Without moving your upper arms forward or changing your posture, slowly curl the bar as high as you can. Then, without pausing, take three seconds to lower it back to the starting position. 2. Dumb-bell Towel Curl (4-6 reps)
Loop a hand towel around each handle of a pair of dumb-bells and hold the weights by grasping the ends of each towel. Hold the dumb-bells at arms length next to the sides of your legs, your palms facing each other. Without moving your upper arms, slowly curl the dumb-bells as high as you can. Then, without pausing, take three seconds to lower them back to the starting position. 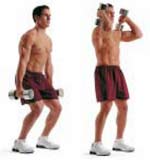 B. Curl for power
Use this power cheat curl to get the benefits of heavy, explosive arm curls, without the danger to your lower back. Do 4-5 sets.

1. Dumb-bell Power Cheat Curl (2 or 3 reps)
Grab a pair of heavy dumb-bells and hold them at arm’s length next to your sides, your palms facing each other. Lean forward at your hips and bend your legs until the dumb-bells are next to and in line with your knees, or just above them. Now, curl the dumb-bells, push your hips forward, and straighten your legs all at the same time, until you’re standing upright and the dumb-bells are almost resting on your shoulders. Lower the dumb-bells back to the starting position and repeat.

Rev up your metabolism in three simple steps