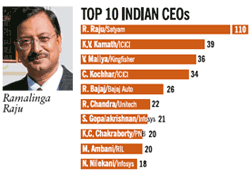 Click here to Enlarge
Clearly, the persisting slowdown in the global economy and businesses was the point of comment and media engagement with CEOs across the world in December. However, in India it was mostly commercial issues about respective businesses that captured media attention.

CEO of the Month
A staggering 22 per cent of overall news coverage dedicated to CEOs in India was dominated by Satyam’s Ramalinga Raju. He was mentioned in 65 per cent more articles than the next most visible CEO, K. V. Kamath. The articles mostly questioned corporate governance at Satyam and shareholder activism. Expectedly, the media sentiment was unfavourable and he was the most unfavourably reported CEO (45 per cent unfavourable mentions) and criticised for “making a mockery of the principles of corporate governance.” Infosys Co-Chairman Nandan Nilekani was the most favourable CEO of the month, commended in reviews for his book, “Imagining India” for morphing “into one of the country’s most respected think-tanks on everything from IT to infrastructure.”