The BSE Sensex seems to be on steroids, and the way it is going, it may well cross the 18K-mark by the time this magazine hits the stands first week of October.

The BSE Sensex seems to be on steroids, and the way it is going, it may well cross the 18K-mark by the time this magazine hits the stands first week of October. The exuberance in the market was triggered by the 50 basis point cut in interest rates by the US Federal Reserve on September 18. Since then, in eight trading sessions ending September 28, the Sensex has gained 1,692.35 points or 10.8 per cent to close at an all-time high of 17,361.47.

Over the same period, FIIs have pumped in nearly $2.8 billion (Rs 11,310 crore); outflows during this time by local funds were a mere Rs 996 crore. 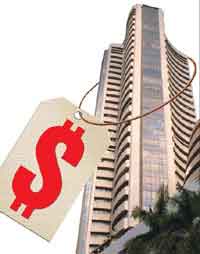 The surprising part is that the inflows come at a time when the Indian economy is showing some definite signs of sluggishness—the Index for Industrial Production (IIP) for July 2007 was down to 7.1 per cent compared to 13.17 per cent in July 2006. Concerns over political instability in the country—there’s talk of mid-term general elections in the air—the appreciating rupee (it was at Rs 39.85 per dollar on September 20) and rising crude prices ($84 per barrel) are still question marks that haven’t been resolved to anyone’s satisfaction.

Says Rashesh Shah, CEO& MD, Edelweiss Securities, a leading stock broking and research firm: “This is a liquidity-driven rally. Players are rediscovering Asia and some sort of re-rating is happening in the equity market across Asia. As China and India are at the forefront of the Asia growth story, these markets have benefitted the most from this.” Agreeing with him, Nilesh Shah, CIO and Deputy MD, ICICI Prudential Mutual Fund, adds: “The US Fed has eased the liquidity position by making money relatively cheap. Thus, funds are re-entering markets they had left due to concerns over the US subprime crisis.” Defaults in the US sub-prime market had seen FIIs, especially hedge funds, selling equity worth $1.9 billion (Rs 7,200 crore) in emerging markets in August. However, the easing liquidity situation back home has seen them heading back to countries like India.

Andrew Holland, MD, Strategic Investment Group at DSP Merrill Lynch, says: “Liquidity is coming back into the market and people are optimistic about growth. Most Asian markets are reaching new highs and India is benefitting from this trend.” Since the Fed rate cut, China and India gained the most among emerging markets. According to the MSCI Emerging Market Index, China gained 15 per cent and India 12 per cent. Prior to the rally, BSE Sensex companies were trading at a price to earning ratio of 15 times.

Says Shah: “The market can always surprise people. At a given point in time, a stock trading at a PE multiple of 8 can look unattractive; in a different context, the same stock can look cheap at a PE multiple of 80. At current levels, Indian stocks are overvalued; but if you look at one-year forward, they are still trading at fair value.” And, in any case, the Indian market remains cheap compared to other emerging markets, he adds.

For fund managers, the biggest concern is the political scenario in the country. With several state elections due in the coming months, they fear that the government may be tempted to introduce populist policies that could harm growth. Then, there is the very real fear that the rift between the Manmohan Singh government and its partners on the Left over the ramifications of the India-US nuclear deal may widen and lead to mid-term general elections. Investors are wary that a government in election mode may well give in to populist impulses that can cause long-term damage to the Indian economy.

Then, there is the relentless rise of the rupee—to a nine-yearhigh— against the dollar. Says Shah: “Sectors like textiles, IT, chemicals, engineering and auto ancillaries will have to cope with the rising rupee.” Analysts say that India Inc. will just have to learn to live with the costlier currency. So, is this rally really a bubble? Says Rakesh Jhunjhunwala, CEO, Rare Enterprises: “The US sub-prime crisis will hit economies across the globe. If interest rate cuts could resolve risks, then economies across the globe would never see a slowdown. The current rally is the excitement before the climax. It’s time for market to correct, absorb and consolidate.” Agreeing with him, Shah adds: “The biggest problem for our market is that there is no strong force to counter the influence of foreign money.”

So, if you’re betting on Sensex proving Newton’s Law of Gravity wrong, it may be a good idea not to put your money on it.