Inflation is a bugbear that continues to give mandarins in the economic ministries sleepless nights. The latest figures show it at 11.98 per cent for the week ended July 19. Sub-normal rainfall in large parts of India can push inflation to 14 per cent.

Inflation is a bugbear that continues to give mandarins in the economic ministries sleepless nights. The latest figures show it at 11.98 per cent for the week ended July 19. The Reserve Bank of India has already raised the CRR and repo rate again in yet another desperate attempt to curb inflationary pressures in the economy. But worryingly, RBI estimates that the inflation rate will remain a concern due to high global crude and food prices. Admits a bureaucrat: “Food prices remain a concern for the government. They could moderate by the end of the year if the monsoons are good.” 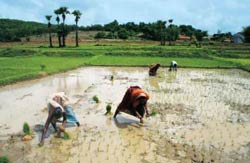 Inflation at 14 per cent? Yes, blame it on the monsoons, or rather, the lack of rain
Clearly, the government is banking on good monsoons to come to its rescue. An adequate and well-distributed monsoon is crucial for the kharif crop in July and August. Says Abheek Barua, Chief Economist, HDFC Bank: “The monsoons will be an important factor in controlling inflation in both food and non-food primary articles.” Only 40 per cent of India’s arable land is irrigated, and the remainder depends on the monsoons. At stake: crucial crops such as rice, wheat and oil seeds.

There was encouraging news to begin with. The Indian Meteorological Department (IMD) forecast that the South West Monsoon (June-September)this year would be normal in most parts of the country. It touched Andaman & Nicobar and Kerala by the end of May, slightly ahead of schedule. But since then, it appears to have gradually lost momentum. Says Ajay Parmar, Head (Research), Emkay Global Financial Services: “The South-West Monsoon has got weaker.” IMD now says the cumulative seasonal rainfall for the country during this monsoon has been 2 per cent below the long period average.

There’s more bad news. The number of districts receiving deficient or scanty rainfall has gone up from nine to 15 over the last month. In the rain-dependent areas, the weighted average rainfall has now fallen below normal by about 5 per cent compared to the corresponding figure of 39.3 per cent above normal a month ago.

How will this impact the economy? That will depend on the geographical spread of the rainfall, coupled with the cropping pattern in the states. Rainfall in states like UP, Punjab and Haryana continues to be strong. These states are well irrigated and, hence, the excess rainfall should help to build up reservoir levels for the future. This augurs well for the wheat harvest in winter. But rainfall continues to elude states like Maharashtra, Chattisgarh, Andhra Pradesh, Karnataka and Tamil Nadu. Even Gujarat is now facing scanty rainfall. This has worried the Union Agriculture Ministry even as it asserts that the country could have bumper harvest of food grains this year. Gujarat is the country’s biggest grower of cotton and peanuts, while Maharashtra is the secondlargest producer of soyabean and cotton. Andhra Pradesh is the second biggest grower of rice, peanuts and sunflower.

Says Parmar: “Key crops such coarse cereals, oilseeds and cotton are at risk.” Adds Barua: “There are already reports that the impact of inadequate monsoons in these regions on crops is beginning to show. There is a clear problem.”

The weathermen predict that rainfall is likely to increase over rainfall-deficient regions in Andhra Pradesh, Maharashtra and Gujarat in the days to come. But if the present trend continues, economists fear, agricultural growth in 2008-09 could be sharply lower than the robust 4.5 per cent seen last year. And that will make it that much harder for the government to control inflation. Says Barua: “If the monsoons don’t improve over the next one month, we could be looking at an inflation rate of 13.5-14 per cent by October.”