A bumper harvest and comfortable stocks could lead to an easing of food prices.

Many historians now claim that it is an apocryphal story, but the myth endures. Confronted with a shortage of bread among the peasantry over 200 years ago, French Queen Marie Antoinette reportedly said: “If they have no bread, then let them eat cake.” Faced with global food shortages, modern day rulers cannot afford to be so callous and cavalier. Now, as global food prices show some signs of cooling, India seems to have ridden out the roughest patch and many experts believe that the worst is over. “India has managed to avoid the worst in terms of food inflation,” says Ashok Gulati, Director (Asia), International Food Policy Research Institute (IFPRI). He points out that food inflation in India is probably a third of the rate prevailing anywhere else in the world. Also, he points out, inflation has had no effect on the issue price at Public Distribution System outlets, which serve large swathes of the poor. 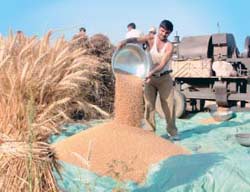 Inflation no longer a threat
This feeling of comfort is bolstered by the record domestic food grain production in 2007-08 of 227.32 million tonnes at last count. Government agencies had mopped up 18 million tonnes of wheat—almost a quarter of the production this year—till May 8. In a country where rice and wheat are the key staples, the buffer stock is an important moderator ofprice expectations. And for now, the stocks are comfortable. “The situation will ease in the short term, especially if the monsoons are normal as forecast,” says Subir Gokarn, Chief Economist, Standard & Poor’s Asia-Pacific. “The prospects for the kharif season also look reasonably good. Over the longer term, however, some threats remain,” he adds.

That is especially true for edible oils, as India imports more than two-fifths of its requirements. The same logic is applicable to pulses where again India relies on imports to shore up domestic output.The recent spate of trade measures across the world in terms of export bans means that India cannot import its way out of the problem even though the country’s coffers are overflowing with foreign exchange.True, India exports far more food items than it imports, yet the risks remain. S. Sivakumar, CEO (Agri Business), ITC, points out that “since demand is not going to reduce, the current measures (whether increasing imports or banning exports and futures trading) will not help much in the medium term.”

Hence, one needs more durable responses that affect the long-term prospects for Indian agriculture. The solution, therefore, is really to go back to the basics—improve yield per hectare and focus on building efficiencies in the supply chain.

And those responses will necessarily have to include responses to new risks such as climate change and rapidly rising energy prices.

The latter can completely throw out of gear India’s fertiliser policy and muddy the price signals to the farmer. Fertiliser subsidies, estimated at almost Rs 60,650 crore for 2008-09, have almost quadrupled over the last four years. No wonder, the government’s deficit is swelling.

The recent amplification of the ban on futures trading to include four new agri-commodities is another example of sending confused signals to the farmer, who has to respond with appropriate supplies.

Hence, while the immediate trigger for long-term change in the agriculture sector may wane somewhat if prices ease, it should hardly be a reason to turn attention away from the sector. It is time to focus full time on agriculture. The government should use this crisis as a wake-up call.