News
Magazine
Trends
How Roposo, Wooplr are trying to change the world of fashion retail

How Roposo, Wooplr are trying to change the world of fashion retail

Start-ups like Roposo, Wooplr, Violet Street let users who are fashionistas create and curate looks and direct conversations on styles.

Social conversations and recommendations around food and travel have shown they have the power to make or break the food and beverage outlets and shape the tourism space.

Now a host of fashion discovery apps and sites that run on user-generated content are beginning to influence apparel retail. Start-ups like Roposo, Wooplr, Violet Street let users who are fashionistas create and curate looks and direct conversations on styles. For instance, if you are looking for a little black dress, or LBD, then you just need to go to a fashion discovery app that will pull out its top picks and direct you to stores where you could get the dress. Unlike Pinterest where users pin content from here and there, the content is usually original on these social fashion discovery sites.

Both investors and smart retailers who understand the power of social discovery to drive e-commerce are investing in these apps. Roposo and Wooplr have bagged funding in recent months. Roposo, set up by three IIT Delhi alumni - Mayank Bhangadia, Kaushal Shubhank and Avinash Saxena - which had initially got angel investment from the likes of Flipkart's Binny Bansal, has just got a $5 million funding from Tiger Global. Similarly, Wooplr, set up by four McAfee employees - Arjun Zacharia, Praveen Rajaretnam, Soumen Sarkar and Ankit Sabharwal - has also just got a funding of $5 million from Helion Ventures. Wooplr had earlier got angel investment to the tune of $225,000 from a group of investors.

Unlike food and travel, where the written word carries weight, social fashion is a highly pictorial-driven place. Perhaps, this explains why ever since Roposo launched a mobile app four months ago, it has seen a tremendous spike in users contributing to the content.

As Bhangadia, co-founder Roposo, points out, users find it far easier to do photo reviews from the mobile where they just need to click and add a picture from the device. According to him, since the move to mobile app, 23 per cent of their unique users create content. "On the web it was low," he admits, though he says that features like lists and all see traction there. Roposo (the name is a play on Apropos) claims it gets two million visits every month.

Wooplr, which had launched its mobile app as far back as 2013, aims to touch five million app downloads in the next 18 months, says Rajaretnam, its co-founder and Chief Marketing Officer.

What if the marketplaces themselves invest in a social discovery engine? Bhangadia says that is not a threat as "somebody neutral has to do it". For both Roposo and Wooplr, affiliate marketing (getting paid by e-commerce sites for leading users to it) is a revenue stream. Wooplr also has Social Storefronts to drive more leads and sales for SMEs. They will be charged either a subscription fee or on a pay per transaction basis.

So more the users better is the chance of monetisation for these sites. Aren't Indian users far more self conscious when it comes to posting about their shopping compared to China and elsewhere? Do they need incentives to post? "We do not incentivise generally. Only when we launch new features - such as photo reviews - we incentivise through coupons," says Bhangadia.

Rajaretnam of Wooplr feels India is catching up with China in terms of user generated content. "We are seeing more and more users being comfortable with sharing content online and we can expect a social commerce boom in the near future," he says. 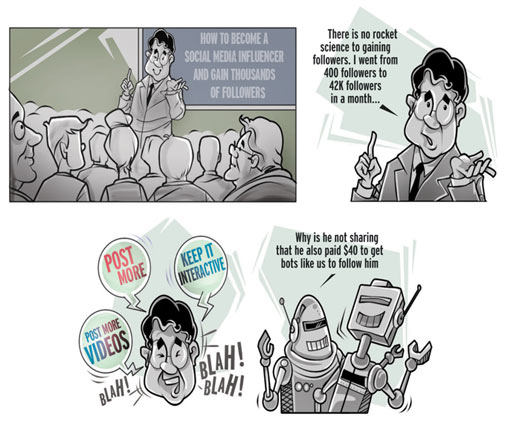 The king of search, Google, and the king of speed, Twitter, have teamed up to make searching for tweets an easy experience. Users can now 'twoogle' it on Google! This is truly a useful alliance as searching for old tweets or people on Twitter has always been pretty painful. If users benefi t, it's a win-win deal for both Google and Twitter as the former gets a boost to its search capabilities while the latter can potentially gain new users. Of course, the partnership has also now fuelled rumours of a possible merger between the two. If that happens, then the only loser will be Google+.

Tired of dealing with content overload, the noise, the conversations that end up drowning out the useful stories on Twitter? Two new social networks have come up to tackle this. One is This. (spelt with a period) and the other is Catchpool. Both are fairly similar to Twitter in the sense that users can follow people and companies. The difference is that these are designed like social magazines - a bit like Flipboard and Pulse (now owned by LinkedIn), except that instead of pulling content into their apps, Catchpool and This. send you to publishers' sites. The content game is always a tough one to crack so let's see how these new networks fare. Meanwhile, Twitter is not sitting idle - there are rumours that it could be acquiring Flipboard.

There are days when you may not even have the time to scroll down your social media feeds and might miss out on potentially exciting news. Twitter solved this by sending you email digests of the best tweets you might have missed. Facebook's solution was to push notifi cations and fi ltered feeds. Now it's Instagram's turn to boost engagement through email 'highlights'. This could also potentially wake up inactive members. It also shows that the email is still highly relevant and is not going to die out just yet!