Stand-alone health insurers are making a mark, writing novel policies that cover everything from joint families to a visit to the dentist.

Damien Marmion
Two years later, he felt that the amount was not sufficient to cover the rising medical costs and asked the insurance company to raise the sum insured. He was particularly worried about the Rs 1,500 per day room rent cover during hospitalisation.

"Today, we have products with a lifelong policy renewal feature - covering you from cradle to grave," says Antony Jacob, CEO, Apollo Munich, a 74:26 joint venture between the Apollo Hospitals Group and Germany-based Munich Re. The penetration of health insurance in India is abysmal - only about one per cent of the population is covered under any form of health insurance according to the National Council of Applied Economic Research (NCAER). Contrast this with the United States where 85 per cent of the population is covered or China at 77 per cent. This, say these private companies, is because products and services are not fully designed to meet the unique requirements of Indian families. "So far, the insurance products in the market have ignored the needs of Indians. But now, the pure health players are launching products keeping the customers in mind," says Jacob.

Consider the example of Max Bupa, owned 74 per cent by Max India and 26 per cent by Britainbased Bupa. It entered the market in April 2010 and recently launched a plan, Family First, that covers an extended Indian family of up to 13 members, including parents, spouse, children, brothers, sisters, and even in-laws, grandparents and grandchildren through one policy.

It offers individual insurance cover for each insured person - ranging from Rs 1 lakh to Rs 5 lakh - apart from a floating insurance cover that is available to all family members. This is a big departure from the industry norm where family floater products cover only nuclear families with a maximum of two adults and two children.

In addition, the maximum sum insured in usual floater policies is Rs 10 lakh, whereas Max Bupa Family First gives coverage of up to Rs 15 lakh.

"The product has been designed keeping in mind the needs of joint families. It is the first time that individual cover and family floater cover have been combined in the same policy," says Damien Marmion, CEO of Max Bupa Health Insurance. The plan has other unique features. It offers maternity hospitalisation and newborn baby cover - features that were till recently available only under group mediclaim Max Bupa, which is connected to over 600 hospitals across the country, was also the first insurer to introduce "single-age band pricing" products.

Here the company determines the premium solely on the basis of the individual's age. "So, it helps avoid a sudden spike in premium when an individual crosses a particular age limit," says Marmion who thinks that although Max Bupa's policies are 15-20 per cent costlier than somewhat similar products by its competitors, customers are ready to pay.

Another fleet-footed entrant is Apollo Munich, which flagged off operations in August 2007. Health insurance policies issued by non-life insurers typically do not offer cashless treatment at OPDs, or outpatient departments, and health check-ups. Apollo Munich's product Maxima has started offering, for the first time in India, cashless inpatient and outpatient treatments. The plan is available for both individuals and family, which can include two adults and two kids. While the sum insured on inpatient treatment is Rs 3 lakh, the limits on OPD expenses varies between Rs 5,000 and Rs 7,000 at any of the over 1,500-odd pharmacies, diagnostic centres and consultants empanelled by Apollo Munich.

"Forget the big diseases, we offer insurance even for allergies, sore throat and cracked lips. The aim of this product is to shift the focus from curative to preventive coverage," says Jacob. Maxima was launched in August and the company is expecting to sell over 5,000 policies by the end of the financial year. Star Health and Allied Insurance, which started operations in 2006, also has a first to its credit. It has launched the first health product for diabetics (Diabetes Safe) that covers the cost of hospitalisation of up to Rs 5 lakh. Diabetes often leads to trouble in the kidneys and the eyes, and can cause crippling foot ulcers. India has the world's largest population of diabetics: 51 million and counting. 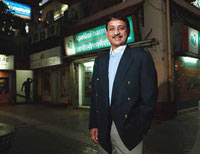 Antony Jacob
"Any person diagnosed with Type II Diabetes can take this policy between 26 and 65 years of age and can get renewals till age 70," says V. Jagannathan, Chairman and Managing Director of Star Health and Allied Insurance, which also has a product for HIV positive patients. Star Health, which is available at more than 4,600 hospitals, also has top-up health policies that give extensive medical coverage and are cheaper than the regular policies. For instance, a Star Super Surplus top-up of Rs 7 lakh costs around Rs 7,500 per annum for an individual while a regular Oriental Insurance policy of Rs 3 lakh costs Rs 8,500 annually.

In India the public sector still accounts for 58 per cent of the health insurance market. But the private companies are making inroads, and the stand-alone ones among them have taken 12 per cent of the total market. Clearly, the growing competition will mean that the customer will truly be king in the future and is likely to be spoilt for choice.