The rise of online library to suit changed lifestyles

Hiten Turakhia, Founder, Librarywala.com
Saranya Kapur.
Once upon a time, before the rise of the Internet and the emergence of hundreds of television channels, the library was where people went for both information and entertainment. It was here they learnt about global events, or were transported to distant lands. But then the library became a victim of rapidly changing lifestyles, and was on the verge of being wiped out. That is until it rediscovered itself in a new avatar: the online library.

Putting library catalogues online is now a growing trend, with several start-ups offering the service, and some traditional libraries following suit. In February 2010, the British Council Library, or BCL, at Mumbai's Nariman Point, arguably the best-known library in the city, opted to close down and focus entirely on its online service. With online libraries sprouting all over India, are traditional libraries becoming obsolete?

Yes, says Hiten Turakhia, one of the founders of the Mumbai-based librarywala. com, the country's first online library service. "Due to busy schedules, fewer people are willing to spend their precious free time travelling to a library," he says. "This is where online libraries come in, where the books are delivered at your doorstep."

Librarywala.com started its services in 2007 and soon expanded to Bangalore, Pune and Mysore. It stores 25,000 unique titles in English and six regional languages, and has 11,000 active members. After paying a registration fee, members can choose from 19 reading plans, depending on what suits them, and pay a refundable deposit on the books they borrow. 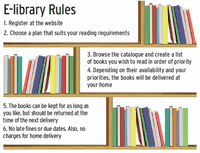 Click here to Enlarge
"Reading has become an expensive habit and we aim to make it affordable and convenient," says Turakhia. "With free home delivery and cheap plans, online libraries have the potential to make reading accessible to everyone." Librarywala.com also plans to start a mobile service through which customers can order books by sending SMSes. "With the rollout of the SMS service, we can reach out to those people who are not very Net savvy," he adds. A similar model is followed by doorstepbooks. com, a Kolkata-based startup.

But this one goes one step further - by delivering books to Tier-II cities in West Bengal using courier services. The demand in such small cities, still, is not high, says Vikash Khandelwal, founder of doorstepbooks.com. "In small towns life is not as fast-paced as it is in the metros. The options for entertainment are also limited. People still enjoy going to the library and picking up books."

Mobility is also not a problem, compared to the metros, where people may have to put up with heavy traffic or use crowded public transport to make a trip to the library. Most of his customers are families subscribing to the library for the children, or people above 40.

Khandelwal does not believe online libraries can ever completely replace physical libraries even in large cities. "The clientele online libraries cater to is different. People have very different reading habits. Many young working professionals either do not have the time to read or have moved on to e-books. Similarly, people who truly enjoy visiting a brick-and-mortar library will continue to do so whether an online option exists or not," he says.

Both Turakhia and Khandelwal find that the demand for online libraries is highest among schoolgoing children. Indeed, Chennaibased iloveread.in even has a special plan to target secondary schools in the city, apart from its retail plans for individuals. It supplements books in the school library and has full-time storytellers on board to run weekly programmes in schools comprising activities like storytelling, book readings, alternative story endings and writing letters to the author, among others. Says Sahil Gore, one of the founders of iloveread.in: "Children pick up reading instantly, if it is introduced to them as fun, and our activities are designed to do exactly that."

Mumbai's BCL leads the pack of traditional libraries that have developed a Net presence as well. Abhishek Chandan, Head of 'mylibrary', BCL's online initiative, says the reason for going online was the topographical constraints Mumbai's residents have to deal with. "The BCL was located in the extreme south, while the city was growing linearly northward," he says. "The business district too, which earlier was concentrated in the south, has now moved north." This was reflected in BCL's customer base, which has been in decline over the last two decades, from 28,000 in the early 1990s to 3,600 in 2009.

After carrying out extensive surveys, BCL launched mylibrary in 2010 with the help of Tata Consultancy Services as a software partner. After a year of operation, the online service - available on www. mylibrary.britishcouncil.org - now has around 3,500 members. Depending on the plan a customer chooses, mylibrary charges as little as Rs 35 for a book. It has around 18,000 unique titles, including rare books and e-books.

Even small, mom-and-pop libraries seem to have realised that extending their presence online is essential. Ram Gopal Sharma and Sons, a family-run library in Delhi's Connaught Place, has been around since the 1930s. In 2007, however, it decided to open an online library, bookmeabook.com. Nidhi Verma, who runs the online operation, says: "The library in CP used to be extremely popular till a few decades ago. But as the area's profile changed, our customers began to move to satellite cities like Gurgaon and Ghaziabad. It was no longer feasible for them to travel the distance to the library." Bookmeabook. com currently has between 600 and 800 members, most of whom are school children and retired people.

With almost everybody, including companies, today having blogs, facebook pages and twitter accounts, online libraries too depend on social media to reach out to their customers and generate buzz. While bookmeabook.com relies on its facebook and twitter pages for announcements, librarywala.com and mylibrary have an active online community where people discuss and review books, thus creating a community atmosphere which could otherwise be had only in a physical space. Gore of iloveread.in, however, has a different take. "Social media doesn't work as well for reading compared to other businesses," he says. Some like iloveread.in provide links to Amazon and Google Books reviews of its books, and creates community spirit through events like its annual 'Mad Librarian's Tea Party', with musical performances and storytelling sessions, where customers get to know one another and the team.

So, while online libraries may not replace physical libraries altogether, they are definitely here to stay.