Specials
BT Specials
Magazine Archives
News
Magazine
Utility
What should you do if your conscience keeps jabbing you over work issues?

What should you do if your conscience keeps jabbing you over work issues?

It is not a fuddy-duddy idea to pay heed to your conscience at work.

Shamni Pande
Thank You and Goodbye' was the headline with which News of the World, the British tabloid in the dock for widespread illegal phone hacking, announced its closure on July 10. Rebekah Brooks, who resigned as its Chief Executive following the scandal, will forever have to deal with the mess.

As stories gush out about the questionable information gathering measures used by the newspaper and pressures that reporters were put through to land exclusive scoops, the question arises: why did the seniors at the newspaper condone or, even worse, encourage such practices? There is a growing debate among management and human resource experts about the challenges of creating and nurturing ethical behaviour in organisations. Shamni Pande
A successful consultant I know has sued some of his ex-employees for negotiating a contract while they were working for him, and then quitting to set up their own shop. These are stories that we routinely hear. But what if you had to deal with such a situation? Would you have informed the boss about what the employees were planning? Certain work cultures, as was apparently the case with News of the World, create an environment high on machismo, which applauds employees who are able to get results, no matter what tactics they use.

ARCHIVE: The most ethics-driven MNCs

"Few grasp how their own cognitive biases, and the incentive systems they create, can conspire to negatively skew behaviour and obscure it from view," say Max H. Bazerman and Ann E. Tenbrunsel, authors of Blind Spots: Why We Fail To Do What's Right and What To Do About It. "Only by understanding these influences can leaders create the ethical organisations they aspire to run.'' The authors, in their article Ethical Breakdowns on hbr.org, have grouped such slip-ups under five heads: ill-conceived goals, motivated blindness, indirect blindness, the slippery slope, and overvaluing outcomes. 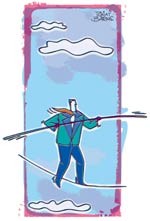 It is not a fuddy-duddy idea to pay heed to your conscience at work.
These are manifest in many situations when tough goals are set with lucrative incentives thrown in. Examples of unethical behaviour are many: employees inflating billable costs to clients; sports coaches pushing their athletes to win at any cost, and turning a blind eye to the consumption of steroids; companies circumventing the law by using accounting loopholes; auditors ignoring small lapses that have over a period of time populated the account books of companies; or pharmaceutical companies conducting clinical trials wihout proper checks and balances.

Most employees who have been trapped in such situations claim they do not even look at their business decisions through the ethical prism. They prefer to think of such decisions as 'purely business'. Ethical behaviour is taken for granted by most of us who have largely worked in upright organisations. But it does not take too much for things to turn ugly. Suppose you discover that your boss is moonlighting for another organisation.

Or suppose you find some of your co-workers trying to sabotage a project because of illegal favours they have received. Or let us say your section head is aggressive about achieving targets without paying heed to how it is being done. All clear and present dangers today.

So, what should you do if your conscience keeps jabbing you over work issues? You should try and discuss the matter with your immediate superior or go to the next level. Being clear about where exactly the problem stems from, helps. To protect your own position, it is worth keeping a clear email trail that serves as backup for the actions you take. If you feel a herd mentality is driving most of your colleagues and remonstrating with them will not be of much use, stick to your own job and do it the right way - even if it means being dubbed a relative underperformer.

However, it is best to prepare a Plan B that says 'Thank You and Goodbye'. The reality is there are workplaces that are beyond repair.