Recommended for a quick, fuss-free bite if you work in the vicinity or are around for a spot of shopping.

This place is all about location. Situated right next to two heavyweight eateries, Sarvana Bhavan (south Indian) and Shiv Sagar (of Mumbai chaat fame), Zamozza is in a prime part of Janpath where there is enough footfall to ensure the space looks reasonably full most days.

You walk through a narrow corridor into a wide space that's modern, aesthetic and neatly laid out. The chairs are comfortable and the overall vibe is that of casual chic. 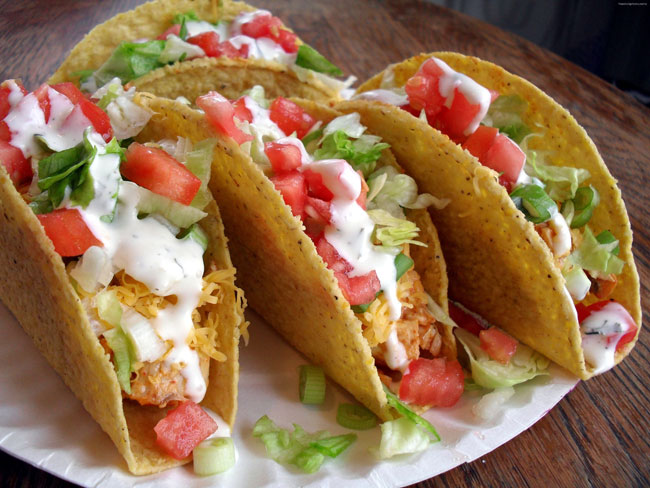 Mexican Tacos
The menu is a mish mash of various influences, ranging from Turkish and Lebanese to Mediterranean and European and attempts to put some strong flavours on your plate.

The lexicon used to divide the menu is a bit odd with things being compartmentalised into 'herbivorous and carnivorous tidbits' and the like. Begin with the prawn or chicken dim sum if you fancy something light. The casing is not doughy and the filling is simple and delicious. Want something different? Try the kibbeh which is a Lebanese staple made of minced lamb or the chicken quesadilla served with sour cream and guacamole which is delicious.

The vegetarian or non vegetarian mezze platters are popular as well but despite the fact that they mention that the falafel is deep fried, I found it a tad too oily, taking away from the entire experience.

The Som Tam salad was another disappointment, with the papaya looking tired and the dressing overly sweet. I would suggest you skip the salads entirely and stick with the pizzas and pastas which are harder to go wrong with. Turkish Platter
For mains you could also stick to the fajitas or chicken breast, both of which are tasty and simple. Avoid the Thai basil chicken in oyster sauce served with rice; the dish lacked coherence and the flavours were all over the place. There are plenty of vegetarian options to choose from as well.

For dessert, stick to the tried and tested chocolate lava cake which is a staple on most restaurant menus nowadays and steer clear of the cheesecake which has a synthetic flavour and does not do justice to its menu description.

While Zamozza has a liquor licence, for some reason we were not given the bar menu which was quite odd and a first. As a result, we had to choose from a range of oversweet mocktails that were average.

Recommended for a quick, fuss-free bite if you work in the vicinity or are around for a spot of shopping but I would not go back just for the food.