Latest SmokeHouse Deli restaurant is not so hot

To be fair, the decor is different (to an extent), but that aside, the menu is quite dull and predictable.

You walk into a deli thinking of fresh produce, simple flavours and a fuss-free meal. The SmokeHouse Deli has always ticked the boxes when it comes to these parameters, but their latest restaurant, at the DLF Place mall Saket, seems a bit off-kilter.

Maybe the chef was having a bad day or maybe they don't really care too much because they are already an established brand, but we left with a sense that they just haven't taken care with either taste or appearance of dishes.

The concept behind the new restaurant is quaint; it is modeled on an English tea house and floral motifs are scattered across the space; the furniture is all wrought iron and you can imagine being in a smart tea house, but not just yet, since they don't have an exclusive tea time menu to do justice to the theme.

Given that this space is supposed to be a reinvented SmokeHouse Deli, you keep looking for the newness and come away disappointed.

To be fair, the decor is different (to an extent) and there are more vegetarian options on the menu than before, but that aside, the menu is quite dull and predictable.

I began with the assorted seafood fritters which were average. The batter was thick and the hero of the dish, the seafood , was not showcased.

The smoked chicken, caperberries salad with an orange vodka dressing had wilted lettuce and way too much dressing. I have eaten at their other branches several times in the past and have never dealt with poorly constructed salads so this was quite unexpected. The redeeming dish on the menu was the pumpkin broth with seafood and coconut and the grilled steak which was cooked to perfection. I ended my meal with the Philly and plum cheesecake which was strong on flavor and had a creamy texture, but the rest of the meal was sadly below par.

The portions at SmokeHouse Deli are generous with a view to promoting community-style eating and the staff was quite courteous, but it was the food that disappointed.

Also, given that it is constructed in a rather al fresco manner, you almost feel as though you are eating in a food court with shoppers peering in as they walk across the busy mall. 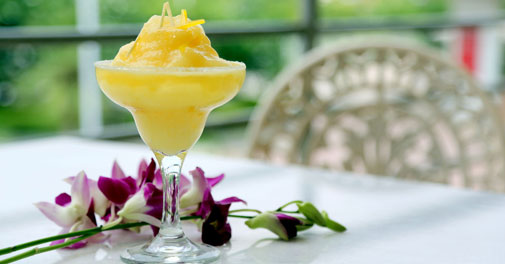 Mango and Ginger Margarita
Maybe we ordered the wrong dishes, maybe not, but the new SmokeHouse Deli left a lot to be desired. Once they have ironed out the initial chinks it might be worth going back to, even if just to sample their new tea menu and the British tea house ambience. Till then, I would rather visit one of their other outlets where I can be assured of quality and the taste of dishes.

Meal for two
Approximately Rs 2200 per couple plus taxes