Toshiba ultra HD 4K laptop: A revolution in the making?

Toshiba, the brand behind the world's first mass-market laptop computer in 1985, sought to make history again by launching an all-new range of laptops on Tuesday.

Standing tall among them was the Satellite P50, touted as the world's first Ultra HD 4K laptop, capable of providing image resolution that could even send Apple's much-hyped Retina Display tech skittering for cover.

Want more? The 15.6-inch touchscreen display on the P50 shows lifelike crystal-clear definition in a 3,840x2,160 resolution, which amounts to four times that of any Full HD screen. Consequently, what you get is smoother imagery, an astounding level of detail, and a beautiful experience with Mirror's Edge 2 - if that's what you are busying yourself with.

But hey, what's great screen resolution if it doesn't come with impressive sound? Well, this is one question you wouldn't have to fret about, given the fact that the Satellite P50 comes equipped with stereo speakers from the house of Harman Kardon. Need we say more?

But then, maybe you are more keen on your budget than screen resolution. Toshiba India country head Sanjay Warke, who launched the revolutionary laptop in Delhi with his colleague Sivakumar (vice President, Sales & Marketing, PC Business-DS Division), has an answer for that too.

"Every laptop of ours has been designed in accordance with the needs of the consumer, whether college student or IT professional," says Warke, adding that his firm holds the value-for-money factor sacrosanct. 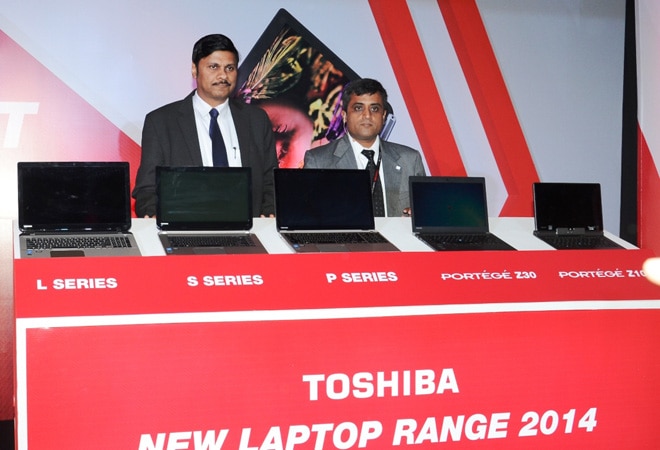 Sivakumar, on the other hand, says that his company is certainly not underestimating the digital needs of the new generation. "Indian consumers have come a long way from using laptops as simple performance machines; today, they see laptops as complete entertainment devices. We understand this at Toshiba, and to deliver an unparalleled sensory experience that's at the centre of their digital entertainment life, we have created products that offer great imagery as well as sound... With our new range, we deliver great value to cost-conscious customers and great technology to our more discerning customers."

Here are the technical specifications of some of the newly launched laptop series.

Satellite P Series
Besides being the world's first Ultra HD 4K laptop, the p50 also sports the distinction of a sleek design (at 27.9mm) and bold looks with a metallic finish. Encased in a slim chassis, it also features Toshiba's unique sleep-n-music feature, allowing users to take advantage of the high-quality speakers even when the laptop is off. Powered by 4th Gen Intel Core H series processors (47W) and a gaming-class AMD Radeon R9 M265X graphics, the P50 houses RAM expandability up to 16GB of 1600MHz DDR3L memory, along with a 1TB hard drive with (3D sensor) to store and share HD content. Four USB 3.0 ports, a UHS-II SD card slot, Wi-Fi to stream Ultra HD videos, HDMI port capable of 4K output and a built-in rewritable drive deliver complete connectivity options to the customers at a price of Rs 86,000.

Satellite S Series
With a sleek design at 19.3mm and weighing just 1.87 kg, the new Satellite S Series features a stylish brushed aluminium finish and a thinner-than-ever profile -- making it easy to carry and comfortable to use anywhere. The S series also boasts of excellent sound, emitted through high-fidelity Harman Kardon speakers for an exceptional audio experience. Powered by a 4th Gen Intel CoreTM i5-4200U Processor 1.6 GHz with Turbo Boost Technology 2.0 up to 2.6 GHz (3MB Cache) and a 4 GB DDR3L 1600 MHz RAM (expandable up to 16 GB), the S series runs on the Windows 8.1 OS. Housing a 1TB 5400 RPM SATA drive, the Satellite S Series laptops also feature a full array of ports for a variety of computing needs, including an HDMI port capable of 4K output, and dual USB 3.0 ports that allow users to charge USB-powered devices even when the laptop is turned off. The new Satellite S40 will be available at a price point of Rs 50,790.

Satellite L Series
The Satellite L series is designed to be taken anywhere, making it ideal for users who want a stylish laptop for work or entertainment. The distinctive look of the latest L Series is complemented by the fine sound emanating from its Onkyo speakers and a beautiful 15.6-inch HD Clear SuperView LED backlit screen. All the laptops in this series come installed with dual USB 3.0 ports, similar to the ones sported by their big brothers in the S series. The L series features 14 models with so many configurations, you are certain to find just the one you wanted from the nearest store. What's more, it come in three elegant colours - Premium Glossy Black, Luxury White and Satin Gold - and the entire range is priced between Rs 25,785 and Rs 51,340.

The Portege Z10t-A Ultrabook
Featuring a 11.6-inch IPS Full HD display with Corning Concore Glass and an anti-glare coating, the Portege Z10t-A provides the most comfortable handwriting experience available on a touch device. Its versatile usability optimized for productivity converts the Portege Z10t-A from an Ultrabook to a mobile computing device with a quick release lock. The detachable tablet features a full-size SD card slot, USB 3.0 and Micro HDMI port, and an audio combo jack. The keyboard dock features a full-size HDMI, RGB, LAN and USB 2.0 port. Designed for performance, the Portege Z10t-A is powered by the latest Intel Core processors and backed by a remarkable battery life. The detachable keyboard is LED backlit and spill-resistant, which includes a touchpad with Windows 8.1 gesture support and accupoint.

Also released were the Toshiba Detachable Hybrid Laptop, Satellite L30W; the Legendary Portege Z30-A; the Toshiba Thin and Light Tecra Z40-A; and the mighty Tecra W50, Toshiba's first professional workstation. So, if this doesn't spoil you for choices, we don't know what will. Have a bash!