Shares of Hero MotoCorp gained over 3 per cent today after the two-wheeler firm reported over two-fold rise in consolidated profit after tax for the quarter ended June 2022. Profit for Q1 stood at Rs 585.58 crore riding on higher sales against Rs 256.46 crore in the corresponding period of last fiscal. Hero MotoCorp stock gained 3.02 per cent intraday to Rs 2844.8 against the previous close of Rs 2,760. 90 on BSE.

Shares of Hero MotoCorp gained over 3 percent today after the two-wheeler firm reported a over two-fold rise in consolidated profit after tax for the quarter ended June 2022.  Profit for Q1 stood at Rs 585.58 crore riding on higher sales against Rs 256.46 crore in the corresponding period of last fiscal. Hero MotoCorp stock gained 3.02 per cent intraday to Rs 2844.8 against the previous close of Rs 2,760. 90 on BSE.

India's leading consumer durables company - Bajaj Electricals Limited today announced elevation of Anuj Poddar to the role of Managing Director (MD) and Chief Executive Officer (CEO). Anuj Poddar had joined the Company in late 2018 as its Executive Director. Shekhar Bajaj shall continue as Executive Chairman of the Company. This announcement comes on the back of the ongoing and significant transformation journey and keeping in mind the Company's long-term strategy. Over the last three years, Bajaj Electricals has undertaken multiple initiatives including strengthening of the leadership, streamlining of its corporate structure, turnaround of its performance and balance sheet and the planned demerger of the EPC business.

Shares of Life Insurance Corporation (LIC) of India gained over 3 per cent in early trade today after the insurer reported a multifold rise in standalone net profit for the quarter ended June 30.  Considering the stellar Q1 earnings, financial services firm Motilal Oswal has assigned a target price of Rs 830, a 22 per cent upside to the Friday's close of Rs 682.

Shares of Singer India locked in an upper circuit of 20 per cent on Tuesday amid a media report that Rakesh Jhunjhunwala's firm RARE Enterprises bought over a 10 per cent stake in the company through a bulk deal. The scrip jumped to Rs 69.15 against the previous close of Rs 57.65. However, the final data of bulk deals will come later in the day post-market hours.

Most of the shares in Rakesh Jhunjhunwala's portfolio were trading lower today following his sudden death on Sunday.  Aptech Ltd and Star Health fell up to 5 per cent in early trade. His portfolio comprised 32 stocks.

The stock was the top holding of the big bull in terms of value. Jhunjhunwala along with his wife Rekha owned shares worth Rs 11,086.9 crore with a stake of 5.10 per cent at the end of June quarter.

"On the technical front, Nifty formed a small bodied bullish candle on the daily charts  with minor upper and lower shadows. The trendline resistance adjoining the highs of Oct'21, Jan'22 and Apr'22 will be the immediate resistance zone on the higher side which is around 17,750 to 17,800. A fresh breakout above the said range can extend the present rally towards 18100-18150 levels. Likewise support base has now shifted higher to 17,350 to 17,300 range. Momentum oscillator though are trading in overbought price conditions, but no signs of exhaustion can be seen yet rather had been supportive with weekly RSI breached past the 6-months falling trend line. Market breadth has seen remarkable improvement, indicating broader market participation across sectors.  Classical theorist can claim that there has been a falling channel breakout and is likely to head higher towards the 17,900 levels as it is 80% retracement of entire decline off October 2021 to June low (18,600-15,200).  Thus, during the day Nifty is likely to open on a positive note and is expected to continue its positive momentum while maintaining higher high-low formation. Hence, intraday dip towards 17,560-17,615 can be the buying opportunity for target of 18,100."

"We are keen on opening this week with eyes set on 18200, but would remain watchful though on approach to 17835, the congestion point discussed on Friday. Inability to clear or float above the same after the initial burst could be seen as a sign of weakness setting in, but we would wait for push below 17660 before switching sides." 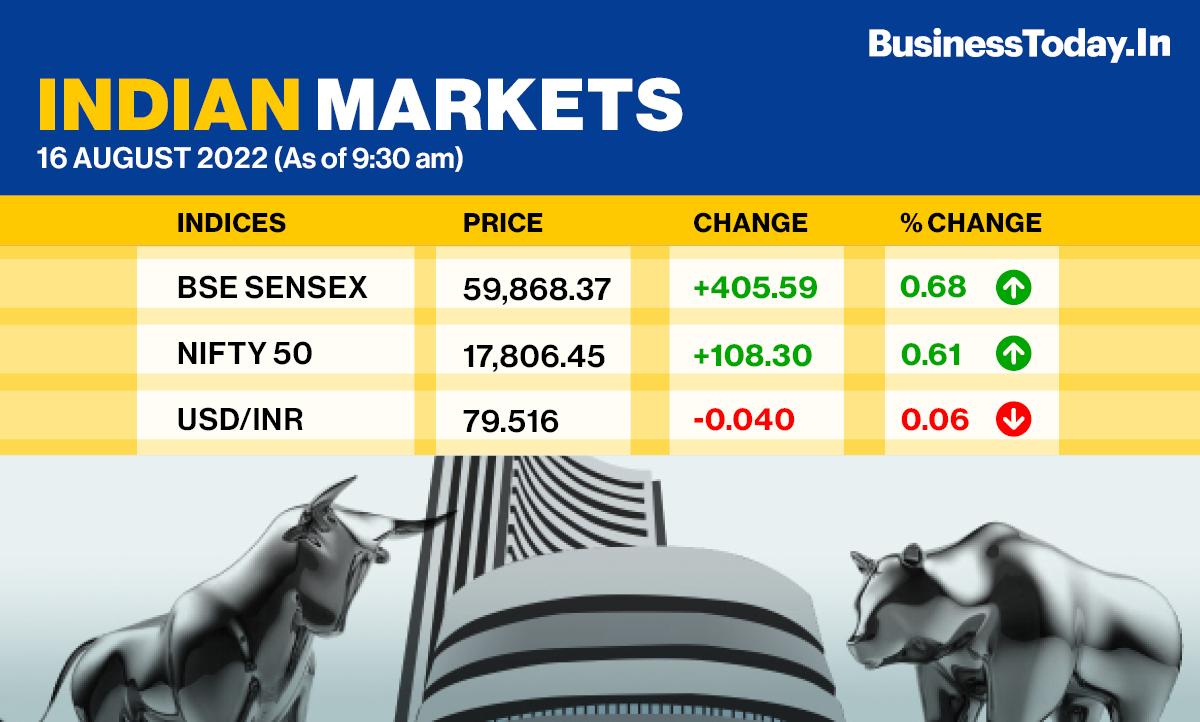 The Indian market is likely to open higher today as SGX Nifty rose 53 points to 17,838. The Singapore Stock Exchange is considered to be the first indication of the opening of the Indian market.

The stock market ended higher on Friday, led by positive global cues. Sensex rose 130 points to 59,462 and Nifty closed 40 points higher at 17,699. Of 30 Sensex stocks, 13 ended in the green. NTPC, Tata Steel and PowerGrid were the top Sensex gainers, rising up to 3.26 per cent. Infosys, Maruti Suzuki and L&T were the top Sensex losers, falling up to 1.56 per cent.