Sensex rises 390 points to 56,072 and Nifty gains 105 points to 16,710. Benchmark indices ended higher for the fifth straight session on Thursday led by a surge in capital goods and IT stocks.

Imported inflation in the form of rising crude and palm oil prices kept the market sentiment jittery during the June quarter. However, the initial financial results of India Inc. showed that at least 9 companies in the BSE 500 index managed to report over 100 per cent growth in net profit so far on a year-on-year basis. Shares of these companies have delivered a mixed return to investors since the beginning of the ongoing financial year-to-date. Going ahead, market watchers are bullish on a couple of stocks. READ MORE

UltraTech Cement, an Aditya Birla Group company, on Friday reported 6.9 per cent year-on-year (YoY) decline in consolidated net profit at Rs 1,584 crore for the quarter ending 30 June, 2022. The company had reported a net profit of Rs 1703 crore in the year-ago period.

The Indian rupee has been touching new lows against the US dollar in the last few months. In calendar year 2022, it has depreciated by over 6 per cent. In an annual banking conference organised by the Bank of Baroda, RBI Governor Shaktikanta Das has put up a strong defence. Let's look at each of the points he made.

Stronger currencies, too, are depreciating

The spillover from the global monetary tightening has been impacting all the currencies. The historically high inflation in the US has been pushing the interest rates up. "Even the Japanese Yen, the Euro and British Pound Sterling have not been spared," said Das. In fact, foreign portfolio investors are also moving to safe haven assets.

Das has listed strong domestic financials and macros as a reason for the rupee holding up well against the US dollar as compared to most advanced and emerging market peers. Das said the current account deficit is modest. Inflation is stabilising. Financial system is well capitalised and sound. External debt to GDP is declining. And forex reserves are also at an adequate level.

Shares of JSW Energy gained over 6 per cent today after the firm reported a 179 per cent rise in net profit for the June quarter. Net profit rose to Rs 560 crore in Q1, on the back of higher revenues.

Profit after tax for the corresponding quarter of the previous fiscal stood at Rs 201 crore.

Kotak Bank, Titan and HDFC Bank are the top Sensex gainers, rising up to 1.73 per cent.

10:50 am: Reliance Industries shares trading flat ahead of Q1 earnings

Shares of Reliance Industries Ltd (RIL) were trading flat ahead of its Q1 earnings set to be announced today.  RIL is likely to report strong earnings growth on both year-on-year (YoY) and quarter on quarter (Q-o-Q) basis. The Mukesh Ambani-led firm is likely to report stronger refining profitability, along with continued improvement in telecom average revenue per user (ARPU). 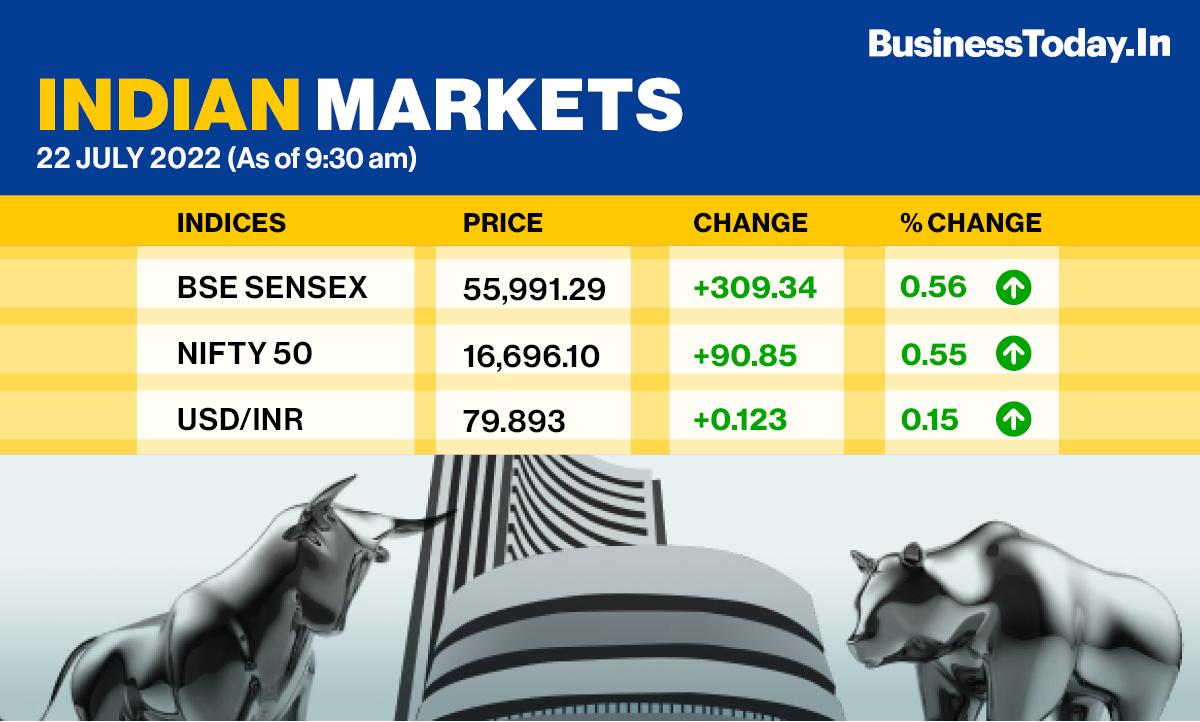 "Technically, on daily charts, Nifty has formed a bullish candle and closed above the 100-day SMA (Simple Moving Average), which is broadly positive. For traders, 16,500 would act as a key support level and above which the index could move up to 16,700-16,750. On the flip side, strong possibility of a quick short-term correction is not ruled out, if the index trades below 16,500. Below the same, the index could slip till 16,450-16,420." The Indian market is likely to open flat today as SGX Nifty rose 9 points to 16,626. The Singapore Stock Exchange is considered to be the first indication of the opening of the Indian market.

Benchmark indices ended higher for the fifth straight session on Thursday led by a surge in capital goods and IT stocks. Sensex rose 284 points to 55,681 and Nifty ended 89 points higher at 16,610. In the last five sessions, market cap of BSE-listed firms has risen by Rs 9.81 lakh crore to Rs 260.46 lakh crore against Rs 250.65 lakh crore on July 14.