Rough economic weather has taken a toll on the wealth of households across the globe, including India.

Between mid-2011 and mid-2012 , the wealth of Indian households has gone down by $700 billion (around Rs 35 lakh crore). Globally, the total household wealth has declined by 5.2% to $223 trillion during the period, according to the third annual Global Wealth Report 2012 released by the Credit Suisse Research Institute. 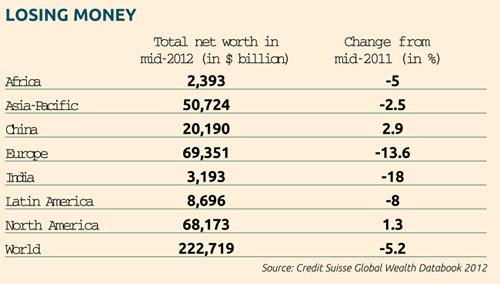 The report says the number of millionaires worldwide will increase by about 18 million reaching 46 million in 2017.

China will add a total of $18 trillion of wealth during the period, surpassing Japan as the second wealthiest country in the world. Wealth per adult in China has grown robustly since 2000, more than tripling from $6,000 to $20,500 in 2011.