Yashwant Sinha , former minister of finance and external affairs, calls himself a detatched observer of developments in government. He spends most of his time in his erstwhile constituency Hazaribagh, which is now represented by his son and Minister of State for Finance Jayant Sinha, and when in the capital stays in his home on the outskirts of Delhi. He told Business Today that the Narendra Modi government is taking forward the agenda set by the earlier NDA government. Excerpts from an interview:

BT: Is the Indian economy on the right track?

Sinha: So far, yes. But more needs to be done, and quickly, for reviving the investment cycle.

BT: Do you think in the past year industry's confidence in the government has improved?

Sinha: That is one big thing the last Lok Sabha polls did. As far as confidence is concerned, it stood completely destroyed. It came back with a bang after Mr Modi got elected. Especially, a government with full majority brought confidence back fully. There is no doubt that confidence is back.

BT: What kind of signals are you getting from industry?

Sinha: Before the elections, when people used to ask me, how much time it would require to turn the economy around I used to say it would take at least 24 months. Now 12 months have passed, and the impatient are asking these questions loudly now, why this hasn't happened, that hasn't happened. I think, return of confidence and improvement of sentiment was fine.. The hype that things will improve within six months or one year is clearly misplaced. Anyone who understands the dynamics of the Indian economy and the global situation knows that nothing less than 24 months are needed to make things happen. We have moved along, a lot of things have happened, but a lot remains to be done. The Economic Survey says projects worth Rs 9 lakh crore are stuck at various levels. I see it on the ground. We, in our (Atal Bihari Vajpayee-led NDA government) time, sanctioned a four-lane highway connecting Ranchi with my constituency of Hazaribagh; one part of which is built, the other got held up because the person who got this contract, got involved in the coal scam. So he walked out. I kept pursuing it with the UPA government when the project got stalled. Twelve months down the line nothing has happened, it is where it was.

BT: This is what many are saying, there are big announcements, big plans, but action on ground is missing?

Sinha: We have to understand the complexity of the situation. Take, for example, the much-publicised Jan-Dhan Yojana. I was reading a report somewhere that 70 per cent bank accounts have zero balance, but then DBT (direct benefit transfer) has yet not taken off. Once this scheme takes off, and the government moves its cash dole through these accounts, there will be money in these accounts. Any impatience at this time may not be fully warranted, but there is impatience, whether we like it or not. 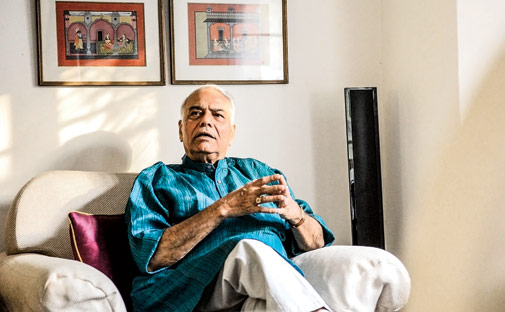 'I will not go by appellations of new right, new left or new centre. No government in India can afford not to be pro-poor'
BT: It appears that the government is keen to restructure the RBI in a way that will reduce its powers. How will that affect the equation between the finance ministry and the RBI?

Sinha: There is no question of confrontation with the RBI, especially in the scope of work which is clearly demarcated. Where was Raghuram Rajan before his posting as the RBI governor? He was the chief economic advisor in the finance ministry, which means he is not an outsider. He understands the compulsions of the government. When I was finance minister, and Bimal Jalan was the governor, we never had any problem. I used to consult him on several issues outside the domain of the RBI because of his vast experience. Similarly, when he had to take a call on monetary policy he often consulted me informally. We worked as a team.

Sinha: Yes, it does. But we should do it in consultation with the RBI. Let us not forget that the original proposal for this came from the RBI itself.

BT: Is it the right time for capital account convertibility?

Sinha: No, the time is not right. We are not yet ready for this. There are some pre-requisites that need to be met before we go the whole hog. The first is inflation. When I left the finance ministry, I thought the ghost of inflation was finally buried. Inflation was at developed countries' level. But I was wrong. Inflation came back to haunt us.

Fourth, and very importantly, is how our own people, resident Indians, are going to behave. Earlier events show that some foreign currency crises in Latin American countries, Brazil or Argentina or even in Russia were largely engineered by citizens taking their money out. In our case in 1991, the NRIs added to the crisis by taking their money out. Whenever a little window for furthering the cause of convertibility was available we used it fully. There is already full convertibility on the current account. Only on the capital account that we have restrictions. Therefore, as far as this time is concerned, or the next few years, I do not see any good coming out from full convertibility.

Who would not like the rupee to be so strong that it could be freely traded without the danger of excessive devaluation? But as I said, certain conditions must be met. We have hastened slowly, against the Washington consensus.

Earlier, the IMF was critical of India for being very conservative on this issue. After the East Asian currency crisis, and the US subprime crisis, they have seen the merit of our logic of hastening slowly.

In my five budgets, I carried forward the reforms in the foreign exchange market, and allowed several things which were forbidden earlier. Today there is huge FII, HNI investments in our stock markets. The relationship between the stock and foreign exchange markets has become critical. It was not there earlier. It was not there in 1991, for instance. The worst fear for any finance minister in a country like India is, any run like this in the stock market might affect the foreign exchange market. A fine balance has to be maintained between the two, if we want to maintain confidence. In a modern economy sentiment at times matters more than even the fundamentals of the economy.

There is nothing wrong in saying that full convertibility is a desirable goal, but the timing is an open question. My recommendation will be the new theology of hastening slowly. The Indian model is much appreciated globally today than before and that is the path we should continue to follow. 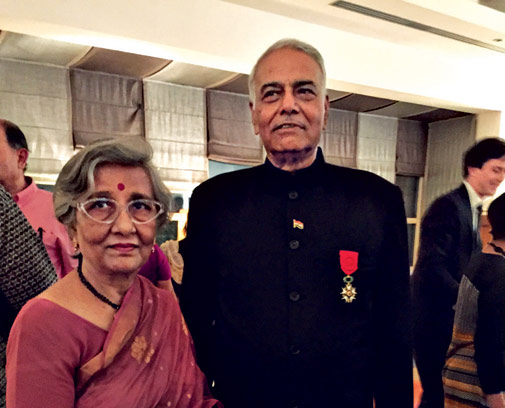 In April, Yashwant Sinha received the highest French civilian award, the Officer of the Legion of Honour, in recognition of the work he did as finance and foreign minister in the Vajpayee government and also for the work he did as chairman of the Indo-French Parliamentary Friendship Group during the last Lok Sabha. Sinha received the award from the French Ambassador to India Francois Richier.
BT: The government is moving between socialism, capitalism, right of centre. There are pro-poor policies like Jan-Dhan Yojna. On the other hand, they are pushing pension, real estate reforms. Your former colleague Arun Shourie said in an interview (to our sister channel Headlines Today) that the economic policy of this government is directionless. How do you define this new right economics?

Sinha: I will not go by appellations of new right, new left or new centre. No government in India can afford not to be pro-poor. There is just no way any government in this country can project itself to be neutral on the question of poverty or of the poor. This government is equally claiming to be pro-poor. Then there is a famous saying of (finance minister) Arun Jaitley, that being pro-corporate does not mean being anti-poor. They are trying to build this synthesis. Why are they building this synthesis? I am not trying to be an advocate to this government, I need not. The point here is, you cannot tackle poverty in this country without growth. Every government will vouch to be pro-poor. No government can say that it will try to resolve this issue of poverty without growth. We tried it for 40 years, and failed. The second is, do you want to solve the problem of poverty through doles and consumption-led growth or through investment-led growth?

In the Vajpayee era, we went for investment-led growth, that's why we launched the entire highway project, telecom reforms, rural roads scheme, ports and housing schemes. Everything was aimed at triggering consumption of investment goods. The idea was that investment-led growth will automatically lead to consumption. People will earn and consume. It would lead to creation of jobs, of durable assets and reduce the transaction cost in the economy. Better railway services, good roads, along with comfortable interest rates reduced the transaction cost in the economy. That's why the economy took off.

What happened during the UPA regime? They turned this around into consumption-led growth, especially after the subprime crisis. You will find that all the money was spent on consumption, very little for investment. This created all the problems. Ultimately growth came down drastically, because this line of approach could not last long. You are bound to have high inflation and low growth in dole-led, consumption-led growth. In investment-led growth, you will have consumption following investment and growth will be sustainable.

This government is following the same principle we followed in the Vajpayee era. The emphasis is to go for investment, and then do what you can do with fiscal prudence, so that inflation moderates and interest rates come down.

BT: There is a sense that the NDA government is getting stuck in the cobweb of politics, especially they handled the land bill or real estate bill or GST?

Sinha: Out of the ordinances issued only the land acquisition bill is pending. And from the information I am gathering, the real estate bill may be referred to the select committee.

BT: Do you think the government could not communicate well on the land bill and the Opposition seized an opportunity to regain the rural base?

Sinha: It is too early to reach such conclusions. You can't say that because of the land acquisition bill, we lost elections in urban Delhi. I give you another example. In my erstwhile constituency, a large area was being acquired by NTPC for coal mining. The local Congress MLA - now his wife is an MLA - opposed this. During the UPA regime they could not convince him. Now the compensation has been raised, from Rs 15 lakh per acre to Rs 20 lakh, and he is not opposing it any more. The issue has been settled without waiting for the land bill to be cleared. It is not fair to say that the peasants are turning against the BJP because of the bill. It will be a hasty conclusion. I agree with the view that like the labour laws we should encourage the states to have their own land acquisition acts. That will create competition among the states.