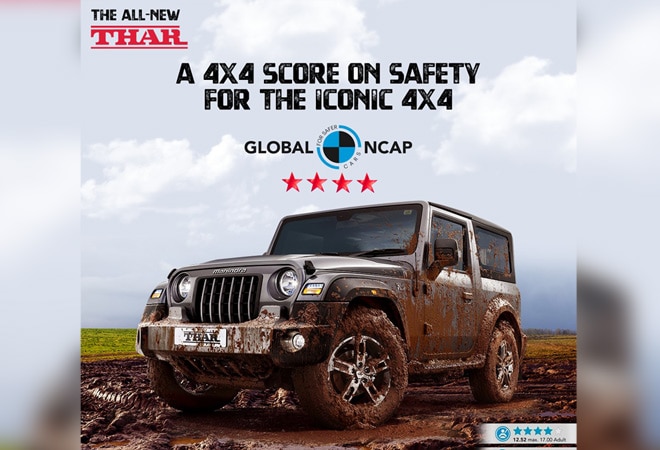 Mahindra & Mahindra has yet again achieved a 4-star result for their new Thar SUV in the car crash test conducted by Global NCAP . The car has also scored four stars on the aspect of child safety, making Mahindra Thar one of the safest cars available in India. Of all other Indian-made cars to have taken the test before Thar, only Mahindra's XUV300 had received four stars for child occupant protection.

The new Thar was tested with its standard safety equipment of dual airbags and Anti-lock Braking System (ABS); the frontal test displayed adequate protection for the head, neck, as well as the chest  area for adult crash test dummies. For the side-impact protection Test, the SUV managed to meet the UN 95 regulation.

Anand Mahindra, the chairman of Mahindra Group, claimed on Twitter that the Thar is "the safest off-roader in India". He also dedicated this achievement to the Make in India movement, saying that it is second to none.

On the aspect of child occupant protection, the automobile came close to achieving a 5-star rating; the test showed nearly 100 per cent protection for child occupants. The significant development here is that for the score to be deemed legitimate, Mahindra must offer this configuration as standard; the variant with side facing seats without seat belts has been discontinued.

The Thar is the fourth Mahindra-made vehicle to be tested by Global NCAP under its 'Safer Cars for India' programme. The Scorpio, tested in 2016 had received a zero-star rating; the Marazzo in 2018 received 4 stars; and the XUV300 got 5 stars in January 2020, holding the highest aggregate score for any Indian vehicle.

Mahindra now has India's safest MPV, safest off-roader and safest overall car under its belt. David Ward, President, Towards Zero Foundation and Global NCAP said, "It is very satisfying to see this growing vehicle safety trend in the Indian car market, which combines minimum regulatory requirements with the purchasing power of informed consumers, helping to drive demand for ever safer vehicles."

The only other cars from India having achieved 5 stars, apart from the XUV300, are Tata Altroz and Nexon; other 4-star scores have been awarded to the Maruti Suzuki Vitara Brezza, Tata Tiago/Tigor and Zest, Toyota Etios Liva and Volkswagen Polo.

Why BSNL is the biggest victim of AatmaNirbhar Bharat