Mahindra's latest off-roader Thar, launched in India on October 2, has received good response from the market with bookings of over 20,000 units and a waiting period stretching up to seven months 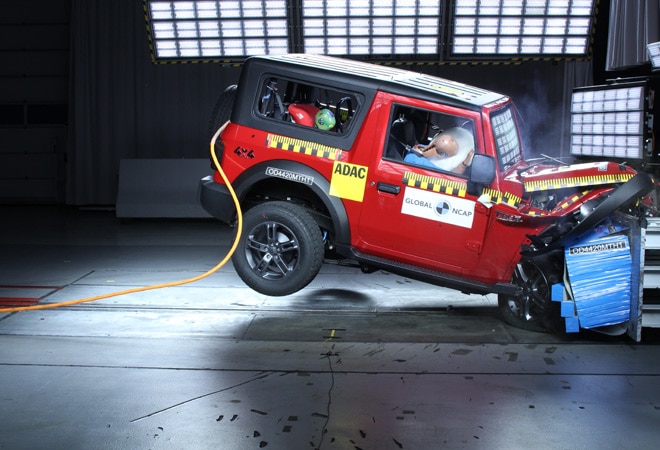 The results that may surprise a few prove Thar is safer and more stable in its construction than the more fancied and seemingly sophisticated Kia Seltos, which could score only three stars in the same test. A score of 12.52 out of a maximum 17 in adult safety makes the Thar the fourth safest car in India behind the Mahindra XUV3OO, Tata Altroz and Nexon which are all five-star rated cars. Its score of 41.11 out of a maximum 49 for child safety makes it the safest in that aspect. In contrast, the Seltos, which costs almost as much as the Thar, scored just 8.03 for adult safety and 15 for child safety.

The vehicle that was launched in India on October 2 and has received good response from the market with bookings of over 20,000 units and a waiting period stretching up to seven months, was tested in its basic safety specification and was equipped with two airbags. It also met the side impact UN 95 regulation.

"Mahindra's commitment to safer cars is once again displayed for consumers and shows that it is possible to offer good safety performance in the Indian market," says Alejandro Furas, Secretary General of Global NCA. "It is encouraging to see manufacturers that also offer high levels of protection for children travelling in their vehicles. The Thar demonstrates the capacity of Mahindra to improve its fleet safety."

Global NCAP found the car offered good protection to the head and neck of the driver and passenger at the front. Driver's chest offered adequate protection and passenger's chest showed good protection. The structure was rated as stable but the footwell area was rated as unstable, not being capable of withstanding further loadings. Both adult knee areas were optimised to reduce significant injuries. Both child occupants received almost full protection during the test. The Thar offers standard ISOFIX anchorages and top tether together with three-point belts for all seating positions.

"This is another good result for Mahindra which shows the manufacturer's commitment to safety. It is very satisfying to see this growing vehicle safety trend in the Indian car market, which combines minimum regulatory requirements with the purchasing power of #SaferCarsforIndia informed consumers, helping to drive demand for ever safer vehicles," says David Ward, President of the Towards Zero Foundation.

Global NCAP tested Thar's ESC according to UN regulation. ESC is not fitted as standard on the Thar and although the model met minimum regulatory requirements, the car showed an unstable dynamic behaviour. Global NCAP recommends a review and improvement.

"This is a proud moment for Mahindra as the 4-star rating for the All-New Thar reiterates our unstinted commitment towards safety. It has achieved a robust GNCAP 4-Star rating, which is a first in its segment with highest points in child safety amongst all cars tested by Global NCAP so far," says Velusamy R, Chief of Global Product Development, Automotive Division, M&M Ltd. "The All-New Thar is designed keeping the safety of our customers as the top-most priority, including Adult & Child safety. In fact, the entire safety simulation and development of the All-New Thar was done at Mahindra Research Valley, Chennai. I am sure that this recognition will further make it a popular choice amongst our consumers."

Global NCAP first grabbed headlines in India on the eve of the biennial Delhi motor show in January 2014 when it tested five Indian cars. All of them - Tata Nano, Maruti Alto 800, Hyundai i10, Ford Figo and Volkswagen Polo - fared miserably and scored a zero. Since then, it has given heartburn to Indian car companies on numerous occasions.

So far 42 cars across 28 brands have been crash-tested in India. The overall results are far from flattering. An overwhelming 20 cars have scored zero star, two have scored one star, four cars scored two stars, five cars have three stars and eight including the new Thar, have scored four stars. The Tata Nexon compact SUV, the Altroz premium hatchback that was launched in India earlier this year and the Mahindra XUV3OO are the only three cars to have scored the maximum five stars till date in India.