Nissan Magnite goes head to head with the likes of Maruti Brezza, Hyundai Venue, Kia Sonet and Tata Nexon. It significantly undercuts competition with the nearest rival priced at Rs 6.7 lakh and above 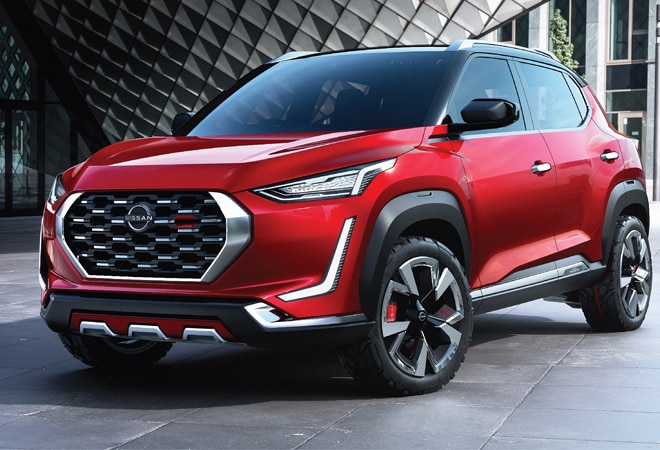 Magnite comes with over 20 first-in-class and best-in-segment features, claims Nissan

Japanese automobile major Nissan India on Wednesday launched its make or break product -- the compact SUV Magnite at an aggressive introductory price of Rs 5 lakh. Available in 10 variants spread over two engine options and manual and automatic gearboxes, the price tops out at Rs 9.35 lakh. The introductory price at the entry level will be valid only till the end of this year. "The all-new Nissan Magnite marks the beginning of a new chapter in the Nissan NEXT strategy for both the Indian and global market. Built on the philosophy of 'Make in India, Make for the World', the all-new Nissan Magnite comes with more than 20 first-in-class and best-in-segment features that provides consumers with a differentiated, innovative and accessible ownership experience," said Sinan Ozkok, President, Nissan Motor India.

In a fast growing yet highly competitive segment, Magnite goes head to head with the likes of Maruti Brezza, Hyundai Venue, Kia Sonet and Tata Nexon. It significantly undercuts competition with the nearest rival priced at Rs 6.7 lakh and above.

"With the launch of the all-new Nissan Magnite, Nissan has reached a memorable milestone in its customer-centric journey for the Indian market. Specifically for our discerning Indian customers, we are offering the big, bold, beautiful and 'carismatic' SUV at a special introductory price. We believe that the all-new Nissan Magnite will be a disruptive game changer that is high on technology and aspirations," said Rakesh Srivastava, Managing Director, Nissan Motor India.

The car gets a 1 litre turbocharged petrol engine as also a naturally aspirated motor of the same size. The turbocharged engine -- HRA0 1.0-litre Turbo -- delivers a maximum power of 100PS and torque of 160Nm. Nissan claims a fuel economy of 20 kpl. It is available with manual 5 speed and X-TRONIC CVT gearbox variants.

The other engine -- B4D -- has a maximum power output of 72 PS and torque of 92 Nm, and is paired with only 5 speed manual transmission. There is no diesel engine being offered with the car as per Renault-Nissan's decision to phase out all diesel powertrains in the BS VI emission regime. Beyond its existing rivals, Magnite is expected to receive tough competition from alliance partners Kiger SUV, which is built on the same platform and will hit the roads early next year.