Bringing back the iconic Safari brand after its launch way back in 1998, homegrown automaker Tata Motors on Monday launched a renewed version of Safari. The new Tata Safari has been launched at a starting price of Rs 14.69 lakh (ex-showroom, Delhi) and will be a direct rival to the likes of MG Hector Plus and the upcoming Hyundai Creta seven-seater.

N Chandrasekaran, Chairman of Tata Sons, while launching the new Safari, said the Safari "has been designed with full-on comfort, convenience".

The 2021 Safari is essentially a 3-row version of the Tata Harrier and was first revealed as the Buzzard concept at the 2019 Geneva Motor Show, followed by an India reveal of a pre-production concept named Gravitas at the 2020 Auto Expo. The new model misses out on ladder frame construction and 4x4 hardware, something which the good old Safari had on offer.

Shailesh Chandra, President (Passenger Vehicles Business), Tata Motors, said, "The Tata Safari has had a long legacy in India, with several important updates over the years. With the new Safari, the company is kicking things a notch higher offering modern features and premiumness, while maintaining its legacy." 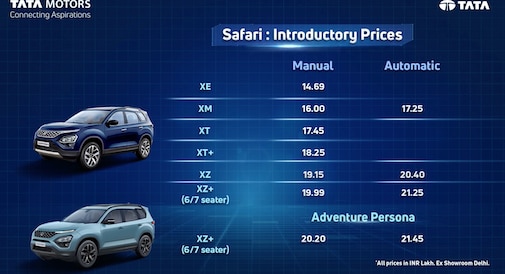 On the inside, the new Safari features a familiar semi-digital instrument console as found on the Harrier and an 8.8-inch touch screen infotainment system.

On the front, it has a redesigned bumper. The split headlamp is there but with LED. At the rear, the SUV comprises design elements such as wraparound LED taillights with a signature pattern, skid plate, and gloss-back finish on the tailgate.

Based on the Land Rover derived OMEGARC platform, the new Safari is 63mm longer than the Harrier and 80mm taller to accommodate the third-row seat. It also borrows the 168hp, 2.0-litre Kryotec turbo-diesel engine from the Harrier, along with its six-speed manual and six-speed automatic gearbox options.