An improvement in exports to the US, the key market for Indian drug manufacturers, drove the growth in overall exports from India Exports of the drugs and pharmaceuticals to the US grew sharply by 23.8 per cent to $3.42 billion during the first six months of financial year 2019-20. This was the second highest export growth to the country during April-September 2019 in the past five years, which led to a double-digit growth of 10.3 per cent.

An improvement in exports to the US, the key market for Indian drug manufacturers, drove the growth in overall exports from India, although it was around 2 percentage points lower than the growth registered in the corresponding period previous fiscal. Exports growth of the drugs and pharmaceuticals entered a negative territory during the H1FY17 and H1FY18 after a 9.9 per cent increase in H1FY16 when the US exports reached its peak at 29.5 per cent. 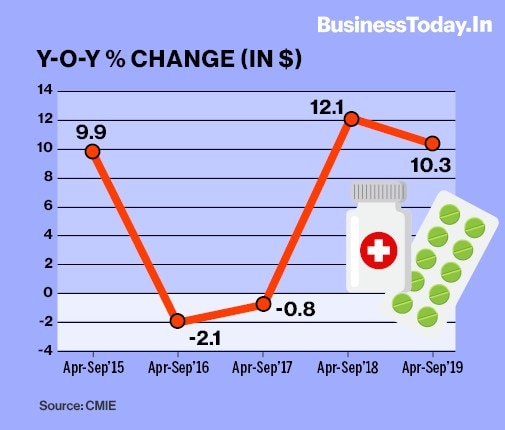 On a year-on-year basis, during April-September 2019, the months of May, June and July witnessed 10 per cent growth in drugs and pharmaceuticals exports. The month of August was the only outlier with a decline of 0.2 per cent, while the remaining two months registered a single-digit growth. According to CMIE, the growth in exports was on account of easing pricing pressure and new drug launches. While companies continued to face pricing pressure in the US generics market due to increased competition and higher abbreviated new drug approvals (ANDAs), the pressure remained in low single digits as channel and distribution partners in the US are consolidating, industry players informed. 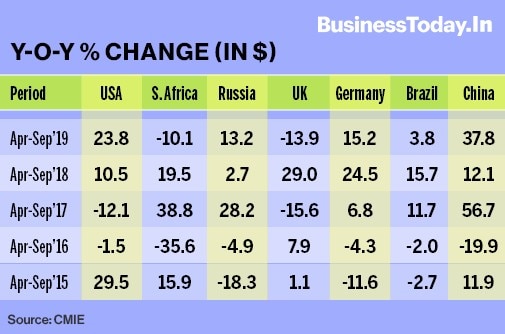 Along with the US, which solely accounts for one-third of India's drugs and pharmaceuticals exports, traction was also visible in emerging markets and China. Exports to China increased by a sharp 37.8 per cent from 12.1 per cent increase during April-September 2018. Exports to Russia, the third-largest market for Indian drugs with a share of 2.7 per cent, increased by 13.2 per cent to $2.73 billion during April-September 2019. It grew around 3 per cent in the corresponding period last fiscal. ALSO READ:Indian pharmas account for over half of US FDA 'warning letters' this year