Airtel vs Reliance Jio: Your broadband internet prices can see a massive drop

Bharti Airtel and Reliance Jio are taking the tariff war to the next frontier - broadband. 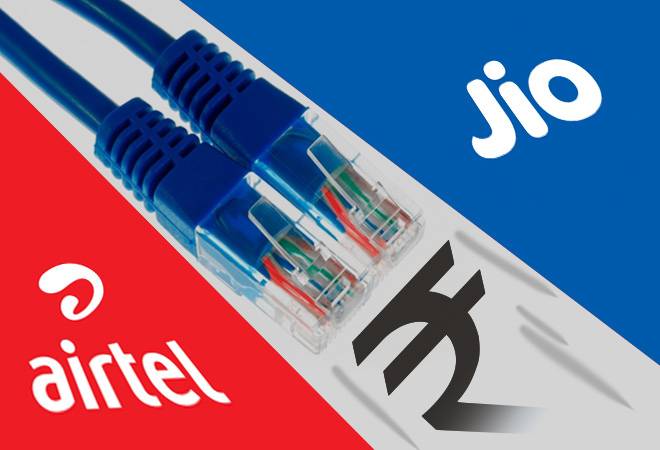 Taking the telecom war to the next frontier - broadband - Reliance Jio is sprucing up its arsenal. That definitely has the industry leader, Bharti Airtel, worried. Reliance Jio is set to launch its fibre-to-the-home (FTTH) later this year and from the looks of it the two telecom majors are going to engage in a new price war. Reliance Jio that released its disruptive pricing in 2016 and made a fortune out of it will be looking to replicate the same model for broadband. Does this mean that your broadband prices are going to see a massive drop? Very likely.

The Mukesh Ambani-owned 4G carrier is now set to offer a combination of speedy broadband connectivity with data speed of 100 mbps along with a lot of free data, videos and unlimited voice calls through Vo-IP (voice over internet protocol) for Rs 1,000-Rs 1,500 a month. However, industry experts believe that Reliance Jio could be offering this package for free initially as it is starting off in many cities and would want to attract more customers.

According to a report in The Economic Times, Reliance Jio might reveal its launch date for FTTH during Reliance Industries' annual general meeting on July 5.

A senior Bharti Airtel executive told the daily that they are keeping an eye on Reliance Jio's developments and will "do whatever it takes" to stay in the game.

Bharti Airtel is beefing up for this war by setting aside a chunk of its Rs 24,000-crore capex guidance for FY19 for expansion. The company currently has its broadband presence in 89 cities, which they are planning to expand to 100, with a primary target of big data consumption zones. It also has plans to connect 10 million homes by FY21, which should boil down to around 3 to 5 million new home service customers.

To counter Reliance Jio's offers, Airtel, too is offering packages at attractive rates. The company also rolled out 15% and 20% discounts on its home broadband packs for customers opting for 6 months and 1 year respectively. Moreover, Airtel will soon commercially roll out its entire spectrum of services under its 'Home Platform'. Airtel's customers will likely be able to connect their Airtel postpaid mobile, Airtel digital TV connections with their broadband and put them together under one bill. According to the report, they may also additionally offer antivirus tools and surveillance solutions.

Vodafone may get caught in the regulatory cobweb in India again