The fourth largest bank by assets in the country has been aggressive in providing banking services in the hinterland.

The state-owned Punjab National Bank (PNB) has taken the digital highway to reach out to the financially excluded - all thanks to the use of cost-effective e-KYC, Aadhaar-enabled payment system (AePS), online loan-tracking system and data analytics to predict defaults or frauds.

It is banking big time on AePS, through locations peopled by BCs. The bank has upgraded to a more user-friendly "online loan application and tracking system". In line with the government's 59-minute loan initiative, it has opened a Web portal where MSMEs can apply for loans of Rs 1 lakh to Rs 1 crore and get approval in principle within 59 minutes. "The approval is translated into actual business by the branches within the shortest possible time," says Sunil Mehta, Managing Director and CEO, PNB. Rajesh Kumar, Senior Vice President, Elara Capital, who tracks PNB closely, says the bank has developed an algo-based decision-making system in collaboration with a fintech firm for MSME loans to predict delinquencies. This will help PNB reduce credit losses.

"During the last one year, the bank has focussed on an inclusive business model. We have expanded outreach by deploying more BCs. We are aggressively pushing mobile banking as most rural residents have a mobile. Providing services through QR code, opening accounts on tap, AePS, and PNB One among the rural population have been the key structural changes in our business model to promote financial inclusion," says Mehta. PNB was adjudged the top bank in Financial Inclusion in BT-KPMG Study.

Still, amid this full-throttle technology push, PNB has not lost sight of the core. Its financial inclusion drive involves opening branches and outlets in aspirational, even Naxal-affected, areas. PNB's huge network of rural and semi-urban branches and BCs had helped it open 18.9 million accounts under the Pradhan Mantri Jan Dhan Yojana (PMJDY) as of December 2018, and ensured that its team of over 8,000 BCs reaches the right segment and helps them avail of relevant products and schemes. The bank organised 2,917 financial literacy camps in 2017/18 for over 200,000 customers.

One important aspect of "banking for the unbanked" is providing credit to those in need. Mehta says their system keeps track of PMJDY accounts to determine their eligibility for loan in the form of overdraft. PNB also collects leads through BCs to provide credit facilities via retail loans, Kisan Credit Card, Mudra Yojana, Kalyani Card, General Credit Card, and more.

According to its 2017/18 annual report, credit to the MSME sector stood at Rs 86,899 crore in March 2018, with YoY growth of 6.50 per cent over March 2017. The advances to micro and small enterprises came in at Rs 72,246 crore with YoY growth of 8.89 per cent. In 2017/18, PNB sanctioned Rs 6,837 crore Mudra loans as against the budgeted Rs 7,950 crore. According to the annual report, PNB has 414 MSME credit-growth initiative branches with a goal to reduce the turnaround time to two-four weeks and grow the MSME portfolio by 30 per cent on a YoY basis. The bank has identified 205 clusters to give focussed attention to the MSME sector. 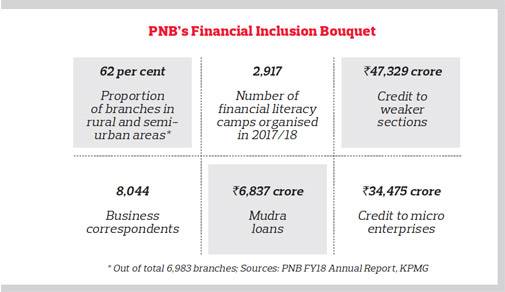 Financial inclusion is not a viable business proposition for most banks, but PNB is well placed. It does incur some cost on opening and maintaining no-frill accounts with zero balance and issuing RuPay cards. Its stand-alone operations by BCs are also not profitable. But Mehta says one must look at financial inclusion holistically as it helps them grow deposits and customer base. "All the deposits in these accounts add to our CASA deposit growth and provide a wider customer base for cross-selling other products," says Mehta.

According to the FY18 annual report, PNB's CASA (Rs 2,63,247 crore) share was the highest among all public sector lenders at 43.85 per cent. Cost of deposits declined from 5.33 per cent in 2016/17 to 4.96 per cent in 2017/18. PNB reported a profit in the December quarter of FY19 after three quarters of losses. "PNB would have comfortable core capital by the end of FY20 with recent equity capital infusion by the government, sale of non-core assets and monetisation of real estate," says Kumar of Elara.

A.K. Prabhakar, Head of Research, IDBI Capital, says financial inclusion is positive for the economy in the long term and banks in particular, because it leads to opening of more accounts. "With PNB being the second-largest networked bank after SBI, it will enjoy an edge among other PSBs as it moves forward on its financial inclusion drive."

When asked how PNB would stay ahead in a market crowded by payments banks, small finance banks and microfinance institutions, Mehta said being a pan-India bank spanning the length and breadth of the nation allows PNB to achieve cost synergies, which most NBFCs, MFIs and fintech companies will find hard to match.