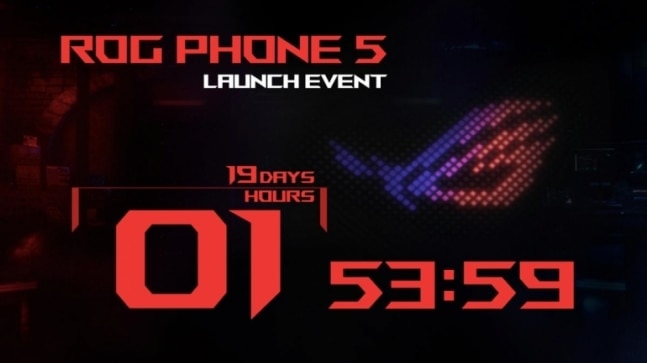 Asus ROG Phone 5 launch is set for March 10. The Taiwanese company has finally chosen date after a round of rumours and leaks that majorly pointed out this gaming phone will be called ROG Phone 5 and not 4. The ROG Phone 5 will be this year's flagship from Asus but more than being the top-class phone, it will be a gaming phone. Last year, Asus tried to entice some non-gamers with a less flashy design but this year, rumours have suggested, there will be a major change.

Several renders on TENAA certification website and a couple of hands-on images have confirmed the ROG Phone 5 will have a matrix display on the back. The ROG logo seems to have been moved to the bottom left corner. The RGB lighting is said to be still intact but it will now be placed under the secondary display. This matrix display could be useful in showing alerts, notifications, and announcements from various games. This design could prove to be utilitarian enough to lure more customers, ones who do not necessarily want a gaming phone.

Asus ROG Phone 5 will be powered by a Qualcomm Snapdragon 888 processor, which means there will be top-class performance available on the phone. There will be Android 11 software with the ROG UI skin on top, which facilitates high-end gaming on the phone. But more than the hardware, there will be several small hardware additions, such as triggers, dual charging ports, a large chamber or vent for cooling, and dual or quad speakers. The photos have shown the ROG Phone 5 may come with these features.

As per the listing on the TENAA certification website, the Asus ROG Phone 5 will come with a 6.78-inch AMOLED display, 5G connectivity, a dual-cell 6000mAh battery with maybe 65W fast charging, and 8GB and 16GB RAM options under the hood. But that is it. The rest of the specifications of the Asus ROG Phone 5 are not available right now. But it is possible Asus teases them during the time it has got before the launch date.

The Asus ROG Phone 5 was also rumoured to come to India in March. The launch date is not confirmed right now but since the Taiwan launch is taking place on March 10, the India launch should not be too far. The ROG Phone 3 was launched for Rs 49,999 onwards in India, which means the ROG Phone 5 cost will be in the ballpark.

Asus has confirmed the ROG Phone 5 launch event will begin at 7 pm local time in Taiwan, which means 4.30 pm IST.

iPhone XS falls in sea, man jumps into ice-cold water to save it