Reports suggest the Galaxy A41 could get a 6.1-inch display with an in-display fingerprint scanner hidden underneath. The panel could also house a 25MP selfie camera. 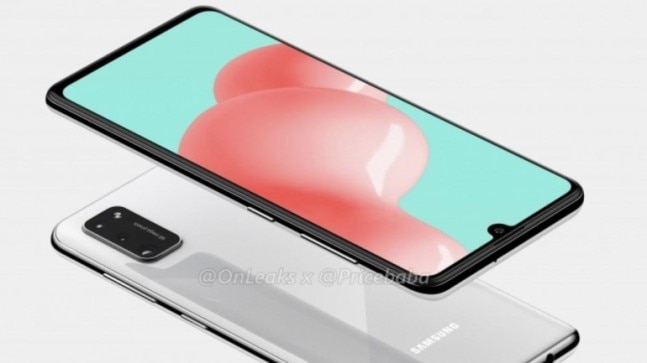 South Korean tech giant, Samsung, recently launched the Galaxy M31 as its first budget segment offering of 2020, and now there are reports that the phone maker could be looking to add to that list by announcing its second budget segment device this year.

The device is said to be the successor of the Galaxy A40 launched last year and is said to be called the Galaxy A41. Fresh renders of the device courtesy of OnLeaks and PriceBaba claim to reveal crucial details about the smartphone, including the fact that it could pack an Infinity U display that could be 6.1-inches in size. The panel would also house a 25-megapixel selfie camera inside the notch.

The CAD renders also show a glimpse of the back of the phone, with the device's rear camera set-up being shown to be quite different from what has previously been seen on Samsung Galaxy A40. Unlike the phone from last year, the new phone is said to come with a triple camera set-up at the back, with the primary lens tipped to be a 48-megapixel one. The second camera in the list is being said to be a 2-megapixel macro camera. Interestingly, the alignment of the cameras appears to be very similar to what we've seen in the Galaxy S20 series.

The phone is also shown to get a 3.5mm headphone jack with a USB-C port for charging sat next to it. There also doesn't appear to be a fingerprint scanner on the device, thereby hinting the phone could be coming in with an under-display scanner.

Apart from this, there is little else known about the device. The specs of the device remain unknown, however, if the Galaxy A40 is anything to go by, the phone could come with a decent budget-mid-range Exynos chipset.

However, a Geekbench listing that's alleged to be of the phone has earlier claimed that the Galaxy A41could come with the MediaTek Helio P65 chipset with 4GB of RAM and Android 10. For now though, these remain in the realm of speculation and more should be known about it once the phone gets closer to its eventual launch.