Launched as the successor to the original Galaxy Fold, the Galaxy Z Fold 2 brings meaningful upgrades at a more affordable price than its predecessor. It is packed with exciting folding screen tech but it is also not a phone you should buy. It has been over a year since Samsung launched its first foldable phone, the Galaxy Fold, in India. At the time of its launch, the Galaxy Fold represented a leap into an unknown future, one that could catapult not just Samsung, but the whole smartphone industry towards a new and exciting era of mobile telephony.

A year on, we've seen a number of new foldable devices make their way to the market, with the latest being the Galaxy Z Fold 2. Launched as the successor to the original Fold, this new foldable device comes at a more affordable price than its predecessor -- Rs 1,49,999 -- and is currently available for pre-order via Samsung's website.

As the third consumer-grade foldable smartphone from Samsung's stables, the Galaxy Z Fold 2 promises a far more refined experience than we've seen on the Fold last year. Despite the design remaining largely the same, Samsung has added meaningful upgrades to the phone to make it a more well-balanced offering. While using the device, we could see the difference. For the better.

While we haven't had the chance to use the device for a long duration we did have access to the device for a few hours, which thankfully was enough for us to form our first impressions about it. To begin with, the first thing you'd notice about the Galaxy Z Fold 2 is its unique form factor. Much like the Galaxy Fold, the Galaxy Z Fold 2 also features a book design that sees the phone fold from the middle to close into a book-like design. The phone is available in Mystic Black and Mystic Bronze colours. The unit sent to us was the latter in colour, and honestly, it looks so much better in terms of design than the Galaxy Fold from last year.

The matte finish at the back is definitely an upgrade over the Galaxy Fold's glossy rear, while the secondary display on the device is also better and bigger at 6.23-inches than what we saw in the first edition of the device. The outer display now covers almost the entire area of the front of the phone, instead of just a part of it as we saw on last year's Galaxy Fold. The front display has also been equipped with a selfie camera housed within a punch hole.

This screen has very little in terms of bezels and feels like a modern-all screen solution and the tall panel sports a 25:9 aspect ratio, and can churn out a fixed resolution of 2260 x 816 pixels. In terms of performance and user experience, this new tall display is arguably the biggest upgrade over the last year's phone, as it now allows for a more relatable smartphone experience without actually having to open the phone for every small interaction. 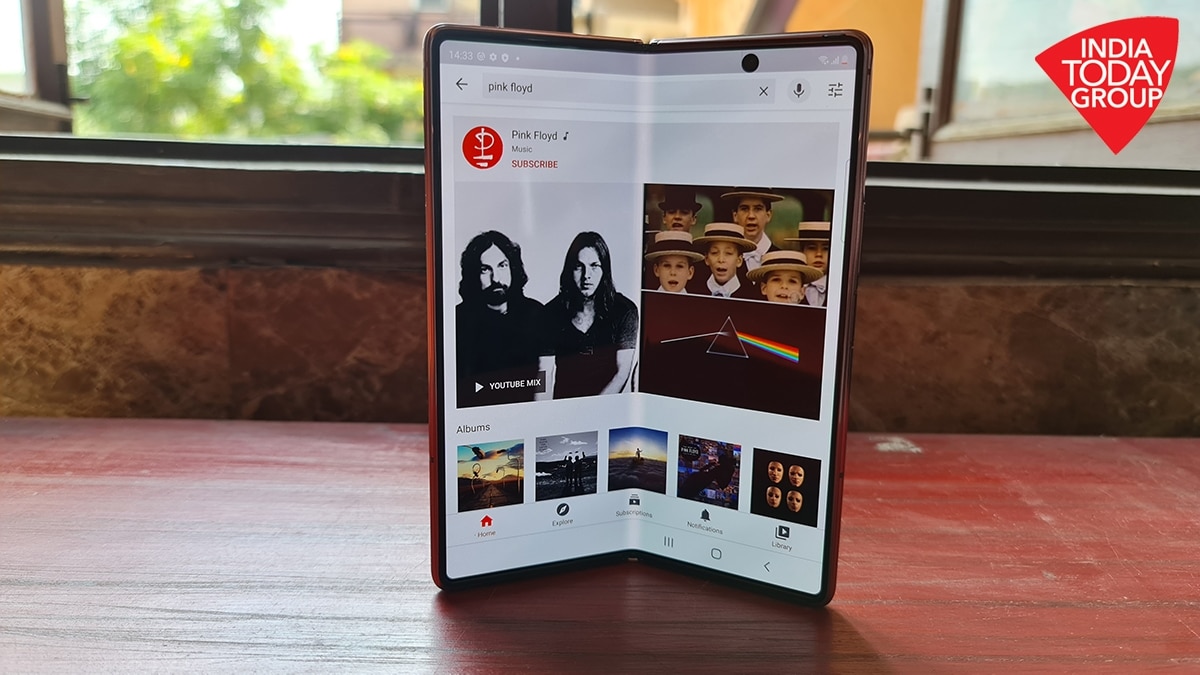 On the inside, Samsung has equipped the phone with a 7.6-inch foldable AMOLED panel with a resolution of 1768 x 2208 but capable of refreshing at 120Hz. In the little time we spent with it, we found the display to be quite good, with punchy colours and deep blacks. The display crease too is far less visible this time around, and overall it appears to be a good Samsung display, which left us with little to complain about.

Talking about the crease, it would be important to note that the display rests on a hinge with a similar design to what was seen on the Galaxy Fold. However, Samsung claims to have made some changes to the mechanism, which now makes it more durable than before. While we have no reasons to question the claim, we would still like to reserve our judgment on this for now and wait to test the hinge in our full review of the device.

Another thing of note about the Galaxy Z Fold 2 is that there's no camera notch on the primary display. Instead, we have a cut-out in the foldable panel which houses a 10-megapixel lens. We clicked a few pictures using the camera and found the results satisfactory. 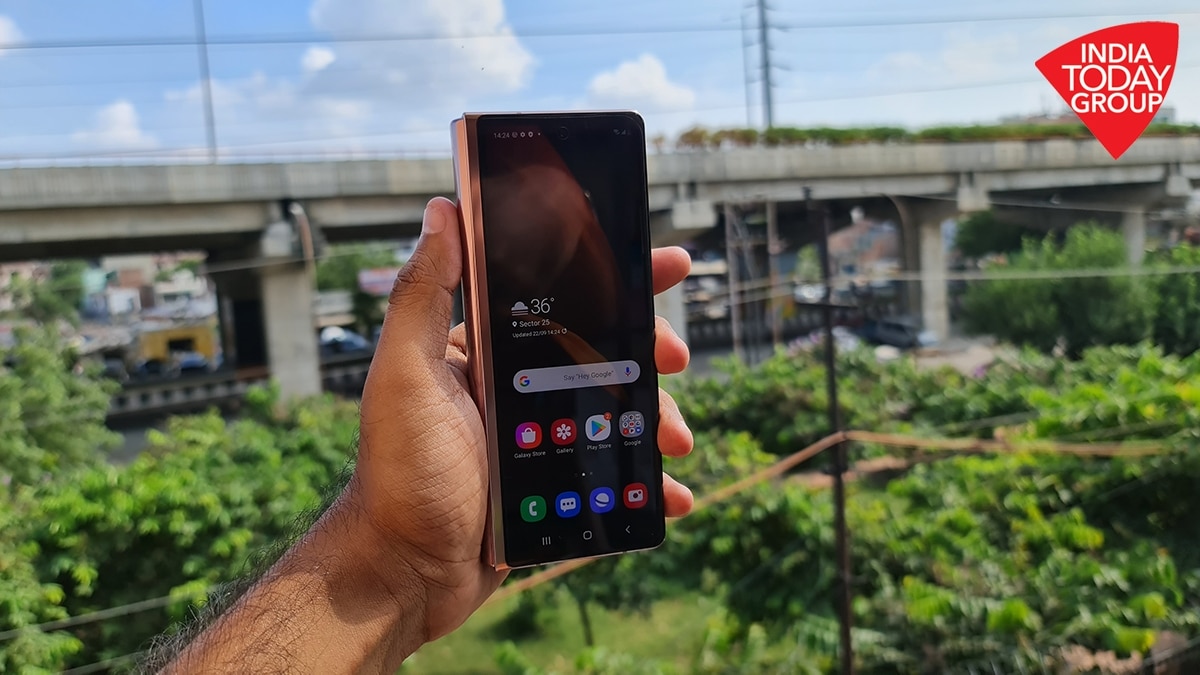 The rear of the phone also houses a familiar three lens protruding camera set-up. Populated by three 12-megapixel sensors -- wide, telephoto, and ultra-wide lenses -- this set-up promises to offer a good photography experience to most users. In our time with the device, we found the primary wide-angle lens to be the best of the lot, with day-time pictures clicked using it looking the best. However, since this is a first impression of the Galaxy Z Fold 2, we would refrain from speaking more on the lens, and reserve any judgment for our detailed review of the device.

Under the hood, the phone comes with the Qualcomm Snapdragon 865+ processor with up to 256GB of storage and 12GB of RAM. This core configuration, at least on paper, looks quite impressive and should give the phone enough power to handle any and everything you throw at it.

For the battery, the phone comes with a 4500mAh pack which we could not run through a complete charge during our limited hours with the device. This we believe is because of the coming together of the big battery pack, a power-efficient chipset, and a panel that according to Samsung's claims is better at handling energy than the one on the original Galaxy Fold. 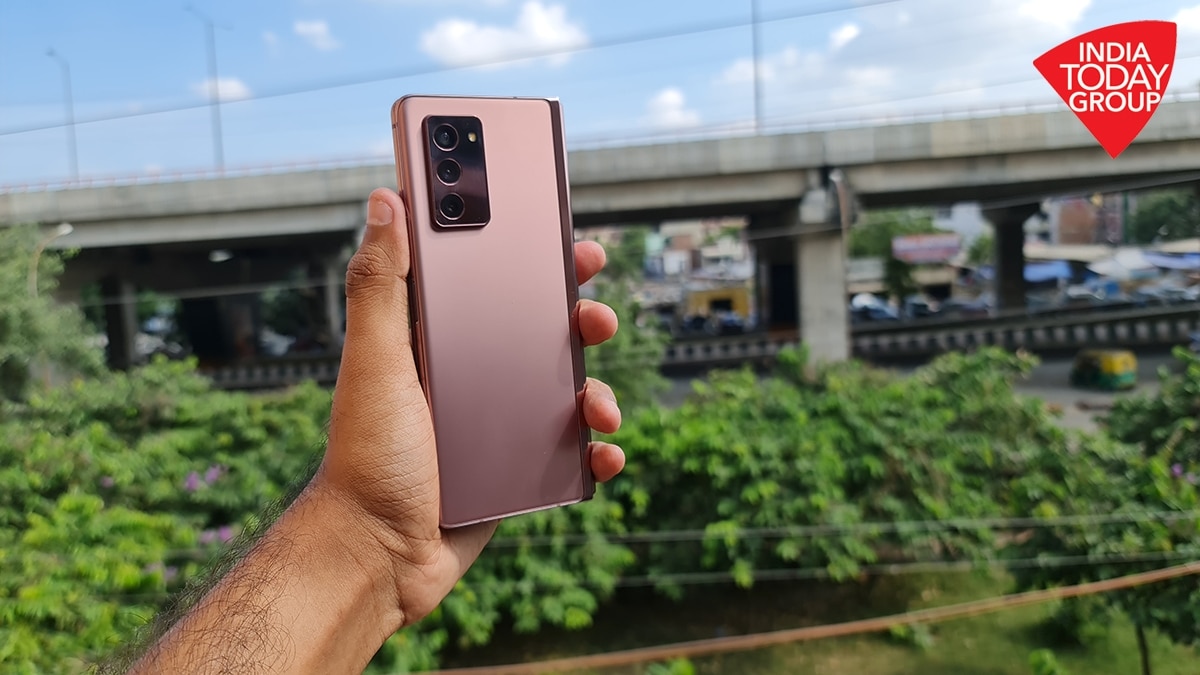 Should you buy Galaxy Z Fold 2?

The answer is -- a reserved no. Why reserved? Because in one case it does make sense to buy the Galaxy Z Fold 2. If you want a phone to flaunt, you should choose the Galaxy Z Fold 2. By virtue of its foldable screen, it is a unique phone that is bound to draw attention from your friends, or for that matter strangers, if you take it out at a party.

On the balance of things, our initial impressions of the Galaxy Z Fold 2 is positive, as the device impressed us both in terms of design and performance. Yet, there are a few issues that still remain, like the overall awkward form factor of the device, and the lingering feeling of the Galaxy Z Fold 2 not being the sturdy device that it is being advertised to be. But the latter's something we'll get to know during our detailed review of the phone.

But it is not a practical phone. It is expensive, it is still based on technology that is evolving and it does less than what a phone like the OnePlus 8 Pro, iPhone 11, or the Samsung Galaxy S20 or the Galaxy Note 20 Ultra can do. So, for now, for most regular users a regular phone and not one with a foldable screen remains a better bet.