Realme Book looks like a bigger MacBook in leaked renders, but would it offer better performance?

Realme said it would launch its first laptop called the Realme Book some time in the second half of 2021.

Realme is going to launch its first laptop, the Realme Book, in the second half of this year. I am not sure about the exact timeline for the launch, but it sure seems like at least two-three months away from today. That may be a bit disappointing for Realme fans awaiting the launch, but a new round of leaks will cheer you up. Several renders of the Realme Book have leaked online and they reveal the colour options that you are likely to get with the laptop. And what I see here is an inflated MacBook, but that is going to be just about it, because Realme's laptop's performance may not be on par with what Apple can offer through its M1-powered MacBooks.

The Realme Book will come in Real Red, Real Blue, Real Apricot, and Real Grey colours, according to the leak. The renders that arrived previously already showed off the Real Grey colour variant, and these new ones show off the rest. These colours look sublime, which is unlike Realme, which believes in exuberant designs and finishes. The design language here seems to be in line with that of the Apple MacBook, which has a metallic finish. The Realme Blue colour variant looks very similar to the Blue colour variant of the iPhone 12 Pro.

OnLeaks has shared one too many photos of the Realme Book (via 91Mobiles), and in addition to confirming the colourways this laptop is likely to come in, they also give a better, fuller look at it. The Realme Book is expected to have a tall display in a 4:3 aspect ratio, and the images show what that would mean in terms of the design. The display is definitely taller than what most conventional laptops come with. But even with its tall display, the laptop looks identical to the Apple MacBook. That is not surprising because a lot of laptops do. There is a wide trackpad, as well, on the laptop, which is also something you see on the Apple MacBook. 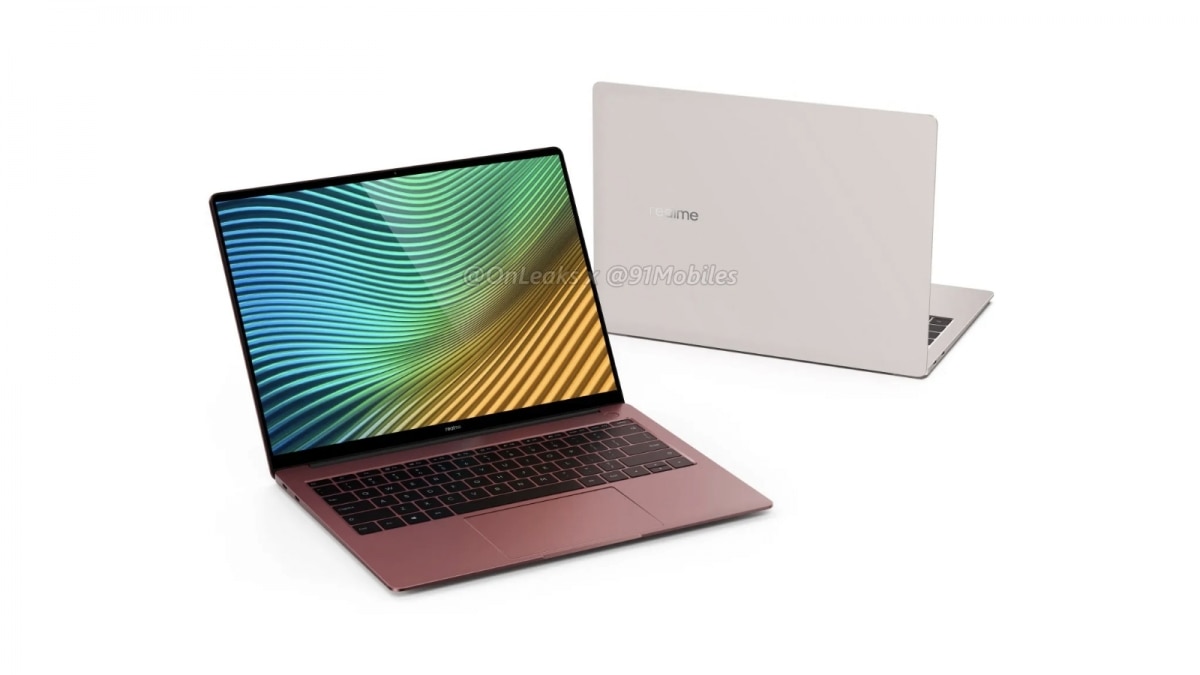 The reason why most manufacturers go for a MacBook-like design is the sense of familiarity with Apple's laptop. People are quick to recognise a MacBook and a similar design. The Realme Book may not exactly be as powerful as the MacBook, but it definitely will appeal to customers because of that design.

The Realme Book is going to have USB-C ports, among other connectivity options, which also reminds me of the MacBook. But while Apple made that design popular, it is now likely to backtrack to bringing the HDMI port and the SD card slot back -- something a majority of Windows laptops come with. And that is why it makes little sense to go for the design that is going to go out of fashion in the coming months. Anyway, Realme may have an explanation for this.

According to rumours, the Realme Book will come with a 14-inch LCD with an LED backlight. This display is going to support Full-HD resolution, but whether it will support a high refresh rate is not clear at the moment. The laptop is likely to use an 11th Gen Intel Core processor, most likely the Core i3 and the Core i5 SKUs, which means the performance on the laptop is going to be on par with the Mi Notebook, but it will be no match for Apple's MacBooks with the M1processor can deliver. Realme already confirmed the laptop will support Windows 11 as and when it is rolled out, which means there is going to be a good level of security on the laptop, as required by Microsoft.

Rumours are rife that the Realme Book is going to cost less than Rs 40,000, which will pit it against the Mi Notebook in the Indian market.