PIB too had also warned users about the fake message that claims the government is recording the calls and messages of users.

As the ongoing tussle between WhatsApp and the Indian government over intermediary guidelines intensifies, a viral message claiming government will record conversations of users causes panic among users. The message is being widely circulated on WhatsApp and has been drafted in such a way that any user will fall for it, but you should not. The Press Information Bureau too has warned users against the same. WhatsApp had never rolled out three blue ticks and the government can not access the messages or calls of people.

The message which carries a total of nineteen points written in capital letters claims to inform users about the new WhatsApp rules. It says that the new communication rule "will be implemented from tomorrow". The viral message claims that WhatsApp will introduce three blue ticks which will notify that the government has taken note of the message and if the two of the three ticks turn blue and one turns red, it would mean that the government can take action against you. If two of three blue ticks turn red and one remains blue, it would mean that the government is checking your information and if you get three red ticks, it would mean has started legal proceedings against you, and you will get summoned by court soon. 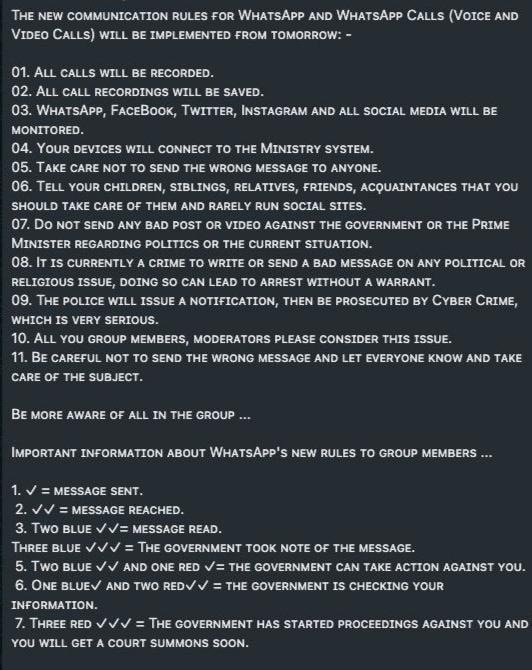 Before you start reading the entire message, do note that it is completely fake and has been sent to create panic among users. No calls will be recorded, no recordings will be saved as claimed. Neither will your phones be connected to the ministry system. The viral message also turns preachy a bit and advises users to not send wrong messages to anyone, which you anyway should not. The message also claims that if you send anything against the government you will be dragged to court. Whoever has drafted the message seems like a good storyteller and has spent a lot of time in creating something that would mislead users and create panic amongst users. You should not believe any message or any message claiming to be an announcement until the government makes it official. You can always rely on the verified government handles for the announcements related to the government.

PIB too has tweeted about the viral message doing the rounds on WhatsApp. "Fake News Alert ! Messages circulating on Social Media reading 'WhatsApp info regarding tick marks' is Fake. No! The Government is doing no such thing. The message is Fake," the tweet says.