Union Budget 2019: Watch out for these revisions in Income tax slabs Union Budget 2019: In the Interim Budget, then Finance Minister Piyush Goyal announced income tax rebate for individual taxpayers with taxable annual income up to Rs 5 lakh. While three crore taxpayers benefited from this announcement, Goyal had nothing to offer to those with taxable income above Rs 5 lakh, apart from hiked up standard deduction and TDS thresholds. The big question now is whether the country's first full-time finance minister, Nirmala Sitharaman, can do one better in the Budget 2019 and make more of the salaried class happier.

Industry chamber Assocham, in its pre-Budget memorandum, has suggested hiking the basic exemption limit for an individual income tax payee to Rs 5 lakh from the current Rs 2.50 lakh considering inflationary impact over the years. Many experts concur with this view.

According to Kuldip Kumar, Partner & Leader, Personal Tax, PwC India, the government's move to extend full tax rebate to income up to Rs 5 lakh - it was capped at Rs 3.5 lakh previously - largely benefited the lower income group. "The government may [now] raise the basic exemption limit by Rs 50,000 [to Rs 3 lakh] extending the benefit to all," he added. If this comes to pass, a significant number of Indians stand to benefit. 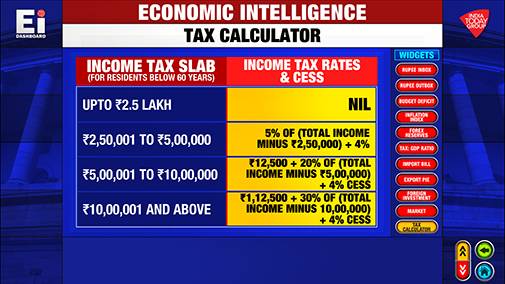 Assocham and the CII, in fact, have both recommended zero tax till Rs 5 lakh considering inflationary impact over the years. If accepted, this move will reportedly benefit around 4.50 crore taxpayers.

But according to some tax experts, tinkering with the tax exemption limit defeats the purpose behind the extended tax rebate, which helped taxpayers with net taxable annual income up to Rs 5 lakh save Rs 13,000 although they still have to file income tax returns. On the other hand, increasing the basic exemption limit will mean that many more taxpayers will no longer have to file their returns. And that goes against the Narendra Modi-led government's agenda of widening the taxpayer base. Moreover, income tax collections have been lower than expected so hope of a higher exemption ceiling dims further.

Nonetheless, Sitharaman may have other surprises in her budget briefcase. Having gone a step ahead of her predecessors by crowdsourcing ideas for her maiden budget presentation, she has a handle on the common man's wishlist. Topping the list is a revision in income tax slabs and lowering individual rates - a change that economists back in the aftermath of the slowdown in economic growth.

According to Kumar, as an alternative to hiking the income tax exemption limit, Sitharaman could raise the 5 per cent slab from Rs 5 lakh to Rs 7.5 lakh. Other experts suggest that the government could tweak the existing tax slabs in a way that 10 per cent tax rate applies to those earning up to Rs 10 lakh from the existing 20 per cent while those in the Rs 10-15 lakh bracket are taxed at 20 per cent instead of 30 per cent currently.

Many people also want Sitharaman to increase income tax deduction under Section 80C of the Income Tax Act. Naveen Wadhwa, DGM, Taxmann, suggest doubling the threshold to Rs 3 lakh apart from increasing the tax deduction limit for interest on housing loans. "By raising the limit of deduction under Section 80C and for interest on housing loan, the government would be able to channelise more savings in the economy and ensure housing for all under the Pradhan Mantri Awas Yojana," he said.

But given the current fiscal situation, can Sitharaman delight the salaried class on July 5?