Although belonging to the EcoSport line-up, the Ford EcoSport Storm 2019 has some distinguishing features of its own, the four-wheel drive being the most significant of them.

The Ford EcoSport Strom was released in Brazil after being spotted earlier this month with some very noticeable cosmetic upgrades. This rugged iteration of the popular compact SUV comes with four-wheel drive, along with beefed up exterior and upgrades in the interiors.

Although belonging to the EcoSport line-up, the Ford EcoSport Storm 2019 has some distinguishing features of its own, the four-wheel drive being the most significant of them. This is the only SUV to come with 4WD with Auto Flex traction, according to claims by Ford. The Ford EcoSport Storm 2019 runs on a four-cylinder 2.0-litre engine which takes gasoline and ethanol. On gasoline, the motor can churn out 170hp of max power and 202Nm of max torque, whereas on ethanol, it can produce up to 176hp power and 221Nm torque. The EcoSport Storm comes with six-speed automatic transmission with paddle shift. 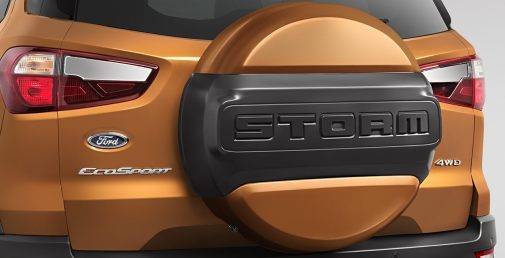 The first that can be noticed is the 'Storm' lettering on the blackened grille, similar to what has been seen on the F-50 Raptor by the company. Black has been used abundantly inside and out of the car, with black accents running across the bonnet, black decals on the sides with Storm lettering, black rear view mirrors and black door handles.

The Ford EcoSport Storm has ebony black leather on seats, and the dashboard is in black with orange details. The central console features an 8.0-inch infotainment system which can connect to Android Auto and Apple Car Play. The instrument panel is a 4.2-inch customisable multifunctional LCD display.