Royal Enfield has finally revealed the new Interceptor 650 and the Continental GT 650; two bikes that are build ground up with an all new chassis but still carry the strong legacy of the Royal Enfield DNA.

Royal Enfield has finally revealed the new Interceptor 650 and the Continental GT 650; two bikes that are build ground up with an all new chassis but still carry the strong legacy of the Royal Enfield DNA. The bikes also get a fresh 648cc engine that is built for both city-riding and highway-cruising.The twin motorcycles are powered by 650 cc twin engine that revs up 47 Bhp (brake horsepower) of power.

The Twins have been built to compete with the likes of Harley Davidson Street 750 and Triumph Street Twin. These RE bikes are built to easily cruise at speeds north of 150Kmph on European and American roads. The company's production unit in Chennai will also help them set prices that can undercut the competition by a significant margin.

The bikes will be first made available in the European market and then will be launched in other markets across the globe. The bikes were launched at EICMA Motor Show in Milan. The company claims that most markets will start receiving the bike from April next year.

"The bikes are in last stage of production. We expect to launch in some markets starting April next year and then through the year across various global other global geographies," Royal Enfield CEO Siddhartha Lal said here in the sidelines of EICMA 2017 here. 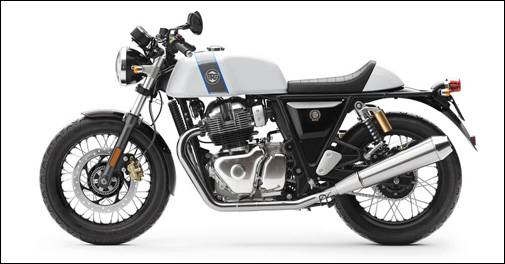 There has been no talk about the price as for now as the bikes are still in the pre-production phase.

The Continental GT 650 design looks true to its cafe racer dna has leaning ride stance. On the contrary, the Interceptor 650 comes with a relatively high handle bar for a better cruising experience on the bike.

When it comes to the all new 648cc 650 Parallel Twin engine, the company chose a more modest engine in terms of power to initialize most buyers to this new segment without sacrificing on the current Royal Enfield loyalists. The design of the new engine takes visual cues from the 1948 500 Twin, which was in circulation for just ten years.

The Twin is estimated to have a cruising range of 120-135 kmph. The engine comes mated with a six-speed gearbox that also gets slip-assist clutch to reduce the lever effort. The 648cc engine will make 47PS of peak power at 7,100rpm and 52nm torque at 4000rpm. "The 650 twins offer a very evocative option to customers in mature motorcycle markets such as Europe, Australia and North America. For us this marks the beginning of a new chapter at Royal Enfield," Lal said.
With inputs from PTI