Packaging a deal is just one part of the tale; the sale process for Air India could fail again without a buyer having such a big appetite.

It remains to be seen what does the second term of Modi government holds for Air India.
Manu Kaushik

What will happen to Air India in the second term of the Modi government? Will there be an immediate sell-off or will the government wait for the right time to divest? As per some reports, the ministry of civil aviation has retained global consultancy firm EY to advice on the divestment process which will begin shortly - likely in the second half of 2019/20. Keeping EY as the transaction advisor makes sense since the firm has already spent months weighing the strengths and weaknesses of the national carrier.

As Will McAvoy, the fictional character played by Jeff Daniels in the hugely popular series The Newsroom, said: "The first step in solving a problem is recognising there is one". The issue with AI is that it has a whole host of problems to deal with. But the one that it needs to prioritise is the sale offer document (expression of interest or EoI as it was called) that the airline floated early last year to divest 76 per cent stake in the airline. 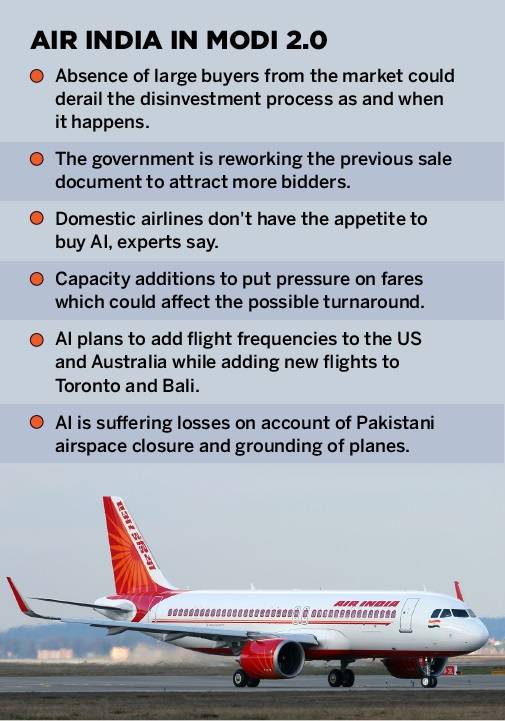 The shortcomings of the sale document - and why it failed to attract investors - are fairly known, but one can assume that the government is working on the side to settle some of those issues. For instance, a special purpose vehicle (SPV) was formed in February to shift over half of AI's debt (not backed by assets) - Rs 29,464 crore to be precise - to this new entity so that the new buyer can start with a lot less burden. The proceeds from disinvestment will go into paying off the debt of the SPV which also houses four AI subsidiaries out of which just one is profitable (AIATSL).

The remaining debt of Rs 28,887 crore, most of which is backed by assets, is going to be set off by the new buyer. Now that's a big discount! As per the last EoI, the buyer had to take over Rs 33,392 crore of debt and liabilities of AI and Air India Express as part of debt reallocation. From the asset-debt equation, the proposition is going to be tempting considering that AI and AI Express own 87 aircraft - 26 wide-bodies and 61 narrow-bodies - that could square off the huge debt burden that the new buyer will have to incur.

AI holds the best slots in domestic and international airports which cannot be monetised but will be of immense value to a suitor. Besides, the airline owns prime real estate in key metros that the current management has not been able to sell because of valuing them higher than the market price. According to some reports, AI could sell nearly 10 of the 56 properties that it had put up for sale early this year. A new buyer with a clear motive to reduce debt could offload some of these assets.

AI is also reportedly planning to increase flight frequencies to the US and Australia and add new flights to Toronto and Bali in its winter schedule. The airline is hoping a significant upside in topline and bottomline as a result.

Despite these plus points, the government might find it daunting to end its nearly 70 years of ownership in the national carrier. Packaging a deal is just one part of the tale; the sale process could fail again without a buyer having such a big appetite. "There aren't many buyers in the market. In terms of timing, until the Jet issue is resolved, there's no point in initiating AI's sale. I believe that the existing carriers like IndiGo and SpiceJet are unlikely to snap it up," says Dhiraj Mathur, a former partner at PwC. IndiGo was one of the first carriers to express interest in AI's international operations but it backed off after reading the terms of sale document.

"Only big groups like Tatas or Hindujas or a large foreign carrier have the resources and ability to take over a large carrier like AI. They have already expressed their reservations about aviation deals that come with certain conditions," says an aviation consultant.

For instance, in the case of AI, the sale document restricted the hiring-and-firing of employees for at least a year after the takeover. Also, the 76 per cent stake sale was a dampener that raised fears amongst investors of the government's constant involvement in the running of the airline after sell-off. Though there are reports that the government may sell 100 per cent stake this time. "The new buyer would also need a free hand in constituting the workforce, and almost entire control over the airline," says a consultant.

Then, the high capacity additions planned by LCCs like IndiGo and SpiceJet are expected to put pressure on fares for the next few quarters. Any potential buyer looking at AI seriously would consider that scenario before moving forward.

Even though the government has relaxed the FDI rules for AI (allowing 49 per cent stake to foreign carriers), the bureaucratic set-up at the Rajiv Gandhi Bhawan continues to scare global investors. In the recently-concluded Paris Air Show, Qatar Airways' CEO is Akbar Al Baker said that red tape-ism and vested interests are delaying its India entry. That rules out one potential big investor from the list.

By all accounts, AI is in a bigger mess than Jet Airways ever was. While Jet has no chance of flying again, but just before its bad times had started, the comparable condition of Jet was superior to AI - in both operational and financial aspects. The only thing that differentiates AI from Jet is the backing of the government for the former.

In three financial years to 2017/18, Jet posted net losses in just one year (Rs 636.45 crore in 2017/18) whereas AI has been making losses since the merger with its domestic operations arm Indian Airlines in 2007. The merger decision was taken more than a decade ago wherein two entirely different organisations with dissimilar equipment and human resources practices continue to drag AI down.

For several years now, the national carrier is dependent on taxpayers' money to stay afloat. AI has already exhausting over Rs 27,195 crore (out of Rs 30,000 crore funds) that was approved by the UPA government as part of a turnaround plan (TAP) in 2012. The airline is now facing an acute shortage of funds and is waiting for fresh equity from the government which has stopped funding since last year. Recently, Israeli media has recently reported that Air India is on the verge of bankruptcy. Air India refuted the claims though.

When Jet was collapsing, the sector was expecting AI to benefit the most because of its large domestic and international operations. Mired in its funding crunch issue, AI couldn't capitalise on the Jet opportunity, and carriers like IndiGo, SpiceJet and others raced ahead. About 17 planes out of the 140 aircraft operated by AI are grounded because the airline doesn't have enough money to keep them flying. All these aircraft - Airbus A320s, Boeing 777s and Boeing 787s - have engine issues, and the severe cash crunch has stalled the maintenance of these aircraft. Air India is hopeful that these planes will be operational by August.

In 2018, the aviation sector, including AI, was hit by the rise in ATF (aviation turbine fuel) prices and rupee depreciation, and this year, the closure of Pakistani airspace is hitting the airline hard. Pakistani airspace remains closed for Indian carriers since the Balakot airstrike in February. The Pakistani government is expected to review its decision after June 28. According to some estimates, the AI flights are now taking about 90 minutes more to connect to European destinations such as Rome, Paris, Frankfurt, London and Madrid whereas the flights to the US is extended by about two hours.

The airline cannot shut down or scale down these flights as well because there are legal and diplomatic repercussions. For instance, when it suspended Delhi to Madrid flights in March, there was a huge backlash. The passengers who had booked for Air India flights on this sector threatened to take legal action against the airline. Due to bilateral agreements between India and Spain, the government intervened, and AI had to resume flights within 15 days. "The suspension of flights is not an option even if it has to bear losses on a daily basis," says an aviation consultant.

With the accumulation of losses worth thousands of crores, the national carrier has been reduced to an entity that serves strategic purposes of the government - such as flights to select African countries to counter Chinese presence - or assist in emergency evacuations. It's difficult to quantify the strategic functions but these purposes cannot be supported purely through public money. NITI Aayog in its 2017 report on Air India had stated that further financial support in a mature and competitive aviation market would not be the best use of scarce financial resources of the government.

The disinvestment track-record of the Modi-I government has been fairly decent but despite making all-out efforts like targeting foreign airlines like Lufthansa and Air France-KLM through international road-shows, it couldn't secure a buyer last time. It seems that the same story is bound to repeat.