SpiceHealth has signed a Memorandum of Understanding with the Indian Council of Medical Research for setting up testing facilities and collection centres across the nation. 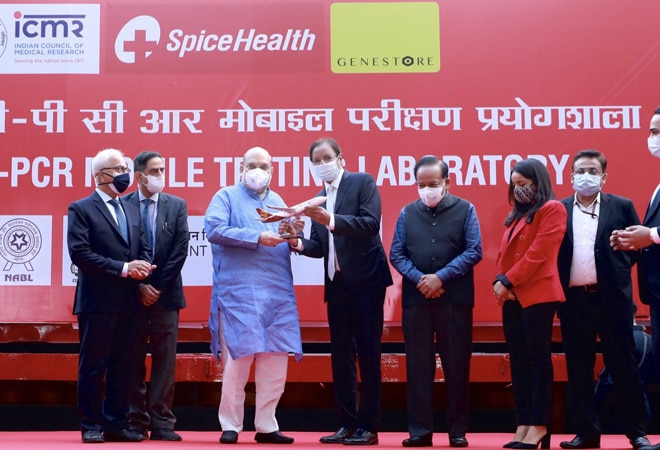 SpiceHealth, a healthcare company founded by the promoters of low-cost carrier SpiceJet, announced on November 23 that it would conduct Real-Time Polymerase Chain Reaction (RT-PCR) tests, touted as the most decisive and crucial test for COVID-19, starting at Rs 499.

The company also claimed that the test report will be generated in a record time of 6 hours after sample collection, in stark contrast to the current 24 to 48 hours it takes at most places. The RT-PCR is currently the most commonly used and the most accurate test for COVID-19 worldwide.

Interestingly, this announcement came on the same day as Maharashtra made RT-PCR tests mandatory for people travelling from states of Delhi, Rajasthan, and Gujarat to the state.

SpiceHealth, led by Avani Singh, said it had partnered with GeneStore to set up a number of portable testing facilities across the country to make the highly sensitive RT-PCR testing readily accessible.

"By offering RT-PCR test at a fraction of the current price, ensuring a much faster turnaround time of just six hours, and deploying mobile laboratories which are easily transportable to the remotest areas, we hope to significantly scale up testing across the country," says Avani Singh, CEO, SpiceHealth. Global CEO of GeneStore, Abhay Sinha also added, "This joint venture ensures the large scale availability of highly affordable infectious disease diagnostics in India. The complete backward integration from manufacturing to testing has enabled this partnership to transfer the cost-benefit to the end consumer in this critical time where accessibility to Gold-Standard-Testing is highly critical."

SpiceHealth has also signed a Memorandum of Understanding (MoU) with the Indian Council of Medical Research (ICMR) for setting up testing facilities and collection centres across the nation. Coming under the Make-In-India initiative, the first testing facility has been set up at the ICMR, AIIMS in Delhi, while each testing laboratory will have the capacity to process 3,000 test reports-a-day. A significant proportion of these tests will be conducted in collaboration with state representatives and government agencies, says the MoU.

SpiceJet has also introduced a Fingertip Pulse Oximeter, a device that enables people to measure the oxygen level of blood with ease. Before SpiceHealth, the founders of SpiceJet also rolled out SpiceOxy - a compact and non-invasive ventilation device, which aids people with mild to moderate breathing issues.

The first series of mobile labs at the ICMR headquarters at AIIMS was launched by Home Minister Amit Shah on Monday.

COVID-19 crisis: Even little bit of carelessness can be dangerous, says Ashok Gehlot