As a result of the combination of lower receipts and higher spending, the aggregate fiscal deficit stood at 36.5 per cent of budgeted estimates in the first quarter The total receipts of the states contracted 18.2 per cent y-o-y in April-June '20

Fiscal deficit of 14 states reached 36.5 per cent of the budgeted estimates (BE) in the first quarter of current fiscal and saw over a two-fold jump from the previous years.  Based on the monthly accounts available for 14 states, together accounting for almost 63 per cent of all states, the aggregate receipts of the states declined 18.2 per cent year-on-year (y-o-y) in Q1FY21, while total spending grew by just 2.7 per cent. 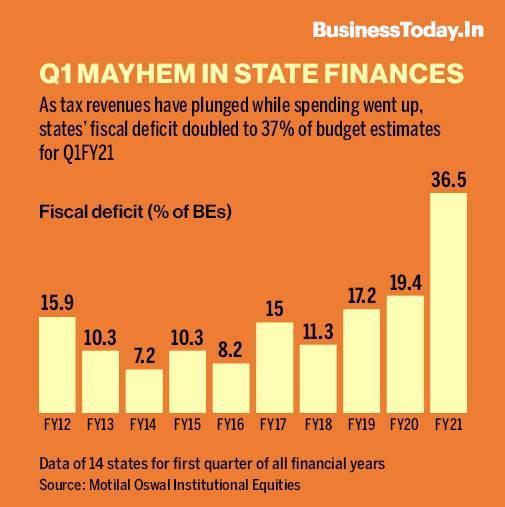 The total receipts of the states contracted 18.2 per cent y-o-y in April-June '20, following a 2.1 per cent decline in Q1FY20 and 1.6 per cent growth in Q4FY20. Against a collapse in receipts, total expenditure in these states grew modestly by 2.7 per cent during the quarter. This was in contrast to growth of 1.1 per cent and decline of 7.4 per cent in the above matching periods, highlighted a Motilal Oswal Institutional Equities report. As a result of the combination of lower receipts and higher spending, the aggregate fiscal deficit stood at 36.5 per cent of BE in the first quarter. "This is more than double the average of 16 per cent seen during the previous three years and 14 per cent average during the previous five years.

Total taxes collected by the states, including devolution from the Centre (which accounted for 64 per cent of all receipts), declined by almost a third in the June quarter. Similarly, states' own non-tax revenue receipts, accounting for almost 5 per cent of all receipts, declined 27 per cent, y-o-y, in the first quarter. What saved the states was the 56 per cent growth seen in 'grants from the Centre'," the report said.

Modest growth in states' total spending was disproportionately distributed between revenue (current) and capital expenditure. Aggregate revenue spending in 14 states grew 9.7 per cent, following 2.7 per cent growth in Q1FY20 and 6.1 per cent y-o-y decline in Q4FY20. On the contrary, states' aggregate capital spending (including loans and advances) contracted 43.5 per cent, marking the fourth decline in the past five quarters, it said.