Over 30,000 indirect employees will be jobless since they earned their living from units associated with the company such as suppliers, logistics, transport, copper wire units and other allied activities. These jobs will remain suspended as long as the plant is in shutdown. 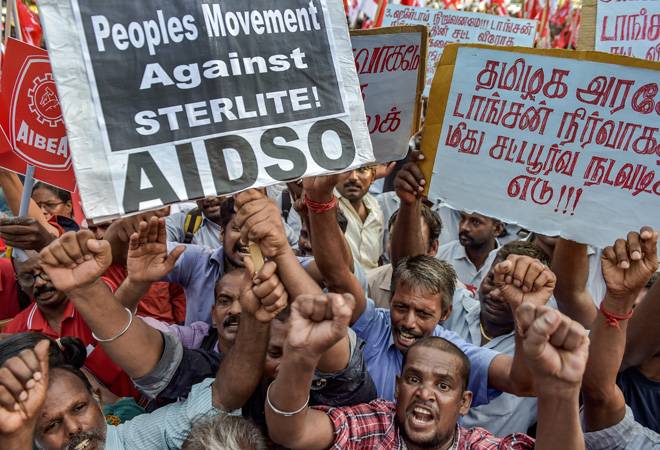 The protests have been on for nearly 100 days. Photo: PTI

Nearly 32,500 jobs have been axed in Tuticorin as Sterlite Copper deals with the fallout of the violent protests and the scheduled, as well as forced, shutdown of the copper smelting plant. The protests claimed 12 lives while twenty-four others were injured.

Sterlite Copper's Tuticorin plant employs 3,500 directly and another 30,000-40,000 indirectly. Of the direct employees, 2,500 are contract workers who have been issued notices under 'force majeure' clause of their contracts, Sterlite Copper CEO P Ramnath told BusinessToday.In. The company has retained the 1,000 employees on its rolls for the time being. Nearly all of the 30,000 indirect employees will be jobless since they earned their living from units associated with the company such as suppliers, logistics, transport, copper wire units and other allied activities. These jobs will remain suspended as long as the plant is in shutdown.

The protests have been on for nearly 100 days. However, they took a turn for the worse when protestors began ransacking and putting vehicles and public property on fire. Police action claimed nearly a dozen lives. Madurai bench of the Madras High Court has also stayed the doubling of Sterlite Copper's capacity from 4 lakh tonnes to 8 lakh tonnes at Tuticorin.

The company claims it is currently in a once-in-four-year planned and 'extended' shutdown for 45 days since March 27 for repairs and maintenance activities. The planned shutdown ends in the first week of June. However, the Tamil Nadu Pollution Control Board has refused to renew the licence to operate the plant since April, citing three major violations: that the plant does not comply with environmental laws, has dumped copper slag in river and has failed to provide reports of the groundwater analysis of nearby borewells. Sterlite denies all these charges. However, the TN Pollution Control Board has rejected the company's application to renew the licence to operate the plant beyond March, 2018.

"The government has not yet renewed the consent to operate. We have approached the appellate tribunal. The next hearing is on June 6. Hopefully, we should be able to get a verdict on that. Based on that we will take it forward," says Ramnath.

On being asked why the TN Pollution Control Board has not cleared the licence for the plant to operate, Ramnath said: "I don't know. The reasons would be best known to them. Whatever reasons they have stated these are things we've already been complying with. They themselves have been coming on a monthly basis and taking groundwater sample."

On the allegations of the plant being the cause of cancer to natives in the area, Ramnath says: "These are all unfounded rumours being propagated. This plant has been there for the last 20 years and we have families who live just half a kilometre away from the plant. All these families are living proof that there is nothing wrong. They are spreading rumours that cancer in Tuticorin is because of the copper. If you look at hard data, out of the 32 districts in Tamil Nadu, Tuticorin comes somewhere 14th or 15th in cancer among males and 25th in cancer among females. Chennai and Kanchipuram are in the top 6. There is no correlation and no proof of what they are saying."

Regarding the allegations of dumping slag in the river, Ramnath says, "That is also not true. The pollution control board has itself approved usage of copper slag for landfill. Nearly eight years ago we had sold this material to a third party for landfill in his low-lying area. He has used this slag for landfill. His plot of land is next to a (water) channel. Over eight years, the course of the water has changed and because of that the soil has got eroded. Some of the slag has come into the water. We are being held responsible for that after eight years of having sold that for a landfilling application."

Also read: All you need to know about Tuticorin stir

India approaches WTO with complaints against US steel tariffs