In two separate suits filed in New York, one by former founder of New Silk Route Rajat Gupta and other by former CFO & compliance officer Rishi Gupta have red-flagged a $4 million transaction allegedly done on late V G Siddhartha's behest to an unknown entity Welland Investments, but there is more ... Two suits filed in the US courts point towards a likely round-tripping of money by late VG Siddhartha with the help of founding general partner of New Silk Route (NSR), Parag Saxena. Both suits hint at an alleged $4 million (over 18 crores/2011 exchange rate) transaction done by Sical Logistics (now a Coffee Day Enterprise (CDEL) company) in FY11.

While the first suit was filed in the United States District Court for the Southern District of New York as early as October 7 last year by Rishi Gupta, former chief compliance officer (COO) and chief financial officer (CFO) of the US based private equity firm NSR, the other was filed last month in Supreme Court of the State of New York County of Westchester by Rajat Gupta, the former founder of NSR.

As alleged in the two suits filed in the US, the transaction is related to siphoning of money upon maturity of foreign currency convertible bonds (FCCBs) held by NSR funds in Chennai-based Sical Logistics Limited. The investment in the company was made shortly before an open offer was made by Tanglin Retail Reality Developments Private Limited (CDEL Company) in 2010.

In September 2010, NSR through a subsidiary named Leigh Capital purchased bonds in Sical Logistics, whose value was around $14.35 million. The bonds on maturity in April of 2011 fetched around $19.1 million.

However, the $4 million of profit was never booked on NSR's books. Rishi Gupta, who had raised concern on the transaction, was told the money was wired to an entity called 'Welland Investments' and was allegedly asked to steer clear.

Corroborating Rishi's stance, Rajat Gupta's suit also claims: "In June of 2011, Saxena announced that Leigh had actually entered into a participation agreement with a company named Welland Investments ("Welland") whereby Welland was to guaranty Leigh's investment in SICAL and provide a fixed return in exchange for 100% of the profits from the bond transaction." 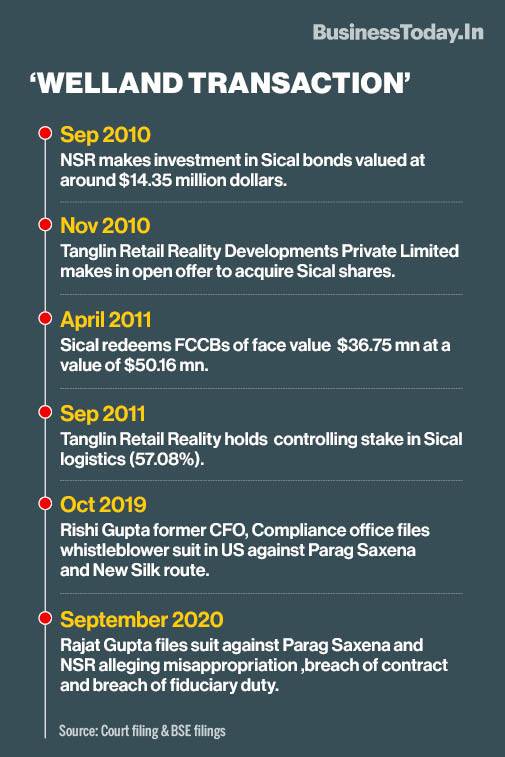 Two points raise suspicion over why the NSR's Sical transaction could have been done in order to benefit late V G Siddhartha (a long-time friend of Parag Saxena). One, the timing of the investment, which was just months before Coffee Day's open offer. The FCCBs investment was made in September of 2010 and the open offer was made in November 2010. The bond investment reaped nearly 35 percent profit in just seven months.

Filings on BSE also show what could be a part of this dealing. The open offer document filed by Sical on November 18, 2010 said the company had issued Zero Coupon Convertible Bonds (FCCBs), which would entitle the bond holders to 28,96,004 shares upon conversion. A subsequent filing on the stock exchange on April 20, 2011 tells, Sical had redeemed the outstanding FCCBs of face value $36.75 million on maturity date April 19, 2011 at a value of $50.16 million.

Two, during the same time frame (2010-2011), NSR was actively investing in Coffee Day Enterprises. The DRHP filed by the CDEL at the time of IPO makes it amply clear that Arduino Holdings Limited & NSR PE Mauritius LLC (both NSR entities) were already investors in Coffee Day by March 2010. A source who was aware of these transactions on the condition of anonymity said: "There was also early concern at the price at which NSR had invested into Coffee Day."

However, as KKR and Standard Chartered were also investing into Coffee Day around the same price, the source said NSR went ahead and justified the investments due to better terms compared to other investors. He further said: "When looked at as a whole it raises several questions of propriety."

Both Rajat and Rishi have named an unknown entity 'Welland Investments', where Parag Saxena, one of the founders of NSR, facilitated a $4 million transfer allegedly on the behest of VG Siddhartha. Rajat Gupta's suit mentions (without certainty) 'Welland' being listed on LinkedIn as a fashion company with 1-10 employees and to have never provided a balance sheet or any other financial information to support its purported guarantee of Leigh's roughly $15 million investment in Sical bonds.

However, research by BusinessToday.In points out another suspicious London-based entity 'Welland Investments Limited' which hints at a possible transaction of this nature. The entity's Companies House filing (UK's RoC) for the year ending December 2010 shows cash in the bank to be around $4,190,682 million, which at the end of December 2011 stood at $1,091,746 million. 'Welland,' which earned profits of $44,44 in 2010, posted a $12,410 loss by the end of 2011.

Auditor's note in the filings says, "Due to the uncertainty over the disclosure of related parties to the company, we have not been able to ascertain whether the company has complied with the requirements of FRS 8 Related Party Disclosure."  Interestingly, this company changed its name to CONNECOR (UK) Limited in 2014. The annual filing by the company on March 11, 2010 states Paul Kythreotis, Daniel Skordis as the directors and 'Hansa Mercator Ltd' (formerly registered in British Virgin Island and later shifted to Cyprus) as the shareholder.

These are names that pop up in Panama papers as well. Again, the auditors note in the filing mentions: "The directors have decided not to disclose the ultimate controlling party in the accounts. This is a departure from the requirements of FRS 8 Related Party Disclosure. The related party transactions can be found in accounts of Hansa Mercator Ltd."

BusinessToday.In has not been able to independently verify Hansa Mercator Limited's transaction for the same period.  Reply to a detailed questionnaire sent to CDEL and NSR is awaited. The copy will be updated upon the receipt of the replies.