The Bharat Bandh strike, which has the support of major bank unions, farmers' unions and teachers' associations, has received significant support from workers all the across the country. 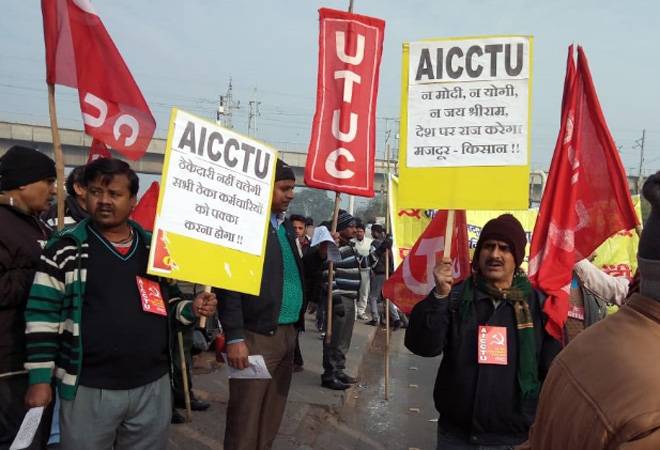 Bharat Bandh Live: On the second day of Bharat Bandh on Wednesday, several roads and railway lines are being blocked by the central trade unions members protesting against the Narendra Modi government. Some reports of attacks on buses have also emerged from West Bengal and Kolkata. The Bharat Bandh strike, which has the support of major bank unions, farmers' unions, and teachers' associations, has received significant support from all the workers across the country. The day-to-day banking services are also suffering due to the Bharat Bandh call, causing inconvenience in banking services like depositing cheques, demand drafts, and cash deposit. People are also facing problems in withdrawing cash as ATMs in several areas have been running dry.

04:10 pm: Reports of banking services being slightly hit in branches of public sector banks in Telangana are coming in, as bank employees affiliated to All India Bank Employees Association and Bank Employees Federation of India took part in the strike. Apart from that, the 40-hour nationwide bandh called by central trade unions has been uneventful in the state.

04:01 pm: Protestors stopped trains at a few places in Tamil Nadu under the 48-hour Bharat Bandh. Meanwhile, trade unions staged a protest march in New Delhi, with members of the trade unions behind the bandh marching from Mandi House.

01:30 pm: A treasury branch of the State Bank of India in Thiruvananthapuram, Kerala was attacked as the 48-hour trade union strike entered its second day. The branch manager said a group of people came to his cabin at around 10:00 am and threatened the staff, damaged a glass table top and a computer. No additional police security was sought as the security staff was on duty, he added.

12.07 pm: Cheques worth about Rs 20,000 crore could not be cleared by the clearing houses all over the country yesterday, claimed AIBEA General Secretary CH Vekatchalam.

11.55 am: In view of the strike, the West Bengal government has asked bus drivers to wear helmet while driving.

11.46 am: Several PSU bank employees came in support of the nation-wide strike call given by 10 central trade unions.

11.18 am: Two students injured during protests in West Bengal.

11.13 am: All India Trade Union Congress General Secretary Amarjeet Kaur told PTI that there will be a complete bandh in Goa and Bihar, while 100 per cent strike is expected in other parts of the country too.

11.11 am: Normal life disrupts in some parts of the country. CPM leader Sujan Chakraborty along with other protestors detained by police.

Kolkata: CPM leader Sujan Chakraborty along with other protestors detained by police while they were participating in the two-day nationwide strike called by Central Trade Unions demanding minimum wages and social security schemes among others. #WestBengalpic.twitter.com/umdCeJitKc

10.30 am: The 10 central trade unions (CTUs), which have given a call for the two-day Bharat Bandh are protesting the government's snub of their 12-point charter of demands, seeking minimum wage of Rs 18,000, social security for workers and issue related to price rise.