Bharat bandh news: Due to Bharat Bandh, the rail and road transportation services are likely to be affected in parts of the country as the farmers' unions have said that all small and big roads and trains will be blocked. 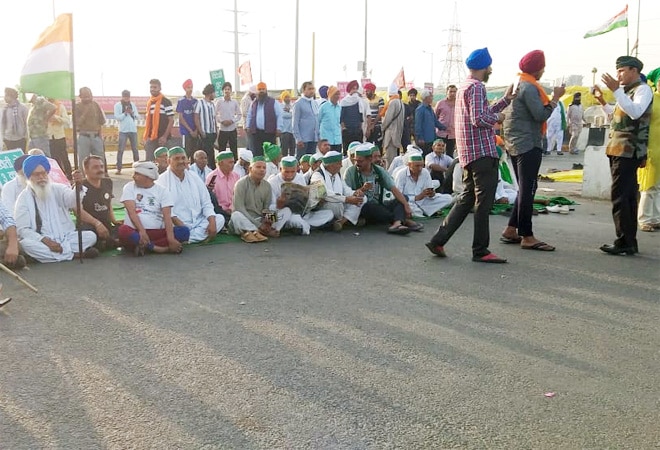 Thousands of farmers are observing a 12-hour long 'Bharat bandh' today to strengthen their four-month agitation against the Centre's three contentious farm laws passed in September last year. The bandh is called by Samyukta Kisan Morcha (SKM) that began at 6 am on Friday and will conclude at 6 pm on the same day. The Bharat bandh is likely to impact the transport services as well as escalate the traffic problem, especially in the national capital Delhi.

According to a statement released by the SKM, farmers have been protesting on the borders of Delhi for the last four months and instead of accepting their demands, the government is discrediting them completely.

Here's all you need to know about Bharat Bandh:

1. Rail and road transportation may get affected

Due to Bharat Bandh, the rail and road transportation services are likely to be affected in parts of the country as the farmers' unions have said that all small and big roads and trains will be blocked.

Punjab: Protestors block railway track in Amritsar as a mark of protest against the three agricultural laws during 'Bharat Bandh' called by Samyukt Kisan Morcha pic.twitter.com/dAZgfXa3yw

2. Markets may remain close in several parts of the country

The SKM has appealed to close all shops, malls, markets, and institutions on Bharat Bandh day. All services will remain suspended except for ambulance and other essential services.

3. Farmers may not observe bandh in poll-bound states

The SKM leaders said in poll-bound Tamil Nadu, Assam, West Bengal, Kerala and Puducherry, the farmers will not be observing Bharat Bandh.

The Chambers of Trade and Industry, a body representing traders in Delhi, said they support farmers' demand but shops and factories will remain open during the 'Bharat Bandh'.  "We discussed it with business owners and traders. Most of them said they support the demands of the farmers and the Centre should find a solution to the issue," CTI chairman Subhash Khandelwal said.

The Odisha government has declared the closure of all educational institutions across the state in view of the nationwide Bharat Bandh.

The Delhi Police said adequate security arrangements have been put in place in view of the 'Bharat Bandh'. Delhi Police PRO Chinmoy Biswal said there will be intense patrolling to maintain peace in the national capital.

8. Why farmers have called for Bharat Bandh

Farmers want to intensify their months-long agitation, asking the Centre to repeal the three agricultural laws. They have also asked for the cancellation of all police cases against farmers, rollback of "electricity bill and pollution bill" and cut in fuel prices.

Thousands of farmers, mainly from Punjab, Haryana, and western Uttar Pradesh, have been camping at Singhu, Tikri and Ghazipur since November 26, demanding a complete repeal of the three farm laws and a legal guarantee for the minimum support price of their crops. So far, there have been 11 rounds of talks between the protesting unions and government, but the deadlock continues as both sides stuck to their stands. In January, the government offered to suspend the farm laws for 12-18 months, which was rejected by the farmer unions.

Antilia case: What was in 5 bags Sachin Vaze carried to Mumbai hotel with mystery woman? Inside details here