Retailers of made in China Holi-wares face the risk of adverse customer sentiment as that is not driven by rational thoughts, especially when it comes to toys that are meant for children 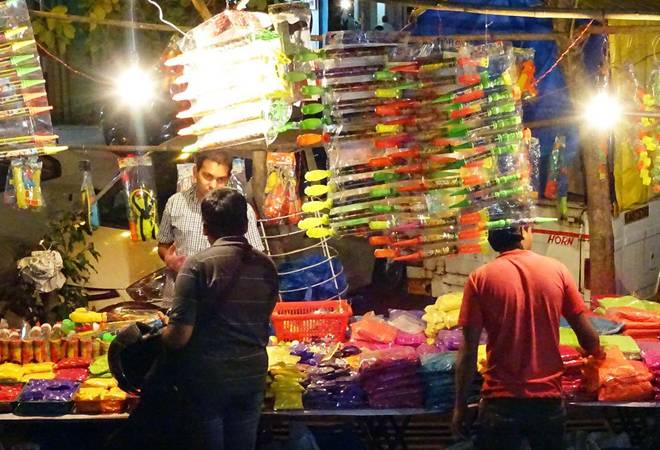 WhatsApp messages are notorious for its misuse as a tool for baseless scaremongering. One such message, which is circulating among the toy traders of North India these days is the possibility of coronavirus infected pichkaris (sprinklers) and water colours that could arrive from China. If true, nothing could be more deadly than this as India's biggest festival Holi is just weeks ahead and use of  pichkaris and colours, which get sold in lakhs, if not crores. New coronavirus, which originated in China, has killed over a thousand people in that country and has spread to several other countries prompting World Health Organisation to term it as a "Global Health Emergency".

Luckily, this particular WhatsApp forward is nothing but rubbish. First of all, no virus can survive weeks long transit inside pichkaris. No virus can spread through water spray or colour powders. Even though almost every pichkari and colour that we use are being imported from China, none of that we are going to purchase this time would have been shipped from that country after the outbreak of the disease. All the stocks for Holi season are already in Indian warehouses, at least a month in advance. The only risk, retailers of made in China Holi-wares in India have, at the moment is adverse customer sentiment as that is not driven by rational thoughts, especially when it comes to toys that are meant for children. Countrywide awareness programmes to avoid coronavirus linked scaremongering is the need of the hour, not just to help boost toy sales, but also to save Indian citizens from baseless fear.

Well, scaremongering is the least of the worries. Coronavirus is causing more problems than one that of perception to Indian toy industry at the moment. The stocks for Holi (which commences on March 10), should not be a problem, but traders have no way to replenish their stocks as they are too much dependent on China for their supplies. Since electronic components are also mostly imported from China, Indian manufacturers of battery operated toys or toys containing battery operated parts are also in trouble. Unless China resumes production, and fresh consignments reach Indian shores, there is a medium term production and supply crisis.

"China factories were shut for new year from the first week of January. The last time we loaded our containers (not just for toys sector, but in general) was perhaps on 15th of January. Whatever containers that have been shipped from China, must have already reached India too. There will be no more arrivals for another three months now", Vipin Nijhawan, vice president, Toy Association of India (TAI) says.

Nijhawan, a prominent Delhi based toy importer and manufacturer, says almost 70 percent of his stocks are already sold out. " Only 30 percent stock remains. If you don't have enough varieties (of toys) you cannot sell, so it is a bit difficult to sell the balance. If everything goes well in China, the next stocks will start arriving in India only by end of April or first week of May. Till then we will have a supply constraint", he says.

This problem is the same with every importer, but toys industry, given its heavy dependence on China, is more vulnerable.

Global market research firm IMARC estimates India's toys market to be worth US$ 1.5 Billion (over Rs 10,000 crore). There is no way to corroborate the numbers as toys trade and industry is largely un-organised in India. What we do know is that India imported toys worth Rs 2,127 crore in 2018-19. Almost 90 per cent of that, Rs 1,828 crore was from China. Another Rs 93 crore worth of toys came from Hong Kong during the same time. Considering that the retail price of imported products are often several multiples of the invoice price, IMARC may not be too off mark in its estimates.

The immediate causality of this over dependence on China is an increase in price. Delhi based retailers say the price of almost every toy has been hiked 30 to 40 per cent after the outbreak of coronavirus in China. Nijhawan agrees. "The traders know they will not get fresh stocks in the next two to three months. That is why they are selling it for higher prices. Demand is still there, the problem is with supply", he said.

The government has also done its bit to increase the prices of toys in the country. Finance Minister, in Union Budget 2020-21, increased customs duty on all imported toys by 200 per cent - from 20 per cent duty to 60 per cent. The duty hike has resulted in protests from across all major trading hubs of the country. Kolkata traders shut down their business for a day in protest. Mumbai traders complain it will result in the closure of small retail businesses. " In last 2 years we have seen the import duty on toys has been increased around 500 per cent. This step will make the toys unaffordable for the customers, decreasing the sales of toys tremendously and adversely affecting the livelihood of millions of people employed in toy industry across India", says Abdullah Sharif, Vice- President of United Toys Association, Mumbai.

In addition to the duty hike and the coronavirus linked supply disruption, there is also a move to make safety standards more stringent for toys that are sold - imported or made - in India. Debasree Chaudhuri, minister of State for Women & Child Development has gone on record over the government's plans to notify a "Quality Control Order" for toys to check the quality of toys imported and manufactured in India. Even though the government has assured the toy industry that the safety standards will not be too cumbersome for the industry, it is bound to shake up the sector which is predominantly micro and small scale.

Indian toy sector is bracing for a change. But at the moment it is shortage of stocks that matter. The WhatsApp status message of several large suppliers say "no fresh orders taken". Until that change, be ready to spend more for your toys.