Decoding slowdown: Investment is falling; neither central government nor private sector shows any appetite for it Few would disagree with the Economic Survey of 2018-19 when it makes a case for investment as the "key driver" of India's growth - in line with the Chinese experience, as it says - which would create capacity, increase labour productivity, introduce new technology, allow creative destruction and generate jobs. Except, this seem highly unlikely in the current situation.

Here is a look at the state of investment - by both the central government and private corporate sector. This decline in expenditure is driven by the government's priority to contain fiscal deficit - which has indeed been brought down from 4.8% of the GDP in 2010-11 to 3.4% in 2018-19. The Economic Survey of 2018-19, as do several studies, explain that contrary to earlier years when tax buoyancy took care of fiscal consolidation, that is no more so.

In January this year, the Centre for Monitoring Indian Economy (CMIE), which tracks new projects, pointed out that fresh investment in the public sector had reached 14 years low with an announcement of fresh investments of Rs 50,604 crore in the December quarter of 2018-19 - the lowest since December 2004.

Now that the government has set its priority on reducing the fiscal deficit to 3.3% - a target it failed to achieve last fiscal - and its revenue on a persistent downward swing, there is little room for increasing investment in near future.

The shrinking central government expenditure has everything to do with shrinking tax revenue. The total revenue receipt has fallen from 10.1% of the GDP in 2010-11 to 8.2% in 2018-19. 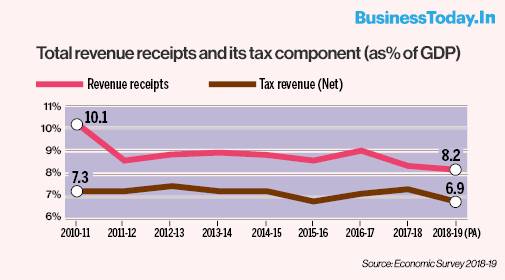 The tax revenue is set to dip further.

Further, last week's announcement by the finance minister withdrawing angel tax, surcharges on foreign portfolio investors and those earning more than Rs 2 crore and an upfront capital infusion of Rs 70,000 crore into public sector banks would reduce the scope for investment.

If the government investment is going down, so do the private investment.

The RBI, which tracks capital expenditure (capex) plans of private corporate sector (projects that are already 'funded' by financial institutions, including through their IPOs), finds that both the 'animal spirits' and the 'business sentiments' are missing since 2010-11. There is one difference between these two sets of data. There is often a time lag between the envisaged or declared investment (capex plans) and the investments that has already been realised (GFCF). The annual growth rates of the two show a parallel movement over a long horizon, as could be seen in the following graph. 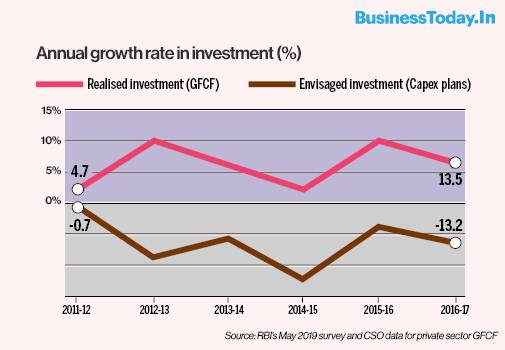 The trend reflected by the CSO data (up to 2016-17), however, runs contrary to the RBI data on sectoral deployment of bank credits.

According to the RBI, growth in the bank credit to industry has witnessed a sharp fall from 24.4% of the GDP in 2010 to 6.9% in 2019, reflecting poor appetite of the industry to investment. Besides, industrial production and capacity utilisation also run contrary to the CSO trend. Eminent economists C Rangarajan and DK Srivastava recently raised doubts about the CSO data on private investment by observing that it runs counter to what the industry leaders have been saying and what other data sources such as CMIE indicate, "casting some doubts on the veracity of the figures".

Last week, the Finance Minister Nirmala Sitharaman reiterated her budget promise of investing Rs 100 lakh crore in infrastructure over the next five years. This sounds good except that no fund has been allocated for it nor has she explained where the resources would come from.

Here is a sobering thought.

The 2019-20 Budget's total revenue target is just a fraction of it - Rs 19.63 lakh crore, out of which Rs 16.5 lakh crore would be tax revenue and Rs 3.13 lakh crore non-tax revenue, including anything that disinvestment would generate.

So where will the money come from?

Even if the RBI transfers Rs 1,76,051 crore to the central government, as was announced on Monday night, that would not be much, given that the 2019-20 Budget had already accounted for Rs 90,000 crore of it as a part of its non-tax revenue receipts --  a total of Rs 1.06 lakh crore of dividend/surplus from the RBI and other nationalised banks and financial institutions for 2019-20.

Sovereign overseas borrowing, as proposed in the 2019-20 Budget, no longer seems an option after the sudden transfer of finance secretary Subhash Chandra Garg - who supposed to have pushed for it and paid the price for it (he has applied for voluntary retirement since then) and a strong caution from leading bankers and economists.

That leaves the question abegging: Who or what will bring resources for fresh investment to revive the economy?

No white elephants please! Where not to invest RBI surplus of Rs 1.76 lakh crore